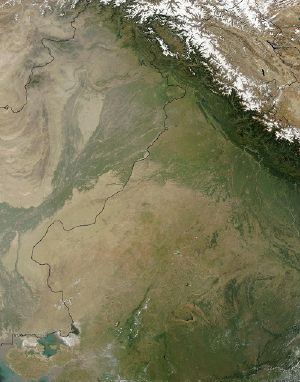 A NASA satellite image of the Thar Desert, with the India-Pakistan border superimposed. The desert is at the center left of the image; the Indus River and its tributaries are to the left side of the desert, and the dark green line at the bottom center of the image is the Aravalli Range.

The Thar Desert, also known as the Great Indian Desert, encompasses 77,000 square miles of rolling sand dunes in eastern Pakistan and the northwestern Indian state of Rajasthan. Small portions of the desert also extend into the Indian states of Haryana, Punjab, and Gujarat, but these states do not exercise extensive control over the region.

The Thar Desert's name derives from the word t'hul, the general term for the region's sand ridges. It is defined by a series of natural borders, including the Aravalli Mountain Range to the southeast and the Punjab plain in the north and northeast. To the west, lies the Indus plain, and to the south, the Rann of Kutch.

The geographic isolation of the Thar Desert by mountain ranges and plains contributes significantly to the weather patterns that shape its distinctive, hot, dry environment. The environment around the Thar effectively absorbs all the rain that is carried in the monsoon clouds before the clouds can reach the desert. The resulting monsoon winds in the desert are hot and dry, and the desert does not share in the wet season experienced in surrounding terrains.

Contributing to the beauty of the Thar is the desert's perpetual motion. While sand dunes are a common occurrence in deserts across the world, the dunes of the Thar are remarkable for their continual motion. The sandy desert floor is always moving.

Origin of the Thar Desert 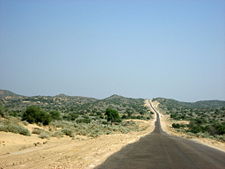 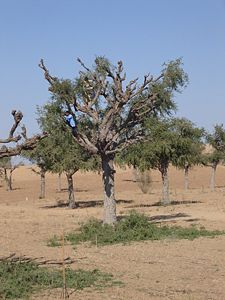 Lopping of Khejri tree for fodder and fuelwood at village Harsawa. 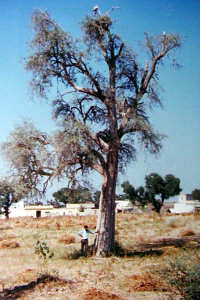 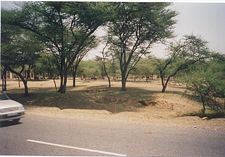 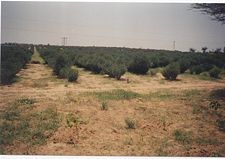 Greening desert with plantations of jojoba at Fatehpur, Shekhawati

The desert city of Jaipur, Rajasthan 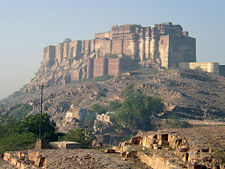 The Mehrangarh Fort in Jodhpur, India

The origin of the Thar Desert is a controversial subject. Some experts consider it to be 4,000 to 10,000 years old, while others maintain that aridity started in this region much earlier.

Another theory states that the area turned to desert relatively recently: Perhaps around 2,000-1,500 B.C.E. Around this time, the Ghaggar River ceased to be a major river. It now terminates in the desert.

It has been observed through remote sensing techniques that Late Quaternary climatic changes and neotectonics have played a significant role in modifying the drainage courses, and a large number of palaeochannels exist.

There are three principal landforms in the desert region:

The Thar Desert is distinguished by a series of rolling sand dunes that vary in height across the desert. While sand dunes are a common occurrence in deserts across the world, the dunes of the Thar are remarkable for their continual motion. In sharp contrast to the mountain ranges that ring the desert, the sandy desert floor is always in motion. The perpetual movement of the desert, while contributing the the desert's beauty, has had a prohibitive effect for permanent human settlement, as the sands can easily be blown over structures. The sands are particularly mobile due to severe winds in the region, which sweep the sands over areas of fertile soil. The layer of sand over much of the available farming land hinders agricultural development in the region. Some of the sand dunes of the Thar have become semi stabilized over time, and while not completely sedentary, these older dunes move only very small degrees. Older sand dunes can reach a height of 500 feet.

Dotted among the sands of the Thar, several salt water lakes provide a unique and welcome environment for desert dwelling creatures. While the water of the lakes cannot be consumed by humans, they support much needed shelter and viable farmland. The abundance of salt water, however, also serves to highlight the extreme lack of drinkable water in the Thar Desert. Annual rainfall in the region is particularly low, measuring from 4-20 inches, most of which falls during the monsoon season. It is difficult to estimate annual precipitation for the Thar Desert however, as rainfall often varies widely from year to year.

The harsh natural environment and extreme temperature variations found in the Thar Desert have combined to severely inhibit the growth of vegetation. Most of the native plants grow in small clumps, without a system of order regulating where the clumps grow or any standard number of plants in a vegetation grouping. The plants which have been most successful in the difficult environment have adapted to the conditions of the desert. It is important, in particular for plants, to have developed water storage systems to be able to provide much needed water to themselves during the dry season. Significant plants of the desert include gum, Arabic acacia, and euphorbia. However, these plants are only found on the rocky slopes of the hills.

Stretches of sand in the desert are interspersed by hillocks and sandy and gravel plains. Due to the diversity of ecosystems that exist within the Thar, a varied and thriving wildlife population calls the desert their home. Both vegetation and animal life in this arid region are very rich. About 23 species of lizard and 25 species of snakes are found here; several of them are endemic to the region.

The most notable example of a preserved ecosystem is the Desert National Park, Jaisalmer, which provides an excellent example of the natural wildlife of the region. In this park, Great Indian Bustards, Blackbucks, Chinkaras, the Indian Gazelle, the Indian Wild Ass, and Desert Foxes are common. These are species which are fast vanishing in other parts of India. Despite the apparent difficulty of life in the desert, the animals in the Desert National Park have found ways to adapt and thrive. The park supports these wild and naturally occurring populations of species that are threatened with existence elsewhere. It is also noted for rich seashell and petrified wood deposits.

The animals which are found in the Desert National Park exhibit many of the adaptations that are necessary for survival in the desert. These animals, along with those animals found outside the reserve, often exhibit a smaller body size, one example of biological adaptation to the region. In addition, many of the desert animals are nocturnal, a trait which allows them to avoid the sweltering heat of the day.

There are certain other factors responsible for the survival of these animals in the desert. Due to the lack of water in this region, transformation of the grasslands into cropland has been very slow. The protection provided to them by a local community, the Bishnois, is also a factor.

The Thar Desert faces a distinct environmental threat from the loss of land through wind erosion. The harsh winds of the Thar sweep the sands across the plains and into its awe–inspiring sand dune formations. However, the winds also erode valuable farming land and threaten livestock grazing areas. In an attempt to hinder the wind erosion, plants species and trees have been planted in many areas to help keep the sands attached to the ground. The new windbreaks also provide much needed shelter.

In order to plant the necessary windbreaks, it has become necessary to import exotic plants into the region. The native plants are noted for their slow growth patterns, and windbreaks must mature quickly to be fully effective. The Acacia tortillis has proven most adaptable to the Thar. While the induction of foreign plants is helping the wind erosion issues, the introduction of exotic plants into any environment threatens to overthrow the preexisting environmental balance.

People of the desert

Religiously, the population of the Thar Desert is divided between among Hindus, Muslims, and Sikhs. The variety of religions in the region has resulted in an extremely intricate system of political and economic ties, which often follow religious lines. Tensions have become more marked in the area, as the population of the region has grown exponentially in recent years. With more people in the desert, agricultural development and extensive animal husbandry have also resulted. Grazing and farming, however, are beginning to take a toll on the desert, and the fertility of the soil is declining as a result. 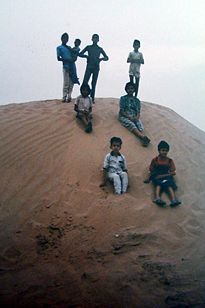 Overall, the living standard of the Thar is low, as traditional exports have difficulty finding a place in modern markets. One new development that has emerged on the scene to replace traditional methods is the rise of Agro-forestry. Under this new system, many crops and fruit–bearing trees have been adapted to provide a steady export to global markets. The use of adapted fruit trees also helps to eradicate the propensity of failure in the region. It is estimated that the use of adapted crop bearing trees can provide up to the triple the traditional profit of a farmer.[1] Significant Agro-forestry species include: Prosopis cineraria, used for animal feed, Tecomella undulata, a valuable source of timber, and Tecomella undulata, used to provide shelter and prevent erosion.

The Thar provides recreational value in terms of desert festivals organized every year. Rajasthan desert festivals, held annually each winter, are celebrated with great zest and zeal. Dressed in brilliantly hued costumes, the people of the desert dance and sing haunting ballads of valor, romance and tragedy. The fair has snake charmers, puppeteers, acrobats and folk performers. Camels, of course, play a stellar role in this festival, where the rich and colorful folk culture of Rajasthan can be seen. 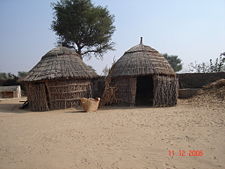 A house in the Thar desert

Camels are an integral part of the desert life and the camel events during the Desert Festival confirm this fact. Special efforts go into dressing the animal for entering the spectacular competition of the best-dressed camel. Other interesting competitions on the fringes are the mustache and turban tying competitions, which not only demonstrate a glorious tradition but also inspire its preservation. Both the turban and the mustache have been centuries old symbols of honor in Rajasthan.

Evenings are meant for the main shows of music and dance. Continuing until late into the night, the number of spectators swells up each night and the grand finale, on the full moon night, takes place by silvery sand dunes.