Louse (plural: Lice) is any of the small, wingless, dorsoventally flattened insects comprising the neopteran order Phthiraptera. This order of over 3,000 species consists mostly of biting, chewing, or sucking members that are obligate external parasites or scavengers on birds and mammals.

Also known as fly babies, every avian order and most mammalian orders are infected with these parasites. However, they are not found on monotremes (the platypus and the echidnas or spiny anteaters) and a few eutherian orders, namely the bats (Chiroptera), whales, dolphins, and porpoises (Cetacea), and pangolins (Pholidota).

Three of the sucking lice of the suborder Anoplura are well-known external parasites on humans: Head lice (Pediculosis humanus capitis), body lice (Pediculosis humanus corporis), and pubic lice (Phthirus pubis). While lice infestations are not dangerous by themselves, they can be a serious health problem given that some lice can be vectors carrying organisms that cause other diseases, such as trench fever, epidemic typhus, and relapsing fever (Frey 2002). Good personal hygiene and care in sexual behaviors are key to preventing infestations.

Historically, the lice have been divided into two main groups, the sucking lice of the suborder Anoplura and the chewing lice of the order Mallophaga. However, Mallophaga now is considered to be paraphyletic and generally the Phthiraptera now are divided into four suborders (ITIS 2004; ITIS 2007).

The term lice often is used more generally for parasitic animals that are not part of Phthiraptera, such as fish lice, which are a group of parasitic crustaceans, and book lice, which are insects that received their name from feeding on the paste used in binding books. 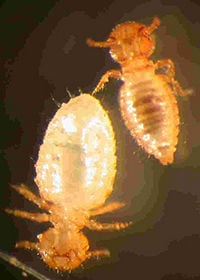 The chewing louse (Damalinia limbata) is found on Angora goats. The male louse (right) is typically smaller than the female (left), whose posterior margin of the abdomen is more rounded than those of male lice.

As lice spend their entire lives on the host, they have developed adaptations that enable them to maintain close contact with the host. These adaptations are reflected in their tiny size (0.5 to 8 millimeters); stout legs and claws that are adapted to cling tightly to hair, fur, and feathers; and a wingless and dorsoventrally flattened body.

The dorso-ventrally flattened body of the louse is divided into head, thorax, and abdomen and there are a pair of eyes and a pair of antennae on the head. A louse's color varies from pale beige to dark gray; however, if feeding on blood, it may become considerably darker.

Lice feed on skin (epidermal) debris, feather parts, [Chlorine] sebaceous secretions, and blood. While some parasitic forms survive by piercing the skin and sucking blood, utilizing piercing mouthparts, others act as scavengers on their host, having chewing mouthparts.

A louse's egg is commonly called a nit. Lice attach their eggs to their host's hair with specialized saliva that results in a bond that is very difficult to separate without specialized products. Living lice eggs tend to be pale white. Dead lice eggs are more yellow.

The order has traditionally been divided into two suborders; the sucking lice (Anoplura) and chewing lice (Mallophaga). However, recent classifications suggest that the Mallophaga are paraphyletic and four suborders are now recognized (ITIS 2007; ITIS 2004):

Humans are unique in that they host three different kinds of lice: Pediculosis humanus capitis (head lice), Pediculosis humanus corporis (body lice, which live mainly in clothing), and Phthirus pubis (pubic lice). All three are members of the Anoplura suborder, and contain sucking mouthparts allowing them to feed on human blood and lay their eggs on the human body or on clothing. The DNA differences between head lice and body lice provide corroborating evidence that humans started wearing clothes at approximately 70,000 B.C.E. (Travis 2003).

Lice infections are known as pediculosis and includes infections of the skin, hair, or genital region caused by lice living directly on the body or on clothing (Frey 2002). The Latin name for louse is the source of the name pediculosis (Frey 2002). 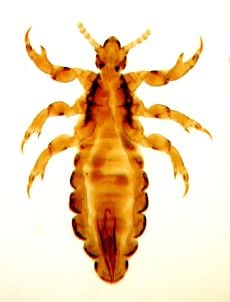 Head lice. The head louse (Pediculus humanus capitis) is an obligate ectoparasite of humans that spend their life on human scalps and feed exclusively on human blood (Buxton 1947). Humans are the only known host of this parasite (Buxton 947). Transmission from person to person can occur by the sharing of combs, hats, or hair brushes, with epidemics common among school-age children (Frey 2002). The head lice is about 0.15 centimeters (0.06 inches) in length. The adult form visible on the scalp and especially around the ears and the grayish-white nits (eggs) may be seen at the base of the hairs (Frey 2002). After the nits hatch (3 to 14 days), they must feed on blood within a day or die (Frey 2002). They may spread to eyebrows, eyelashes, or one's beard. Itching can lead to bacterial infection and there can be swelling or inflammation of the neck glands. Head lice do not spread systemic diseases as do body lice.

Body lice. Body lice (Pediculosis humanus corporis) is similar in size to head lice, but are rarely seen on the human skin because they only come to the skin to feed (Frey 2002). Poor personal hygiene or wearing the same clothing repeatedly without laundering is associated with infestation of body lice, and the lice can spread by shared bedding or personal contact (Frey 2002). Complications of body lice infestations are headache, fever, and bacterial infection, and body lice can spread systemic typhus and other infections. 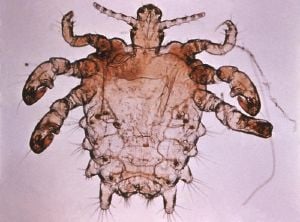 Pubic lice. The pubic or crab louse (Phthirus pubis) spends its entire life on human hair and feeds exclusively on blood. Humans are the only known host of this parasite. The mouthparts are adapted to piercing the skin and sucking blood. The second and third pair of legs, with their terminal claws, are adapted to holding the hair shaft, while the first pair of leg holds the skin during feeding. Abdominal protuberances on the side of the body are characteristic of this species. Males are slightly smaller than females. The eggs are oval-shaped and around 0.8 millimeters (0.03 inches) in length. Immediately after oviposition, they are shiny, round, and transparent. Pubic lice are 1 to 2 millimeters (0.04 to 0.08 inches) in size, varying according to the stage of their development. They are usually whitish-grayish in color though they become reddish-brown for some time after a blood-meal.

Pubic lice is spread commonly by intimate contact, although it also can be spread by using the clothes, bedding, or towels of an infected person (Frey 2002). Usually pubic lice appears on the pubic hair, although it can spread elsewhere, and can appear on the eyelashes of a child born to infected mothers (Frey 2002). Recent DNA evidence suggests that pubic lice spread to the ancestors of humans approximately 3.3 million years ago from the ancestors of gorillas by using an abandoned gorilla nest and other communal areas with them, and are more closely related to lice endemic to gorillas than to other lice species infesting humans (Reed et al. 2007; Smith 2007).