Expressionism generally refers to a twentieth century art movement that began in Germany. Unlike the French impressionists, who were primarily concerned with artistic technique to create a different effect, Expressionism is not primarily driven by technique, but a desire to express emotion. Expressionism is the tendency of an artist to distort reality for an emotional effect; it is a subjective art form. Also, unlike Impressionism, which was limited primarily to painting, Expressionism spread to many art forms, including not only painting, but literature, film, architecture and music. The term may apply to any emotional expression, but it was particularly associated with the expression of angst—the number of cheerful expressionist works is relatively small.

In painting, influenced by the Fauves, Expressionism worked with arbitrary colors as well as jarring compositions. It was not important to reproduce an aesthetically pleasing impression of the artistic subject matter; the Expressionists focused on capturing vivid emotional reactions through powerful colors and dynamic compositions instead. Perhaps the quintessential expression work is Edvard Munch's "The Scream." Painters such as Matthias Grünewald and El Greco have sometime been called expressionist, and while their works bear some resemblance to those of Expressionism, the term applies mainly to twentieth-century works.

Expressionist theater also seeks to display strong emotion. These plays often dramatize the spiritual awakening and sufferings of their protagonists, and are referred to as Stationendramen (station plays), modeled on the episodic presentation of the suffering and death of Jesus in the Stations of the Cross. They depict the struggle against bourgeois values and established authority, personified in the figure of the Father. August Strindberg pioneered this form with his autobiographical trilogy To Damascus.

Taken as a whole, Expressionism reflects a revolt against some of the dehumanizing aspects of modern, urban culture. The angst that it expresses is born of the inability of modern society to meet real human needs, which are spiritual as well as material. 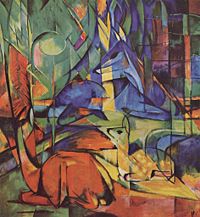 "Elbe Bridge I" by Rolf Nesch 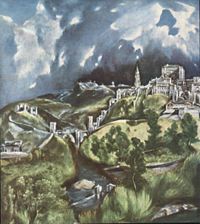 "View of Toledo" by El Greco, 1595/1610 has been pointed out to bear a particularly striking resemblance to twentieth-century expressionism. Historically speaking it is however part of the Mannerism movement.

Origin of the term

Although it is used as term to reference, there has never been a distinct movement that called itself expressionism, apart from the use of the term by Herwald Walden in his Polymic Magazine "Der Sturm" in 1912. The term is usually linked to paintings and graphic work in Germany at the turn of the century which challenged the academic traditions, particularly through Die Brücke and Der Blaue Reiter. Philosopher Friedrich Nietzsche played a key role in originating modern expressionism by clarifying and serving as a conduit for previously neglected currents in ancient art.

In The Birth of Tragedy Nietzsche presented his theory of the ancient dualism between two types of aesthetic experience, namely the "Apollonian" and the "Dionysian"; a dualism between the Apollonian world of the mind, of order, of regularity and polishedness and the Dionysian world of intoxication, chaos, ecstasy. The Apollonian represented the rationally conceived ideal, whereas the Dionysian represented artistic conception proper, originating from man's subconscious. The analogy with the world of the Greek gods typifies the relationship between these extremes: two godsons, incompatible and yet inseparable. According to Nietzsche, both elements are present in any work of art. The basic characteristics of expressionism are Dionysian: bold colors, distorted forms, painted in a careless manner, two-dimensional, without perspective, and based on feelings (the child) rather than rational thought (the adult).

More generally it refers to art that is expressive of intense emotion. It is arguable that all artists are expressive but there is a long line of art production in which heavy emphasis is placed on communication through emotion. Such art often occurs during time of social upheaval, and through the tradition of graphic art there is a powerful and moving record of chaos in Europe from the fifteenth century on: the Protestant Reformation, Peasants' War, Spanish Occupation of Netherlands, the rape, pillage and disaster associated with countless periods of chaos and oppression are presented in the documents of the printmaker. Often the work is unimpressive aesthetically, but almost without exception has the capacity to move the viewer to strong emotions with the drama and often horror of the scenes depicted.

The term was also coined by Czech art historian Antonín Matějček in 1910 as the opposite of impressionism: "An Expressionist wishes, above all, to express himself....[An Expressionist rejects] immediate perception and builds on more complex psychic structures....Impressions and mental images that pass through mental peoples soul as through a filter which rids them of all substantial accretions to produce their clear essence [...and] are assimilated and condense into more general forms, into types, which he transcribes through simple short-hand formulae and symbols." (Gordon, 1987)

Some of the movement's leading visual artists in the early twentieth century were:

There was never a group of artists that called themselves Expressionists. The movement is primarily German and Austrian, though American artists of the late twentieth and early twenty-first century have developed distinct movements that are generally considered part of Expressionism.

There were a number of Expressionist groups in painting, including Der Blaue Reiter and Die Brücke. Later in the twentieth century, the movement influenced a large number of other artists, including the so-called abstract expressionists, the latter consisting primarily of American artists such as Jackson Pollock. At the tail end of the twentieth century, a group of artists in the American South developed a style known as Southern expressionism.

The group Der Blaue Reiter was based in Munich and Die Brücke was based originally in Dresden (although some later moved to Berlin). Die Brücke was active for a longer period than Der blaue Reiter which was only truly together for a year (1912). The expressionists had many influences, among them Munch, Vincent van Gogh, and African art. They also came to know the work being done by the Fauves in Paris.

Influenced by the Fauves, Expressionism worked with arbitrary colors as well as jarring compositions. In reaction and opposition to French Impressionism which focused on rendering the sheer visual appearance of objects, Expressionist artists sought to capture emotions and subjective interpretations: It was not important to reproduce an aesthetically pleasing impression of the artistic subject matter; the Expressonists focused on capturing vivid emotional reactions through powerful colors and dynamic compositions instead.

The "head" of Der Blaue Reiter, Wassily Kandinsky, would take this a step further. He believed that with simple colors and shapes the spectator could perceive the moods and feelings in the paintings, therefore he made the important jump to Abstraction, changing twentieth-century art.

There was also an expressionist movement in film, often referred to as German Expressionism, as many of the important examples of Expressionist film originate in German film from the early twentieth century. The most significant films include The Cabinet of Dr. Caligari (1920), The Golem, Metropolis and Nosferatu, eine Symphonie des Grauens (Nosferatu, a Symphony of Horror).

In literature the novels of Franz Kafka are often described as expressionist. Expressionist poetry also flourished mainly in the German-speaking countries. The most influential expressionist poets were Gottfried Benn, Ernst Barlach or Alfred Döblin.

In the theater, there was a concentrated Expressionist movement in early twentieth-century German theater of which Georg Kaiser and Ernst Toller were the most famous playwrights. Other notable expressionist dramatists included Reinhard Sorge, Walter Hasenclever, Hans Henny Jahnn, and Arnolt Bronnen. They looked back to Swedish playwright August Strindberg and German actor and dramatist Frank Wedekind as precursors of their dramaturgical experiments.

Oskar Kokoschka's 1909 playlet, Murderer, The Hope of Women is often called the first expressionist drama. In it, an unnamed man and woman struggle for dominance. The man brands the woman; she stabs and imprisons him. He frees himself and she falls dead at his touch. As the play ends, he slaughters all around him (in the words of the text) "like mosquitoes." The extreme simplification of characters to mythic types, choral effects, declamatory dialogue and heightened intensity all would become characteristic of later expressionist plays.

Expressionist plays often dramatize the spiritual awakening and sufferings of their protagonists, and are referred to as Stationendramen (station plays), modeled on the episodic presentation of the suffering and death of Jesus in the Stations of the Cross. August Strindberg had pioneered this form with his autobiographical trilogy To Damascus.

The plays often dramatize the struggle against bourgeois values and established authority, often personified in the figure of the Father. In Sorge's The Beggar, (Der Bettler), the young hero's mentally ill father raves about the prospect of mining the riches of Mars; he is finally poisoned by his son. In Bronnen's Parricide (Vatermord), the son stabs his tyrannical father to death, only to have to fend off the frenzied sexual overtures of his mother.

In expressionist drama, the speech is heightened, whether expansive and rhapsodic, or clipped and telegraphic. Director Leopold Jessner became famous for his expressionistic productions, often unfolding on the stark, steeply raked flights of stairs that quickly became his trademark. In the 1920s, expressionism enjoyed a brief period of popularity in the American theater, including plays by Eugene O'Neill (The Hairy Ape, The Emperor Jones and The Great God Brown), Sophie Treadwell (Machinal) and Elmer Rice (The Adding Machine).

In music, Arnold Schoenberg, Anton Webern and Alban Berg, the members of the Second Viennese School, wrote pieces described as expressionist (Schoenberg also made expressionist paintings). Other composers who followed them, such as Ernst Krenek, are often considered as a part of the expressionist movement in music. What distinguished these composers from their contemporaries such as Maurice Ravel, George Gershwin and Igor Stravinsky is that expressionist composers self-consciously used atonality to free their art form from the traditional tonality. They also sought to express the subconscious, the 'inner necessity' and suffering through their highly dissonant musical language. Erwartung and Die Glückliche Hand, by Schoenberg, and Wozzeck, an opera by Alban Berg (based on the play Woyzeck by Georg Büchner), are example of expressionist works. 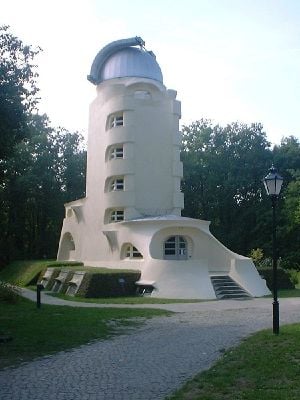 In architecture, two specific buildings are identified as expressionist: Bruno Taut's Glass Pavilion at the Cologne Werkbund Exhibition (1914), and Erich Mendelsohn's Einstein Tower in Potsdam, Germany completed in 1921. Hans Poelzig's Berlin theater (Grosse Schauspielhaus) interior for Max Reinhardt is also sometimes cited. The influential architectural critic and historian, Sigfried Giedion in his book Space, Time and Architecture (1941) dismissed Expressionist architecture as a side show in the development of functionalism. It was only in the 1970s that expressionism in architecture came to be re-evaluated in a more positive light.