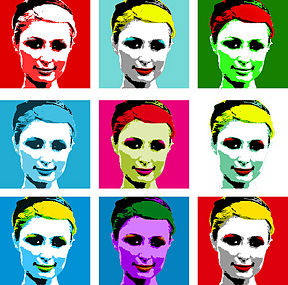 Pop art was a visual artistic movement that first emerged in the early 1950s in Britain and came into its own during the late 1950s in the United States. It was one of the major art movements of the twentieth century. Characterized by themes and techniques drawn from popular mass culture, such as advertising and comic books, Pop art is widely interpreted as either a reaction to the then-dominant ideas of Abstract Expressionism or an expansion upon them. Pop art, like pop music, is aimed to employ images of popular, as opposed to elitist culture in art, emphasizing the banal or "kitschy" elements of any given culture.

Pop art at times targeted a broad audience. However, much of Pop art is considered highly academic, as the unconventional organizational practices used often make it difficult for mass audiences to comprehend. Pop art and Minimalism are considered to be the last modern art movements and thus the precursors to postmodern art. Leading exponents are Richard Hamilton, Andy Warhol, Roy Lichtenstein, Claes Oldenburg, Jasper Johns, and Robert Rauschenberg. 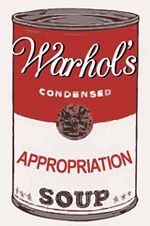 Parody of Andy Warhol's tribute to a can of Campbell's soup.

Pop art brought art back to the material realities of everyday life, to popular culture (hence pop), in which ordinary people derived most of their visual pleasure from television, magazines, or comic books and comic strips. Pop art emerged in the mid-1950s in England, but realized its fullest potential in New York in the 1960s where it shared, with Minimalism, the attentions of the art world. In Pop art, a sense of the epic was replaced with the everyday, and mass-produced commodities were awarded the same significance as the unique. The gulf between high art and low art was thus intentionally eroded. The media and advertising were favorite subjects for Pop art's often witty celebrations of the consumer society.

The term "Pop art" was first used by the English critic Lawrence Alloway in a 1958 issue of Architectural Digest to describe those paintings that celebrate post-war consumerism, defy the psychology of Abstract Expressionism, and worship the god of materialism. The most famous of the Pop artists, the cult figure Andy Warhol, recreated quasi-photographic paintings of people or everyday objects.

The 1950s were a period of optimism in Britain following the end of war-time rationing, and a consumer boom took place. Influenced by the art seen in Eduardo Paolozzi's 1953 exhibition "Parallel between Art and Life" at the Institute for Contemporary Arts, and by American artists such as Jasper Johns and Robert Rauschenberg, British Pop artists such as Richard Hamilton and the Independent Group aimed at broadening taste into more popular, less academic art. Hamilton helped organize the "Man, Machine, and Motion" exhibition in 1955, and "This is Tomorrow," with its landmark image "Just What is it that makes today's home so different, so appealing?" (1956). Pop art thus coincided with the youth and pop-music phenomenon of the 1950s and 1960s, and became very much a part of the image of fashionable, "swinging" London.

Temporally, the British Pop-art movement predated the American. However, American Pop art had its own origins separate from the British. Essentially, the American movement was a response to Abstract Expressionism and marked a return to sharp paintwork and representational art. Its use of images from mass culture and ordinary commerce was a basically new development. 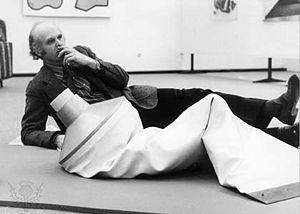 Claes Oldenburg with his sculpture of a used tube of toothpaste

In the late 1950s, the stage was set for the rise of the American Pop art, differing from its European counterpart in its open, playful, and participatory style. Young new artists began to turn to the country's cultural environment for artistic inspiration, and they were heavily influenced by the strong presence of the media. Billboards, cartoons, comic books, and newspaper or magazine advertisements were everywhere, and clearly influenced the styles and work of Pop artists, as did the country's renewed interest in the art of printmaking. American Pop-art objects also featured everyday images and icons of the time—a noted example is Andy Warhol's use of images of Marilyn Monroe.

The Pop art "revolution" began in America in 1958, with Robert Rauschenberg and Jasper Johns and their debut shows at the new Castelli Gallery in Manhattan. Larry Rivers, Roy Lichtenstein, Andy Warhol, and George Segal had all shown their work in New York galleries, but none were Pop artists yet. Jim Dine, Tom Wesselmann, Claes Oldenburg, and Jim Rosenquist were all just arriving in New York from the Midwest. As art and everyday life began to intermingle more and more, these artists became intrigued by this Pop lifestyle with its emphasis on consumer culture. 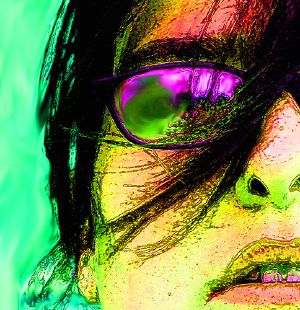 In 1961 and 1962, Claes Oldenburg was first to explore the idea of art as an everyday product when he presented a project entitled "The Store" in his New York studio. The project featured brightly painted objects such as stockings, dresses, shirts, shoes, pies, chocolates, and ice-cream sandwiches made of muslin, plaster, and chicken wire. Oldenburg's "The Store" not only put forth the idea of the "art store," it also suggested the types of objects that, by 1965, would be created in abundance by other Pop artists.

As Oldenburg was instrumental in defining the nature of American Pop art, it was Andy Warhol's serial originals that influenced the rise of the American Pop-art "multiple." His early 1960s hand-painted pictures of Campbell's Soup cans and his use of silk-screening to create countless reproductions of grocery cartons become emblematic of the new genre. Even Warhol's studio name—The Factory—hinted at the importance of commercial exchange to the rise of Pop art in America. 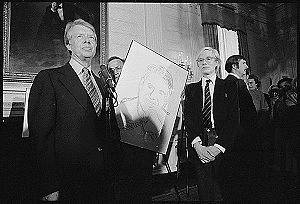 U.S. President Jimmy Carter receives a portrait of himself by its artist, Andy Warhol.

Most American Pop-art multiples were created between 1965 and 1969, with artists following the example of objects in Oldenburg's "The Store" and Warhol's early 1960s "editioned" projects, but also influenced by the founding of an influential Pop-art outlet in New York. A New York newspaper strike led Robert Graham of New York's Graham Gallery to commission an outdoor flag company to produce colorful banners he could hang outside of his gallery to advertise upcoming shows. The Pop designs received great attention, and Graham, art consultant/framemaker Barbara Kulicke, and partner Sonny Sloan formed the Betsy Ross Flag and Banner Company after the newspaper strike was over to create more of the vibrant, artist-designed banners. These editioned banners highlighted the concept of the multiple and heralded a new attitude in America toward the originality of unlimited editions.

By the mid-1960s, Pop artists had become superstars, and many collaborated on an exhibition called "The American Supermarket" held at the Bianchini Gallery in New York from October 6 to November 7, 1964. The exhibition featured everything from chrome cabbages, wax tomatoes, and plaster leaves of pumpernickel bread by Robert Watts; cakes, cookies, and candies by Oldenburg; a 3-D turkey by Tom Wesselmann; and an entire case of handpainted wax "meats." Lichtenstein's image of a turkey and Warhol's Campbell's Soup can image were silkscreened on shopping bags which sold for $2, in what was an "American Pop Art Store."

Upbeat Pop-art objects included in the exhibition were presented within their historical context, and were frequently put to practical use, becoming an integral part of everyday life. People served meals on Lichtenstein's dishes; Oldenburg's cast-plaster cake was "served" to guests at weddings; Warhol's shopping bags, featuring his signature Campbell's soup-can image, were carried about town (not all Pop-art objects could be used, however—take, for example, Robert Watts' etched "dollar bills," which came to be known as "Pop Currency"). These and other inventive products challenged the assumptions that the more rare an art object the greater its quality, and that a significant work had to be produced by the hand of the artist. It was common, in fact, for a Pop artist to conceive an idea for an object, while the multiples themselves were created by an assistant. These Pop-art objects set the stage for the time when artists would design everything from dinnerware to carpets to table lamps.

Although the public tended not to take Pop art seriously, art critics often saw it as a legitimate art form, as well as a form of social commentary on the consumer-driven society of Western nations.

Pop art in Japan is unique and identifiable as Japanese because of the regular subjects and styles. Many Japanese pop artists take inspiration largely from Anime, and sometimes Ukiyo-e and traditional Japanese art. The most well known pop artist currently in Japan is Takashi Murakami, whose group of artists, Kaikai Kiki, is world renowned for their own mass-produced, but highly abstract and unique Superflat art movement. This surrealistic, Post-Modern movement, whose inspiration comes mainly from Anime and Japanese street culture, is mostly aimed at the youth in Japan, and has made a large cultural impact.

Some artists in Japan, like Yoshitomo Nara, are famous for their Graffiti-inspired art, and some, such as Takashi Murakami, are famous for mass-produced plastic or polymer figurines. Many pop artists in Japan use surreal or obscene, shocking images in their art, which is clearly taken from Japanese Hentai. This element of the art catches the eye of viewers, young and old, and is extremely thought provoking, but not taken as offensive in Japan. A common metaphor used in Japanese Pop art is the innocence and vulnerability of children and youth. Artists like Aya Takano and Yoshitomo Nara use children as a subject in almost all of their art. While Yoshitomo Nara creates scenes of anger or rebellion through children, Aya Takano communicates the innocence of children by portraying nude girls.