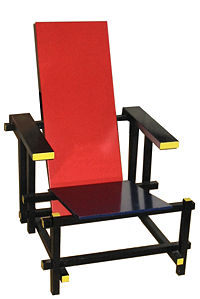 Red and Blue Chair designed by Gerrit Rietveld in 1917.

Proponents of De Stijl sought to express a new utopian ideal of spiritual harmony and order. They advocated pure abstraction and universality by a reduction to the essentials of form and color; they simplified visual compositions to the vertical and horizontal directions, and used only primary colors along with black and white. Indeed, according to the Tate Gallery's online article on neoplasticism, Mondrian himself sets forth these delimitations in his essay Neo-Plasticism in Pictorial Art. He writes, "… this new plastic idea will ignore the particulars of appearance, that is to say, natural form and color. On the contrary, it should find its expression in the abstraction of form and color, that is to say, in the straight line and the clearly defined primary color." The Tate article further summarizes that this art allows "only primary colors and non-colors, only squares and rectangles, only straight and horizontal or vertical line."[3] The Guggenheim Museum's online article on De Stijl summarizes these traits in similar terms: "It [De Stijl] was posited on the fundamental principle of the geometry of the straight line, the square, and the rectangle, combined with a strong asymmetricality; the predominant use of pure primary colors with black and white; and the relationship between positive and negative elements in an arrangement of non-objective forms and lines."[4]

The name De Stijl purportedly derived from Gottfried Semper's Der Stil in den technischen und tektonischen Künsten oder Praktische Ästhetik (1861–3), which Curl[2] suggests was mistakenly believed to advocate Materialism and Functionalism. In general, De Stijl proposed ultimate simplicity and abstraction, both in architecture and painting, by using only straight horizontal and vertical lines and rectangular forms. Furthermore, their formal vocabulary was limited to the primary colors, red, yellow, and blue, and the three primary values, black, white, and gray. The works avoided symmetry and attained aesthetic balance by the use of opposition. This element of the movement embodies the second meaning of stijl: “A post, jamb or support;” this is best exemplified by the construction of crossing joints, most commonly seen in carpentry.

In many of the group's three-dimensional works, vertical and horizontal lines are positioned in layers or planes that do not intersect, thereby allowing each element to exist independently and unobstructed by other elements. This feature can be found in the Rietveld Schröder House and the Red and Blue Chair.

De Stijl movement was influenced by Cubist painting as well as by the mystical ideas about "ideal" geometric forms (such as the "perfect straight line") in the neoplatonic philosophy of mathematician M.H.J. Schoenmaekers. The works of De Stijl would influence the Bauhaus style and the international style of architecture as well as clothing and interior design. However, it did not follow the general guidelines of many of the other “isms” (such as Cubism, Futurism, and Surrealism), nor did it adhere to the principles of art schools like Bauhaus; it was a collective project, a joint enterprise.

In music, De Stijl was an influence only on the work of composer Jakob van Domselaer, a close friend of Mondrian. Between 1913 and 1916, he composed his Proeven van Stijlkunst (Experiments in Artistic Style), inspired mainly by Mondrian's paintings. This minimalistic—and, at the time, revolutionary—music defined "horizontal" and "vertical" musical elements and aimed at balancing those two principles. Van Domselaer was relatively unknown in his lifetime, and did not play a significant role within the De Stijl group. From the flurry of new art movements that followed the Impressionists' revolutionary new perception of painting, Cubism arose in the early twentieth century as an important and influential new direction.

Cubism revolutionized European painting and sculpture. In cubist artworks, objects are broken up, analyzed, and re-assembled in an abstracted form—instead of depicting objects from one viewpoint, the artist depicts the subject from a multitude of viewpoints to present the piece in a greater context. Often the surfaces intersect at seemingly random angles presenting no coherent sense of depth. The background and object (or figure) planes interpenetrate one another.

In the Netherlands, too, there was interest in this new art form. However, because the Netherlands remained neutral in World War I, Dutch artists were not able to leave the country after 191,4 and were, thus, effectively isolated from the international art world—and in particular, from Paris, which was the center of the avant-garde at that time.

During that period, painter Theo van Doesburg started looking for other artists to set up a journal and start an art movement. Van Doesburg was also a writer, poet, and critic, who had been more successful writing about art than working as an independent artist. Quite adept at making new contacts due to his flamboyant personality and outgoing nature, he had many useful connections in the art world.

Around 1915, Van Doesburg started meeting the artists who would eventually become the founders of the journal. He first met Piet Mondrian at an exhibition in the Amsterdam Stedelijk Museum. Mondrian, who had moved to Paris in 1912 (and there, changed his name from "Mondriaan"), had been visiting the Netherlands when the war broke out. He could not return to Paris, and was staying in the artists' community of Laren, where he met Bart van der Leck and regularly saw M.H.J. Schoenmaekers. In 1915, Schoenmaekers published Het nieuwe wereldbeeld (The New Image of the World), followed in 1916 by, Beginselen der beeldende wiskunde (Principles of Plastic Mathematics). These two publications would greatly influence Mondrian and other members of De Stijl.

Van Doesburg also knew J.J.P. Oud and the Hungarian artist Vilmos Huszàr. In 1917, the cooperation of these artists, together with the poet Anthony Kok, resulted in the founding of De Stijl. The young architect Gerrit Rietveld joined the group in 1918.

During those first few years, the group was still relatively homogeneous, although Van der Leck left in 1918 due to artistic differences of opinion. Manifestos were being published, signed by all members. The social and economic circumstances of the time formed an important source of inspiration for their theories, and their ideas about architecture were heavily influenced by Berlage and Frank Lloyd Wright.

Around 1921, the group's character started to change. From the time of van Doesburg's association with Bauhaus, other influences started playing a role. These influences were mainly Kazimir Malevich and Russian Constructivism, but not all members agreed. In 1924, Mondrian broke with the group after van Doesburg proposed the theory of elementarism, proposing that the diagonal line was more vital than the horizontal and the vertical. In addition, the De Stijl group acquired many new "members." Dadaist influences, such as I.K. Bonset's poetry and Aldo Camini's "antiphilosophy," generated controversy as well. Only after van Doesburg's death was it revealed that Bonset and Camini were two of his pseudonyms.

Theo van Doesburg died in Davos in 1931. His wife, Nelly, administered his estate.

Because of van Doesburg's pivotal role within De Stijl, the group did not survive. Individual members remained in contact, but De Stijl could not exist without a strong central character. Thus, it may be wrong to think of De Stijl as a close-knit group of artists. The members knew each other, but most communication took place by letter. For example, Mondrian and Rietveld never met in person.

Many, though not all, artists did stay true to the movement's basic ideas, even after 1931. Rietveld, for instance, continued designing furniture according to De Stijl principles, while Mondrian continued working in the style he had initiated around 1920. Van der Leck, on the other hand, went back to figurative compositions after his departure from the group.

Mondrian was a Dutch painter who came to New York City. Aside from van Doesburg, he was probably the most important contributor to the De Stijl art movement and group.

Despite being well-known, often-parodied and even trivialized, Mondrian's paintings exhibit a complexity that belies their apparent simplicity. He is best known for his non-representational paintings that he called compositions, consisting of rectangular forms of red, yellow, blue or black, separated by thick, black rectilinear lines. They are the result of a stylistic evolution that occurred over the course of nearly 30 years and continued beyond that point to the end of his life. 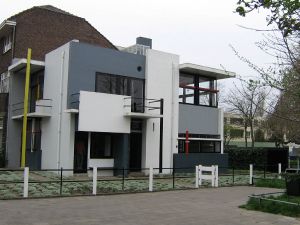 The Rietveld Schröder House—the only building realized completely according to the principles of De Stijl.

The De Stijl influence on architecture remained considerable long after 1931; Mies van der Rohe was among the most important proponents of its ideas. Between 1923 and 1924, Rietveld designed the Rietveld Schröder House, the only building to have been created completely according to De Stijl principles. Examples of Stijl-influenced works by J.J.P. Oud can be found in Rotterdam (Café De Unie) and Hoek van Holland.

Works of De Stijl members are scattered all over the world, but De Stijl-themed exhibitions are organized regularly. Museums with large De Stijl collections include the Gemeentemuseum at The Hague (which owns the world's most extensive, although not exclusively De Stijl-related, Mondrian collection) and the Amsterdam Stedelijk Museum, where many works by Rietveld and Van Doesburg are on display. The Centraal Museum of Utrecht has the largest Rietveld collection worldwide; it also owns the Rietveld Schröder House, Rietveld's adjacent "show house," and the Rietveld Schröder Archives.

This list is not exhaustive. Because of the loose associations many artists had with De Stijl, it is difficult to get a complete overview of contributors.