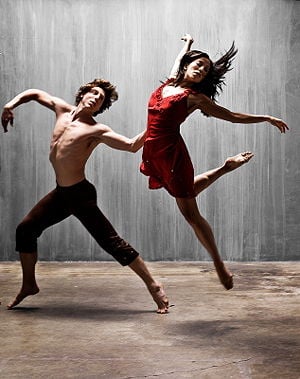 A man and a woman performing a modern dance

Modern dance is a dance form that developed in the early twentieth century, partly in reaction to the traditional, more highly technical forms of dance such as ballet. Modern dance in America was pioneered by Ruth St. Denis and Martha Graham during the 1920s, 1930s, and 1940s and rose to prominence in the 1950, 1960s, and 1970s with outstanding choreographers such as Alvin Ailey and Bob Fosse.

The early modern dance pioneers of the 1920s through the 1940s broke boundaries by not only creating new ways of movement and examining new themes, but by changing the way people thought about dance. But with the onset of growing developments in fields of psychology and sociology in the 1960s, and with exploding trends in both music and art evolving, dance followed suit. Widespread attitudes of rebellion and change influenced a new generation of choreographers who became known as the postmodern generation. Postmodern dance experimented in ways that had more in common with the dada movement in art than the architectural or literary movements of postmodernism.

While some argued that postmodern dancers had lost much of what was valuable to dance, others felt that the 1960s broadened the scope of possibility for dance, and that the rejection of form and content was necessary to strip dance of built up pretension.

Contemporary dancers are taking modern dance to yet another level by actively blending dance forms from all over the world. Using ballet, tap, modern, jazz, and world dance forms to create fusion dances it is proving to be a means of helping transcend boundaries of nationality, gender, and race, and offering a more unifying aspect to the artistic expression of social conscience that was so predominant during 1960s.

Today the term "modern dance" is included in the broader category of twentieth century concert dance which encompasses all dance forms from expressionist to improvisation to dance theater.

Commenting on a conversation he had with founding director of New York City Ballet, George Balanchine, Jacques D'Ambroise, founder of the National Dance Institute, said, "…we evolved the following description (of modern dance): 'Dance is an expression of time and space, using the control of movement and gesture to communicate.'"[1]

The term modern dance is usually typified by the theatrical dance which rose to prominence during the middle of the twentieth century, and was often highlighted in both Hollywood screen and Broadway stage productions. While strongly influenced by classical ballet, the movement of modern dance is more fluid and contains dynamic highlights and tricks of jazz dance, including isolations, kicks, and leaps; alternately, many movements are weighted and close to the earth.

Did you know?
Modern dance developed in the twentieth century as a rebellion not only against the constraints of classical ballet but as a way to express contemporary social concerns

The choreography of modern dance is very diverse and generally cannot be categorized as any specific dance style, although many dance styles influence much of the movement. Modern Dance in the twentieth century not only broke free of the constraints of traditional dance forms but provided important social commentary to the upheaval and turmoil of the century's greatest changes.

In the early 1900s a few dancers in Europe started to rebel against the rigid constraints of Classical Ballet. Shedding classical ballet technique, costume, and shoes these early modern dance pioneers practiced free dance. Although the term modern dance was not yet coined, these early precursors contributed, through their independence and originality, to dance as a rising art form whose prestige would be firmly established in America by the 1940s. 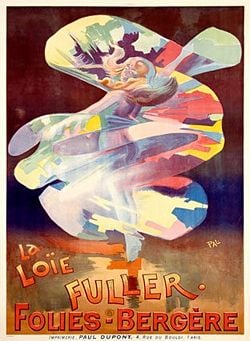 Poster for Loïe Fuller at the Folies Bergère

At the turn of the century, in America, Loie Fuller, was captivating audiences with her burlesque "skirt" dancing. Fuller developed a form of natural movement and improvisation techniques that were used in conjunction with her revolutionary lighting equipment and translucent silk costumes. She patented her apparatus, her methods of stage lighting, and her voluminous silk costumes.

Although Ballroom dance was popular in the early part of the twentieth century, there was no professional dance company, per se, in America. Fuller brought her solo act to the Paris Exposition in 1900, where she was watched by both Isadora Duncan and Ruth St. Denis—two other American dancers who would develop their own highly personal style of free dance, laying the foundation for American modern dance with their choreography and teaching.

Isadora Duncan developed a dance technique influenced by the philosophy of Friedrich Nietzsche and a belief that the dance of the ancient Greeks (natural and free) was "the dance of the future." Ruth St. Denis, influenced by the actress Sarah Bernhardt and the Japanese dancer Sado Yacco, developed her own interpretations, or "translations" of Indian culture and mythology. Her performances quickly became popular and she toured extensively while researching East Asian culture and arts. Both dancers held personal expression primary over technique and sought to use natural movements; sometimes Duncan danced with a simple backdrop and no musical accompaniment. The hallmark of their dance style was innovation and experimentation.

Fuller, Duncan, and St. Denis all toured Europe seeking a wider and more accepting audience for their work. Only Ruth St. Denis returned to the United States to continue her work. Isadora Duncan died in Paris, in 1927, and Fuller's work received the most recognition in France, where she became a fixture at the celebrated Folies Bergère[2]

In 1915, Ruth St. Denis founded, along with her husband and dance partner, Ted Shawn, the Denishawn School. More than just a dance school, the troupe toured the vaudeville circuit, provided dancers for D.W. Griffith's burgeoning Hollywood movie industry, and pioneered dance as an art form that could engage an American audience. Not only were male dancers now included in the dance repertoire, but three Denishawn pupils would become important pioneers of modern dance in their own right. They were: Martha Graham, Doris Humphrey, and Charles Weidman.[3] Graham's 1926 solo performance established modern dance as something completely unique. Meanwhile, Humphrey and Weidman, along with 16 other dancers, made American dance history with the first performance by a modern dance ensemble in 1928.[4] Dance, as an art form, was on its way towards becoming an acceptable part of the vernacular of American entertainment.

In 1929, the three pioneers, Graham, Humphrey, and Weidman (along with Helen Tamiris) formed the Dance Repertory Theatre, in New York City, the first of its kind, in order to pool resources, and find a way to survive financially while continuing to thrive and experiment artistically.[5] The Dance Repertory Theatre proved to be short-lived; however, dance was soon to take hold at the grass roots level.

The major supporter, on the East Coast, was Bennington College of Vermont, spurred on by an educator and ardent supporter of the arts named Martha Hill. Nearby, Ted Shawn, who had separated from Ruth St. Denis, formed the dance troupe and school Jacob's Pillow, at his New York farm. Jacob's Pillow, now located in Massachusetts, host what is billed as "America's longest running dance festival" each summer. Martha Graham, before starting her own groundbreaking school, became a teacher at Bennington College along with Humphrey, Weidman, and German immigrant Hanya Holm, whose expressionistic style of dance was expelled by the Nazi regime at the onset of World War II.[5]

Consequently, modern dance survived the Great Depression and an uncertain start due to its new patronage. By the 1940s, it was becoming an established art form that was no longer merely regarded as an avant-garde aberration.[5]

The founders of modern dance, with Graham clearly the leader, continued to create works based on ancient myths and legends, following a narrative structure. Many of their students, however, began to see dance as a potential agent for change. Disturbed by the rising threat of fascism in Europe, they tried to raise consciousness by dramatizing the economic, social, ethnic, and political crises of their time.

A list of post-modern dance reformers and their accomplishments is as follows:

The social upheaval and activism of the 1960s spurred artists further to challenge new heights of modern dance technique. They tested the already established modern dance limits established by its forerunners, while celebrating and revealing the experience of black America.[6] Leaders in the field of African-American modern dance became cultural pioneers who reacted against social bigotry and segregation through their art. The list includes: 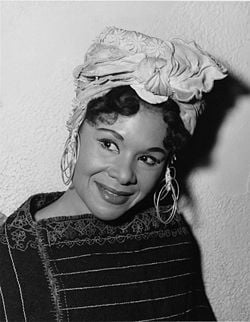 The person perhaps most credited with the fusion of modern dance and ballet was Twyla Tharpe a student of the Judson Dance Theater. During the 1970s, Tharpe choreographed work for Mikhail Baryshnikov, at the American Ballet Theatre and for the Joffrey Ballet Company. She blended jazz, ballet, tap, and modern into one movement that threaded all forms seamlessly as one entity.[7] What the original pioneers of modern dance were reacting against—the constraints of ballet—had now come full circle in the 1970s, as new cultural heroes, like defector ballet dancer Rudolf Nereyev, were challenging the Cold War status of the former Soviet Union.[7] Working with Tharpe and other choreographers they created a "dance explosion" that riveted American audiences with new experiments in dance.

As the field of modern dance has developed and other dance genres have become more defined, the term, modern dance, has become almost obsolete. Where it once fought for recognition it is now expressed, adapted, and displayed through many genres of dance including jazz, classical, and contemporary. Contemporary dance draws on both modern and postmodern dance as a source of inspiration and combines steps from ballet, jazz, and tap.