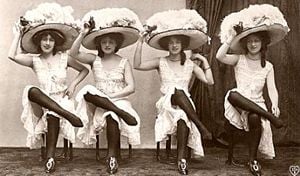 Burlesque is a form of theatrical entertainment featuring parodic humor, usually consisting of comic skits and sometimes a chorus line or striptease. The name burlesque is derived from the literary tradition of the same name, characterized by comic imitation of a serious artistic form.

Burlesque originated in nineteenth-century music hall entertainments and vaudeville. In the early twentieth century it emerged as a popular blend of satire, performance art, and adult entertainment.

In burlesque, performers often create elaborate sets with lush, colorful costumes, mood-appropriate music, and dramatic lighting. It may also include novelty acts, such as fire-breathing or demonstrations of unusual flexibility, to enhance the impact of performances. Like its cousin, commedia dell'arte, burlesque turns social norms head over heels. The genre traditionally encompasses a variety of acts such as dancing girls, chanson singers, stand-up comics, mime artists, and strip tease, all satirical and with a saucy edge.

Many mainstream comedy performers got their starts in burlesque. In the late 1920s, the sleazy aspect of the genre became more prominent, as comedy audiences left the burlesque halls for the movie theaters. The strip tease element of burlesque became subject to extensive local legislation, leading to a carefully limited theatrical form that titillated without falling foul of censors. 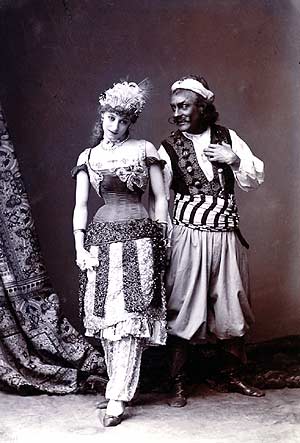 The burlesque genre originated in the 1840s, early in the Victorian Era, a time of culture clashes between the social rules of established aristocracy and a working-class society. Possibly due to historical social tensions between the upper classes and lower classes of society, much of the humor and entertainment of burlesque focused on lowbrow and ribald subjects. In its later heyday, however, burlesque bore little resemblance to earlier literary "burlesques" which parodied widely known works of literature, theater, or music.

Early burlesque featured shows that emphasized comic sketches, often lampooning the social attitudes of the upper classes, alternating with dance routines. It developed alongside vaudeville in the late nineteenth century, running on competing circuits. Indeed, many vaudeville acts were indistinguishable from burlesque.

The popular burlesque show of the 1870s through the 1920s was a raucous, bawdy style of variety theater. It was inspired by Lydia Thompson and her troupe, the British Blondes, who first appeared in the United States in the 1860s, and also by early "leg" shows such as The Black Crook (1866). The form, humor, and aesthetic traditions of American burlesque were partly derived from the minstrel show. Another well known early burlesque troupe was the Rentz-Santley Novelty and Burlesque Company, created in 1870 by M.B. Leavitt, who had earlier feminized the minstrel show with her group Madame Rentz's Female Minstrels. 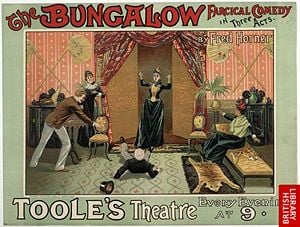 British poster from the 1890s advertises a "farcical comedy."

The U.S. burlesque tradition rapidly adapted the minstrel show's structure: part one was composed of songs and dances rendered by a female company, interspersed with low comedy from male comedians. Part two was a potpourri of short specialty acts in which the women did not appear. The show would end with grand finale in which the entire company would perform.

The genre often mocked established entertainment forms such as opera, Shakespearean drama, musicals, and ballet. The costuming (or lack thereof) increasingly focused on forms of dress considered inappropriate for polite society. By the 1880s, the burlesque had evolved some informal rules for defining itself:

During the golden age of burlesque (1900-1930), some 200 burlesque theaters opened across America. By 1905, theater owners established vaudeville-style circuits of small, medium, and big time theater referred to as “wheels,” the largest being the Columbia (Eastern U.S.), Mutual, and Empire (Western U.S.) wheels. Burlesque performers spent a full 40-week season touring as part of one troupe. This system lasted for three decades, making burlesque a dependable source of work and creating major stars in the first part of the twentieth century. One such burlesque star was Millie DeLeon, whose act foreshadowed the strip shows that were to follow. A comely brunette, DeLeon would throw her garters into the audience and sometimes forgo wearing tights.

Burlesque shows often started and concluded with extended skits called “burlettas” that ridiculed hit shows and popular topics. In the middle of the bill was a varied mix of singers, comics, jugglers, magicians, and specialty acts. Burlesque provided much-needed experience for amateurs, who, if they had the talent and drive, could ascend to vaudeville as polished pros. In addition, vaudeville performers, who could only be hired by the week, sometimes played the burlesque circuit for additional pay under an assumed name.

Above all, it was comedy that was burlesque’s rich legacy. Some of the future greats who plied their comedic crafts in the burlesque wheels were Jackie Gleason, Fanny Brice, Leon Errol, Bert Lahr, W. C. Fields, Milton Berle, Red Skelton, Phil Silvers, Molly Picon, and Bob Hope. Burlesque routines contained a lead comic—the “top banana”—and his sidekicks were known as the second, third, etc. If a performer was near the bottom of the "bunch," he could expect particularly abusive on-stage treatment, with a pie in the face or a dousing with water not being uncommon. Perhaps the most famous burlesque routine was Bud Abbott and Lou Costello's iconic "Who's On First," which spoofed social conventions by continually misunderstanding baseball players’ names.

The strippers take over 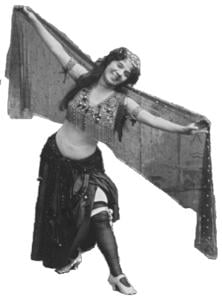 One of two dancers known as "Little Egypt". 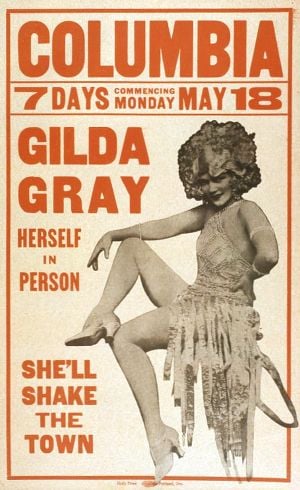 Gilda Gray popularized the suggestive dance known as the "shimmy".

As movies came to the fore and the old burlesque circuits closed down in the 1920s, desperate theater owners sought to offer fare that the other entertainment outlets could not. Drawing on the striptease tradition that began with Little Egypt’s dance—the "hootchie-kooch"—at the 1893 Chicago World's Fair, key burlesque promoters like the Minsky Brothers featured tawdry displays on the burlesque stage. During the Great Depression, hordes of love-starved men kept the burlesque houses alive and profitable. However, the strippers had to exercise restraint, or risk ending up in jail for corrupting public morals.

Some strippers demonstrated an artistic twist, elevating them to greater stardom, including the exotic fan dancer, Sally Rand, and former vaudevillian Rose Louise Hovick, who had the stage name Gypsy Rose Lee and got laughs by pretending to be an intellectual.

The popular strippers soon became the main fare of burlesque, avoiding arrest by covering their groins with flimsy G-strings and their nipples with “pasties.” By the mid-1920, burlesque managers depended on the legal loopholes of their lawyers to keep their establishments open. By the end of burlesque’s golden age, animated ribald humor had been replaced by bump-and-grind strip routines, interspersed with dry, lifeless comedic bits. The end of burlesque and the birth of striptease was later dramatized in the entertaining film The Night They Raided Minsky's.

According to entertainment historian Robert G. Allen: "Burlesque's principal legacy as a cultural form was its establishment of patterns of gender representation that forever changed the role of the woman on the American stage and later influenced her role on the screen." (Allen 1991)

The first motion-picture adaptation of an actual burlesque show was Hollywood Revels (1946), a theatrical feature film starring exotic dancer Allene. Much of the action was filmed in medium or long shots, because the production was staged in an actual theater and the camera photographed the stage from a distance. 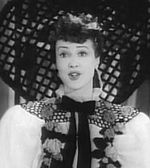 In 1947, enterprising film producer W. Merle Connell reinvented the filmed burlesque show by restaging the action especially for movies, in a studio. The camerawork and lighting were better, the sound was better, and the new setup allowed for close-ups and a variety of photographic and editorial techniques. His 1951 production French Follies is a faithful depiction of a burlesque presentation, with stage curtains, singing emcee, dances by showgirls and strippers, frequent sketches with straightmen and comedians, and a finale featuring the star performer. The highlight is the famous burlesque routine "Crazy House," popularized earlier by Abbott and Costello. Another familiar chestnut, "Slowly I Turned" (famous today as a Three Stooges routine), was filmed for Connell's 1953 feature A Night in Hollywood.

These movies, as their titles imply, were only teasing the viewer: the girls wore revealing costumes but there was never any nudity. In the late 1950s, however, other producers made more provocative films, sometimes using a "nudist colony" format, and the relatively tame burlesque-show movie died out.

As early as 1954 burlesque was already considered a bygone form of entertainment; burlesque veteran Phil Silvers laments the passing of burlesque in the movie musical Top Banana. 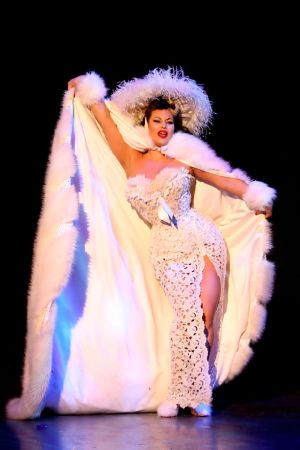 A new generation nostalgic for the spectacle and perceived glamour of the old times, and sensing the possibility of financial gain through the legitimatization of "adult" entertainment, determined to bring burlesque back. This revival was pioneered independently in the mid-1990s by Billie Madley's "Cinema" and Ami Goodheart’s “Dutch Weismanns’ Follies” revues in New York, and Michelle Carr’s “The Velvet Hammer Burlesque” troupe in Los Angeles. In addition, and throughout the country, many individual performers were incorporating aspects of burlesque in their acts. These productions, inspired by the likes of Sally Rand, Tempest Storm, Gypsy Rose Lee and Lili St. Cyr have themselves gone on to inspire a new generation of performers.

Today, "New Burlesque" has taken many forms, but all have the common trait of honoring one or more of burlesque’s previous incarnations, with acts including striptease, expensive costumes, bawdy humor, cabaret, and more. There are modern burlesque performers and shows all over the world, and annual conventions such as the Vancouver International Burlesque Festival and the Miss Exotic World Pageant are held.