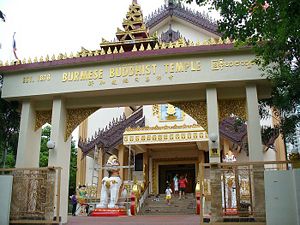 The founding missionary of the Burmese Buddhist Temple in Singapore, U Kyaw Gaung, supervised the project of commissioning the creation of a gigantic white marble Buddha statuein Myanmar. The result is a superb artistic treasure housed in the current Burmese temple. The contribution he made to Buddhism and Buddhist art in Singapore is exceptional. On the new site stands a treasured Bodhi tree. Legend states that the tree grew from a seed that, through the parent tree, connects directly with the Bodhi tree under which Buddha attained Enlightenment. The Bodhi tree has attained the stature of a relic through direct ties with the Buddha. The current spiritual head of the Burmese Buddhist Temple in Singapore, Sayadaw U Pannya Vamsa, has been a successful missionary for the Theravada Buddhists.

U Thar Hnin (Tang Sooay Chin), a Burmese, founded the Burmese Buddhist Temple (BBT) at 17 Kinta Road (off Serangoon Road) in 1875. In 1878, U Thar Hnin, a Burmese traditional physician, donated the temple to U Kyaw Gaung. The temple houses the largest pure white marble statue of the Buddha outside of Myanmar. The temple constitutes the first and only Burmese Buddhist worship place built outside of Myanmar in the traditional Burmese architectural style.[2]

U Kyaw Gaung (also known as Khoo Teogou) had been born in Mandalay, Myanmar in 1866. He arrived in Singapore at an early age, his wife, Daw Khin Mae and their three children joined him later. Coming from a land of great Buddhist influence, U Kyaw Gaung aimed to introduce Theravada Buddhism in Singapore.[3]

In 1907, the directors elected him trustee of the temple. While administrating for the temple, he had planned to acquired a sizable marble Buddha statue as seen in Myanmar. Handicapped by limited funds raised from public donations and his private funds, U Kyaw Gaung concentrated on raising the funds necessary to purchase the statue. During his several trips to Myanmar, he found an immense marble weighing more than ten tons from Sagyin Hill, 50 km north of Mandalay. In Myanmar, Sagyin Hill had won fame for its superior quality marble. Gaung purchased the stone for Rs1, 200, ordering it delivered to Mandalay, a city reputed for its skilled craftsmanship. In 1918, a magnificent Buddha image measuring three meters (eleven feet) in height had been sculptured out from the stone into a master piece.[3]

Despite the lack of modern transportation and heavy machinery, and facing numerous challenges during the arduous 2,500 km land and sea journey, U Kyaw Gaung successfully had the Buddha statue transported to Singapore in 1921 intact. He benefited from the assistance from Aw Boon Par, of Tiger Balm fame.[4] The marble statue, first housed in Buddha Wehara temple, removed to Kinta Road in 1925 to take a place in a dedicated chamber. That chamber became a shrine hall where devotees paid homage to the Buddha. In 1935, when U Kyaw Gaung died at the age of 69, monks converted a portion of the temple into a private residence. U Kyaw Gaung's children looked after the temple during the Japanese Occupation of Singapore and in the post-war period.[3]

In 1981, the Urban Redevelopment Authority served notice to the family of U Kyaw Gaung to vacate their house. The government relocated temple on Tai Gin Road in 1988 where it stands today. Sayadaw U Pannya Vamsa, the temple's spiritual leader, officially reopened the temple in 1991 in a celebration including monks, members of the public and well-wishers. The temple has intricate Burmese architectural style with teak wood carvings donated by the Tripitaka Nikaya Main Ministrative Body (Ti Ni) of Myanmar.[5] The new temple houses a spacious shrine hall, a meditation hall, a multi-purpose hall, a library and living quarters for the monks.

A Bodhi tree (Ficus religiosa), grown from a seed from its parent tree situated at Mangala Vihara Buddhist Temple at 30 Jalan Eunos, Singapore, stands in the temple compound. A Buddha image sits under the Bodhi tree to remind people that attained Enlightenment while meditating under a Bo tree at Bodh Gaya, in the Ganges valley, circa 600 B.C.E. Madam Boey, a devotee of Mangala Vihara, nurtured the Bodhi tree. Its parent tree had been a sapling brought from Sri Lanka. Legend states the the Sri Lanka Bodhi tree had been brought by Venerable Mahinda, the son of King Asoka from India. It had been a descendant of the Bodhi tree under which Buddha attained Enlightenment.[6]

The current spiritual leader, the Venerable Sayadaw U Pannya Vamsa, had been born at Wakema, Myanmar on January 10, 1928. Ordained as a novice at the age of fourteen, he received higher ordination as Bhikkhu on April 16, 1948. He studied Pali and Buddhism in Wakema, Yandoon and Mandalay, in 1953 passing Dhammacariya, the highest examination in Pali, with distinction. The government of Myanmar awarded him the degree of Sasanadaja Siripavara Dhammacariya,[7] ("Blessed Noble Dharmafarer, Banner of the Teaching").[8]

In 1954, the government of Myanmar selected him for missionary work in Cocos Island, subsequently extending his work to Sri Lanka, Andaman Islands and Malaysia. In Malaysia, from 1970 to 1979, he served as a religious adviser to the Young Buddhist Association of Malaysia and as chief examiner of the Malaysia Buddhist examination syndicate. He founded the Sunday Buddhist Institute, an organization for the study of Buddhism and meditation. In 1979, he became a lecturer in Buddha Abhidhamma at the University of Oriental Studies, Los Angeles.[7]

Vamsa directed the building of eight Burmese Buddhist monasteries in cities worldwide including Los Angeles, Sydney, Chicago, Toronto, Singapore, Kuala Lumpur, Rangoon and Auckland between 1979 to 2002. He has written nine books in English, including Maha Paritta Pali Sacred Verses, The Dawn of Buddhism and The Ten Perfections.[7] In recognition for his work, the Myanmar government conferred on him the titles of Agga Maha Pandita ("Foremost Great Wise One")[9] and Agga Maha Saddhamma Jotika ("Foremost Great Light of the Sublime Dharma")[9] in 1994 and 1998 respectively.[7] At 80 years old as of this writing, Sayadaw currently resides at the Dhammikayama Burmese Buddhist Temple in Penang, Malaysia.

Although originally situated elsewhere, the temple's current location has a history of Burmese people living in the area. Many of the streets connecting Balestier Road have been named after cities and places in Myanmar such as:[10]

Since the relocation of the temple, the area has once again attracted many to the Burmese community in the area, either as residents in the area or simple gathering at the temple on festive days.

Retrieved from https://www.newworldencyclopedia.org/p/index.php?title=Burmese_Buddhist_Temple&oldid=1095120
Categories:
Hidden category:
This page was last edited on 12 January 2023, at 02:11.
Content is available under Creative Commons Attribution/Share-Alike License; additional terms may apply. See Terms of Use for details.