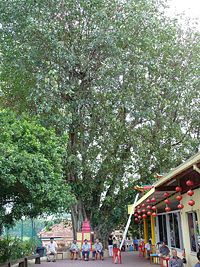 The ancient Bodhi tree, over 30 meters tall, continues to provide shade and tranquility to the devotees of Jin Long Si Temple.

Although Jin Long Si Temple respects and regards Taoism and Confucianism, Buddhism's predominance has been indicated by the concern for the preservation of a Bodhi tree on the current property slated for eviction to build a subway station. The Bodhi tree, a symbol of Buddha's enlightenment, has entwined its roots into the foundation of the temple. The temple can not be destroyed without killing the priceless Bodhi tree. The Jin Long Si Temple Bodhi tree, grown from seeds brought from Sri Lanka, has stood on the spot for 120 years. The three religion temple allows us to envision a time in which religions harmonize, collaborate for the good of all, and avoid sectarianism.

Jin Long Si Temple, originally known as Jin Long Miao, constituted under a trust, had been established as a religious and charity mission in 1941, with funds and donations from philanthropic Chinese merchants. Founded to provide public shelter and a place of worship for the Chinese community during the period of great uncertainty of an imminent war sweeping through South East Asia in the 1940s,[1] the temple started off as an attap hut on a land donated by a grateful devotee earlier. 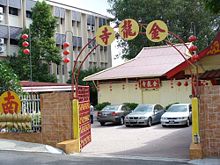 The Jin Long Si Temple at Lorong How Sun, Singapore.

Wan Guan Lin later rebuilt it into a zinc-roof and wooden structure, remaining almost unchanged ever since. Displaying much resourcefulness and artistic talent, the devotees constructed a huge statue of the Laughing Buddha out of saw dust, a pagoda and also a pavilion with the life-size figure of their patron deity, Nan Wu Wu Ji Sheng Mu.[1] While the temple takes the direction of a Chinese Mahayana Buddhist temple, its teachings represent a fusion of the "san-jiao" (three religion) derived mainly from Buddhism, Taoism and Confucianism. The temple also has many unique Taoist deities like Nan Wu Wu Ji Sheng Mu and Pan Gu (盘古), demonstrating a high level of religious tolerance and acceptance by the temple's community since its early days.[1] Every Sunday afternoon the taped teachings of the temple's late master play, especially to the elderly devotees in Hokkien dialect.

Occupying an area of 1,840 square meters, the temple has approximately 4,000 regular worshipers and more than 300 registered members. It provides free vegetarian meals each day to more than 100 aged and impoverished devotees residing near the temple.[1] The temple has also been active in contributing to the grassroots organizations in Braddell Heights with funds and manpower despite modest resources. The Straits Times featured a notable example in that the temple regularly sponsors functions for its next door neighbor, the Ramakrishna Mission Home for orphans and wayward boys. To reciprocate their kindness, the home opened its gates for the devotees to take a short cut through its premises for those walking uphill to the temple.[2] 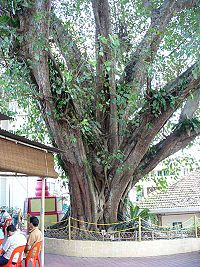 A close-up look of the Bodhi tree at Jin Long Si. The Bodhi tree shares a symbiotic relationship with the temple as its roots deeply intertwine with the building's foundation.

The Bodhi tree at Jin Long Si Temple numbered among the twelve seeds brought by monks from Sri Lanka in the nineteenth century. Approximately 120 years (as of 2008), the tree stands over thirty meters tall and has a girth of 8.5 meters. Verifications made by the Nature Society Singapore (NSS) and National Parks Board (Nparks) declare it the oldest and largest Bodhi tree in Singapore.Cite error: Closing </ref> missing for <ref> tag

On January 20, 2003, the Urban Redevelopment Authority (URA) issued a compulsory land acquisition order to acquire the plot of land belonging to the temple as part of URA's redevelopment plan for a nearby Mass Rapid Transit (MRT) construction of the Circle Line Project (Phase III). The new rail-line stretches from Bartley Road to Marymount Road, and will have five stations along its 5.7 kilometers stretch. Planned in five stages, construction has started for the first two phases of the Circle Line, and the construction on the third phase, costing US$1.2 billion, (US$800 million) will take five years to complete.[3] As a result, both the temple and the Bodhi tree will have to make way for redevelopment in early 2008. The URA has moved to acquire the temple grounds to join with state land next to them so more homes can be built there. It said: "Given Singapore's limited land area, there is a need for a continuous effort to optimize the use of our land, especially at sites served by major public transport infrastructure such as the Circle Line and other MRT stations."

The temple has been offered an alternative site in Punggol, as well as compensation, but its management still hopes to stay. Since then, the temple has actively organized events to generate public awareness and support of its plight as well and has made repeated appeals to the relevant authorities to review their decision to acquire the temple, urging them to preserve the rare and ancient Bodhi tree found within its compound. As a result, considerable public and media interest has been generated in the fate of the temple and its Bodhi tree, as well as other gradually disappearing natural heritage landmarks. Bus loads of local visitors, as well as tourists from countries like Japan, Thailand and China, flock to the temple every weekend. Some visitors have set up blogs and started an online petition to save the temple and the Bodhi tree.[4]

The online petition mentioned how the Land Transport Authority spent US$200,000 in 2005 and changed the alignment of a stretch of Braddell Road to protect an 80-year-old angsana tree. It appealed to the authorities to show the same attitude to the Bodhi tree at Jin Long Si. A concerned reader wrote to the Straits Times Forum Page twice to highlight the issue:[5]

Being an environmentally friendly country, I think our Government should do its part to try to save this only one 100-year-old bodhi tree located at Jin Long Si Temple. Years of cutting down big and small trees for development have caused the temperature in our garden country to increase each year. A few years back, a contractor accidentally chopped down a big tree at Changi. Although the contractor or company was penalised, the damage had been done. Do we wait another 100 years to see such a rare tree in Singapore?[6]

Since 2003, the temple's management has continually received negative replies. The most recent joint reply by the Ministry of Law and the Ministry of National Development, dated March 23, 2006, states the National Parks Board and the Urban Redevelopment Authority will "assess and consider the merit" of keeping the tree but the temple may have to go.[7]

In January 2008, three devotees filed a legal suit to save the temple site from government acquisition, alleging a violation of the Constitution. The High Court dismissed the case on February 25, 2008, on the grounds that "the devotees had no standing to make the application".[8]

The temple received two months to relocate to a temporary site, and subsequently to a permanent home in Tai Seng Avenue. The temple's land will merge with state land next to it, for sale in the second half of 2008. The Government finally confirmed that the Bodhi tree will be retained by imposing for its preservation as part of the tender conditions for the redevelopment of the site.[8]

Retrieved from https://www.newworldencyclopedia.org/p/index.php?title=Jin_Long_Si_Temple&oldid=1074890
Categories:
Hidden category:
This page was last edited on 1 August 2022, at 13:23.
Content is available under Creative Commons Attribution/Share-Alike License; additional terms may apply. See Terms of Use for details.