Casablanca (Spanish for "whitehouse"; Amazigh: Anfa; Standard Arabic: الدار البيضاء; Moroccan Arabic: dar beïda) is a city in western Morocco, located on the Atlantic Ocean. Casablanca is Morocco's largest city as well as its chief port. It is also the largest city in the Maghreb and the sixth largest city on the African continent. It is often and justifiably referred to as the economic capital, although Morocco's political capital is Rabat. The Port of Casablanca is its nation's chief port, the largest of the Maghreb and North Africa, and is one of the largest artificial ports in the world.

Its location on the coast of Morocco has rendered it an important port-city since its inception. During the Second World War, the city served as a desperate "whistle stop" on the underground railway to Lisbon for those seeking escape from the Nazism which was spreading across Europe.

Casablanca is home to the grand Hassan II Mosque, the second largest mosque in the world (after the Masjid al-Haram in Mecca). It is situated on a promontory looking out to the Atlantic, which can be seen through a gigantic glass floor with room for 25,000 worshipers. A further 80,000 can be accommodated in the mosque's courtyard.

The city was made famous in the 1942 film, "Casablanca," which starred Humphrey Bogart and Ingrid Bergman. A story of the conflict between love and virtue, the film has grown in popularity as the years have passed. The movie's characters, quotes, and music have become iconic. It now consistently ranks near the top of lists of the greatest films of all time, and has made Casablanca a household word.

The area which is today Casablanca was settled by seminomadic Berbers by at least the seventh century.[1] A small independent kingdom arose in the area then named Anfa in response to Arab Muslim rule, and continued until it was conquered by the Almoravid Dynasty in 1068.

During the fourteenth century, while under the Merinids, Anfa rose in importance as a port. In the early fifteenth century, the town became an independent state once again, and emerged as a safe harbor for pirates and privateers, leading to it being targeted by the Portuguese, who destroyed the town in 1468.

The Portuguese used the ruins of Anfa to build a military fortress in 1515. The town that grew up around it was called "Casabranca," meaning "White House" in Portuguese. Between 1580 and 1640, the city was under Spanish rule, to be later transferred back to Portugal, who eventually abandoned the area completely in 1755 following near complete destruction by an earthquake.

The town was finally reconstructed by sultan Mohammed ben Abdallah (1756-1790), the grandson of Moulay Ismail and ally of George Washington. The town was called Dar el Beida (white house) in Arabic and Casa Blanca in Spanish.

In the nineteenth century, the area's population grew as Casablanca became a major supplier of wool to the booming textile industry in Britain and shipping traffic increased (the British, in return, began importing Morocco's now famous national drink, gunpowder tea). By the 1860s, there were around 5000 residents, with the population increasing to approximately 10,000 by the late 1880s.[2] Casablanca remained a modestly-sized port, with a population reaching around 12,000 within a few years of the French conquest and arrival of French colonialists in the town, at first administrators within a sovereign sultanate, in 1906. By 1921, this was to rise to 110,000,[2] largely through the development of bidonvilles. 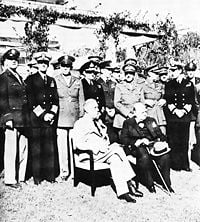 In June 1907, the French attempted to build a light railway near the port, passing through a graveyard. Residents attacked the French workers, and riots ensued. French troops were landed in order to restore order, which was achieved only after severe damage to the town. The French then took control of Casablanca. This effectively began the process of colonialization, although French control of Casablanca was not formalized until 1910. During the 1940s and 1950s, Casablanca was a major center of anti-French rioting.

Casablanca was an important strategic port during World War II and the site of a large American air base, which was the staging area for all American aircraft for the European Theater of Operations.

The city hosted the important Casablanca Conference[3]- considered by some to be the turning point of the war - in January 1943 in which Churchill and Roosevelt met to analyze the progress and discuss further strategy of the war. Soviet leader Joseph Stalin had been invited to attend, but declined. General Charles de Gaulle had initially refused to come but changed his mind when Churchill threatened to recognize Henri Giraud as head of the Free French Forces in his place. Giraud was also present at Casablanca, which reportedly caused notable tension.

The Conference produced the "Casablanca Declaration," which called for the Allies to seek the unconditional surrender of the Axis Powers. It also called for Allied aid to the Soviet Union in the invasion of Sicily and Italy, and the recognition of joint leadership of the Free French by Charles de Gaulle and Giraud.

Morocco gained independence from France on March 2, 1956. Since that time Casablanca has become the economic and business capital of the nation, while Rabat is the political capital.

In March 2000, women's groups organized demonstrations in Casablanca proposing reforms to the legal status of women in the country. Forty thousand women attended, calling for a ban on polygamy and the introduction of divorce law (divorce being a purely religious procedure at that time). Although the counter-demonstration attracted half a million participants, the movement for change begun then was influential on King Mohammed VI, who enacted a new Mudawana, or family law, in early 2004, meeting some of the demands of women's rights activists.

On May 16, 2003, 45 civilians were killed and more than 100 people were injured when Casablanca was hit by a multiple suicide bomb attack carried out by local Moroccans and claimed by some to have been linked to al-Qaeda. Several of those convicted for their roles in the bombings escaped by tunneling out of their prison.[4] 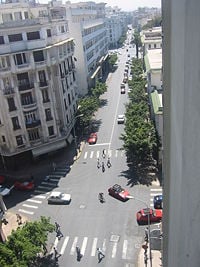 A view on the Boulevard de Paris in central Casablanca

The 1956 Moroccon independence brought several years of economic hardship for Casablanca, but the city soon revived through its focus on industry and commerce.

The Port of Casablanca refers to the collective facilities and terminals that conduct maritime trade functions in the city's harbors, and which handle Casablanca's shipping. The man-made port is protected from the sea by a breakwater. Not only does it handle the majority of Morocco's foreign trade, it is also a port of call for European ships. The boulevard leading to the port is lined with tourist shops. One of the largest artificial ports in the world. [5], it is also the largest port within the Maghreb and North Africa.

Casablanca's port treats a traffic of more than 21,3 million tons per annum, 38 percent of the national traffic, and carries out a sales turnover of more than 894 Million Moroccan Dirhams. With an extent of 605 hectares and extending to more than 8 kilometers in length. It can accommodate and treat more than 35 ships at once.

The port is located near Hassan II Mosque.

Approximately 12 percent of Morocco's population lives in the greater Casablanca region, which is also the largest urban area in the Maghreb. A 2005 census estimate listed the population at 3.85 million, though that figure is disputed by locals, who point to a number between 5 and 6 million, citing recent drought years as a reason for many people moving into the city to find work.

The area surrounding the Port is lined with tourist shops. Inland from the harbor is the original Arab town, known as the Old Medina. This area is partially enclosed by the original rampart walls, and is a maze of narrow streets and stone houses. It attracts fewer tourists than the medinas of other Moroccan towns, such as Fes and Marrakech. However, it has undergone some restoration in recent years. Included in this project have been the western walls of the medina, its skala, or bastion, and its colonial-period clock tower.

Built in a semicircle just outside these walls is the town built by the French, known as the French period New Town. Designed by the French architect Henri Prost, it a model of a new town at that time. The main streets of the New Town radiate south and east from Place des Nations Unies, where the main market of Anfa had been. The New Town is possibly the most impressive in Morocco. Former admistrative buildings and modern hotels populate the area. Their style is a combination of Hispano-Mauresque and Art Deco styles.

Casablanca is home to the Hassan II Mosque, designed by the French architect Michel Pinseau and built by Bouygues Construction. It is situated on a promontory looking out to the Atlantic, which can be seen through a gigantic glass floor with room for 25,000 worshippers. A further 80,000 can be accommodated in the mosque's courtyard. Its minaret is the world's tallest at 210 meters. It is the second largest mosque in the world (after the Masjid al-Haram in Mecca).

Work on the mosque was started in 1980, and was intended to be completed for the 60th birthday of the former Moroccan king, Hassan II, in 1989. However, the building was not inaugurated until 1993. Authorities spent an estimated $800 million in the construction of the building.

The Parc de la Ligue Arabe (formally called Lyautey) is the city's largest public park. On its edge is situated the Cathedrale du Sacré Coeur, built in 1930, which is no longer in use, but is a splendid example of Mauresque architecture.

The older, smaller Casablanca Anfa airport to the west of the city which served certain destinations including Sydney, Damascus, and Tunis is scheduled closed to civilian traffic in 2006.

Casablanca is served by two rail stations run by the national rail service, the ONCF. The main long haul station is Casa-Voyageurs, from which trains run south to Marrakech or El Jadida and north to Rabat, and then on either to Tangier or Meknes, Fes, Taza and Oujda. A dedicated airport shuttle service to Mohammed V International Airport also has its primary in-city stop at this station, for connections on to further destinations. 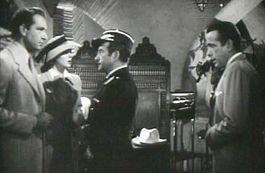 Casablanca was the setting of a 1942 film starring Humphrey Bogart (as Rick) and Ingrid Bergman as (Ilsa). Set in the Vichy-controlled city during World War II, its focus was on Rick's conflict between, in the words of one character, love and virtue: he must choose between his love for Ilsa and doing the right thing, helping her and her Resistance leader husband, Paul Henreid (Victor Laszlo) escape from Casablanca to continue his fight against the Nazis.

The film won three Oscars in 1943, including the Academy Award for Best Picture, and was nominated in five additional categories. The characters, quotes, and music have become iconic, and the film has grown in popularity as time has gone by. It now consistently ranks near the top of lists of the greatest films of all time, and has made Casablanca a household word.

Retrieved from https://www.newworldencyclopedia.org/p/index.php?title=Casablanca&oldid=1095329
Categories:
Hidden category:
This page was last edited on 13 January 2023, at 01:00.
Content is available under Creative Commons Attribution/Share-Alike License; additional terms may apply. See Terms of Use for details.