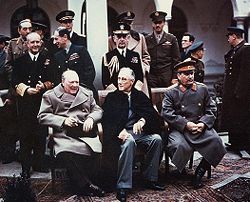 The Yalta Conference, sometimes called the Crimea Conference and codenamed the Argonaut Conference, was the wartime meeting from February 4, 1945 to February 11, 1945 between the heads of government of the United States, the United Kingdom, and the Soviet Union—Franklin D. Roosevelt, Winston Churchill, and Joseph Stalin, respectively. Following on the heels of the Tehran Conference, this meeting resolved a number of outstanding issues between the powers. A rift in the relationship between the two Western powers and their communist ally had already begun to develop as Stalin wanted Eastern Europe as a buffer zone, while Roosevelt believed he could help secure peace through Soviet participation in the United Nations. In the end, they compromised, allowing the Eastern bloc to fall under Soviet influence, and later Soviet dominion. In return, the Soviets did join the U. N., but as part of the compromise, several of their republics were granted nation status and they received a permanent seat on the United Nations Security Council.

The results for Eastern Europe were disastrous as they were held hostage for half a century. The term "Western betrayal" was coined in several of these countries to describe the failure of the Western powers to live up to its claims to promote freedom and democracy throughout the world.

On February 4, 1945 the Big Three (Roosevelt, Churchill and Stalin) convened at Yalta, on the Crimean Peninsula. It was the second of the large war time conferences, preceded by Tehran in 1943, and succeeded by Potsdam (after Roosevelt's death) later in 1945.

After the Tehran Conference in 1943, the three leaders promised to meet again, resulting in the conference held in Yalta. Although Stalin had expressed concern about Roosevelt's health during the Tehran conference, this concern did not translate into action. The Soviet leader refused to travel farther than the Black Sea Resort of Yalta in the Crimean Riviera (then part of the Soviet Union) for the next meeting and, once again, Churchill and Roosevelt took long trips to attend the Yalta summit.

Each of the three powers brought their own agenda to the Yalta Conference. Roosevelt was lobbying for Soviet support in the Pacific theater and the planned invasion of the Empire of Japan; Churchill was pressing for free elections and democratic institutions in Eastern Europe, specifically Poland; while Stalin was attempting to establish a Soviet sphere of influence in Eastern Europe which he deemed essential to Soviet national security. Additionally all three of them were trying to establish an agenda on how to govern post-war Germany. In 1943 a thesis by William Bullitt prophesied the “‘flow of the Red amoeba into Europe’” and Stalin, indeed, had the military advantage. The Soviet Union was already physically in control of most of Eastern Europe. While the Allies were occupied with the invasion of France, at great cost the Soviet Red Army had penetrated the eastern borders of the Third Reich. At the time of Yalta, Russian Marshall Zhukov was only forty miles from Berlin. Moreover, Roosevelt hoped to obtain a commitment from Stalin to participate in the United Nations. Concerning the first topic on the Soviets' agenda, Eastern Europe, the subject of Poland immediately arose. Stalin was quick to state his case as follows:

Accordingly, Stalin made it clear that some of his demands regarding Poland were not negotiable—the Russians were to keep territory from the eastern portion of Poland and Poland was to compensate for that by extending its Western borders, thereby forcing out millions of Germans. Stalin promised free elections in Poland, notwithstanding the recently installed Communist puppet government. However, it soon became apparent that Stalin had no intentions of keeping his promise of free elections. The elections, which were held in January 1947, resulted in the official transformation of Poland into a socialist state by 1949, though they were widely considered rigged in favor of communist parties.

Roosevelt's concern about the Soviet Union entering the Pacific war on the side of Allies can be seen as misplaced. In fact, some argue that Stalin was anxious to reverse the humiliation and territorial losses during the Russo-Japanese War, and hoped to extend Soviet influence into East Asia. However there is some dispute as to whether Roosevelt would ever allow Soviet troops to land in Japan, as can be seen by President Truman's decision to drop the nuclear bombs on Hiroshima and Nagasaki, effectively preventing an invasion.

Roosevelt met Stalin's price, hoping that the Soviets could be dealt with through the U.N. Some Americans later considered Yalta to be a 'sellout', because it encouraged the Soviets to expand their influence into Japan and Asia and also because Stalin eventually violated the terms by forming the Soviet bloc. Furthermore, the Soviets agreed to join the United Nations given the secret understanding of a voting formula with a veto power for permanent members in the Security Council, thus ensuring that each country could block unwanted decisions. Some critics suggested that Roosevelt's failing health (Yalta was his last major conference before he died from a cerebral hemorrhage) was to blame for his seemingly poor judgment. At the time, the USSR had troops in much of Eastern Europe with a military about three times as large as Eisenhower's forces.

The Big Three had ratified previous agreements about the postwar division of Germany: there were to be three zones of occupation, one zone for each of the three dominant nations (France would later get a portion when the USA and Great Britain divided up parts of their zones and gave them to France). Berlin itself, although within the Soviet zone, would also be divided into three sectors, and would eventually become a major symbol of the Cold War because of the division of the city due to the infamous Berlin Wall, constructed and manned by the Soviet-backed Communist East German government.

"The establishment of order in Europe and the rebuilding of national economic life must be achieved by processes which will enable the liberated peoples to destroy the last vestiges of Nazism and fascism and to create democratic institutions of their own choice."[2]

In postwar Europe, Russia would gain the southern half of the Sakhalin Islands and Kuriles, and the northern half of the German province of East Prussia. The nationalists and anti-communists in the Eastern European nations often regard the Yalta Conference as the “Western betrayal.” This is due to the belief that the Allied powers, despite venerating democratic policies, sold out the Eastern Europeans to ensure their own prosperity over the next 50 years. 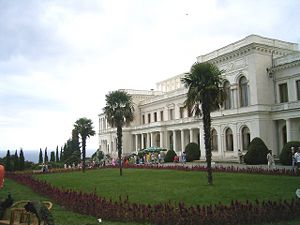 The meetings of three leaders took place in the Grand Livadia Palace.

The conference was held in Yalta, a resort town on the Crimean peninsula in the Soviet Union (now in Ukraine). The American delegation was housed in the Tsar's former palace, while President Roosevelt stayed at the Livadia Palace where the meetings took place. The British delegation was installed in Prince Vorontsov's castle of Alupka. Key members of the delegations were Edward Stettinius, Averell Harriman, Anthony Eden, Alexander Cadogan, and Vyacheslav Molotov. According to Anthony Beevor, all the rooms were bugged by the NKVD. Stalin arrived by train on February 4. The meeting started with an official dinner that evening.

Key points of the meeting are as follows:

Yalta was the last great conference before the end of the war in Europe and was the last trip Roosevelt took abroad before his death. To observers he appeared already ill and exhausted. Arguably, his most important goal was to ensure the Soviet Union's participation in the United Nations, which he achieved at the price of granting veto power to each permanent member of the Security Council. Another of his objectives was to bring the Soviet Union into the fight against Japan, as the effectiveness of the atomic bomb had yet to be proven. As a reward, Soviet Union was allowed to seize the Sakhalin Peninsula and the Kuril Islands, which were under Japanese sovereignty, and some other privileges in colonial China remained intact. The Red Army had already removed Nazi forces from most of Eastern Europe, so Stalin obtained his goals—a significant sphere of influence as a buffer zone. In this process, the freedom of small nations was sacrificed for the sake of stability, which meant that the Baltic countries of Latvia, Lithuania and Estonia would continue to be members of the USSR.