World Map with the participants in World War II.
The Allies depicted in green (those in light green entered after the attack on Pearl Harbor), the Axis Powers in orange, and neutral countries in grey.

The Allied Powers were a group of countries (also known as the Allies of World War II) that consisted of those nations opposed to the Axis Powers during the Second World War. Initially, as war broke out in Europe, Adolf Hitler's Germany, with its expansionist ideology, was opposed by Great Britain, her dominions and colonies, and by France. When France fell, Britain and her overseas possessions and former colonies were more or less alone in opposition to Hitler until the Soviet Union and the United States entered the war.

The Second World War's opposing alliances pitted strong democracies against totalitarian regimes. The conflict and the two sets of alliances can be seen as representing a struggle between freedom and tyranny, although there was some movement between the two alliances. For example, Italy, Hungary, and Romania were among those nations that switched from Axis to the Allied Powers towards the end of the war. This was less because they wanted to side with the victors than because they had been initially coerced into joining the Axis Powers. Members of the Provisional Government for Free India joined the Axis, fighting with Japanese forces more to express its opposition to Britain's colonial rule than because it saw Japan as a natural ally.

The Allies, who won, were also the architects of the United Nations, an international, inter-governmental organization whose goal is to resolve conflicts peacefully and to establish a world of peace, freedom, and justice for all. They signed the Declaration by the United Nations on January 1, 1941, stating that a complete victory against their adversaries was necessary if "life, liberty, independence and religious freedom" were to be defended, human rights and justice preserved in "their own lands as well as in other lands, and that they [were] engaged in a common struggle against savage and brutal forces seeking to subjugate the world." Almost all the founding members of the UN had been anti-Axis during the war. Many of the Allies of World War II were also co-founders of the North Atlantic Treaty Organization (NATO) in 1949. 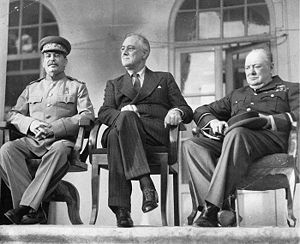 By the time World War II began, the Republic of China had been fighting the Empire of Japan since 1937.

During the 1920s, the Kuomintang government was aided by the Soviet Union, which helped to reorganize the party along the Leninist model of the unification of party, state, and army. However, following the unification of China, Generalissimo Chiang Kai-shek purged leftists from his party and refused to ally with the Communist Party of China to fight against the Japanese, and instead opted to fight both at once. This remained the case even after the Mukden Incident and the puppet regime of Manchuria set up by Japanese troops in 1931. Chiang's anti-communist campaigns continued while he fought small, incessant conflicts against Japan throughout the 1930s. This period saw China lose territories piece by piece to Japan.

Beginning in early 1930s, Germany and China became close partners in areas of military and industrial exchange. Nazi Germany provided the largest proportion of Chinese arms imports and technical expertise. Following the Marco Polo Bridge Incident of July 7, 1937, China and Japan became embroiled in a full-scale war that continued until 1945. Initially, Germany denounced Japanese war crimes in China, such as the Nanking Massacre of 1937. However Germany also recognized that Japan was more capable of fighting the Soviet Union, and soon broke off the cooperation with China in May 1938. The Soviet Union, wishing to keep China in the fight against Japan, supplied China with some military assistance until 1941, after which it made peace with Japan to prepare for the war against Germany.

Even though China had been fighting the longest among all the Allied Powers, it only officially joined the Allies after the attack on Pearl Harbor, on December 7, 1941. Chiang Kai-shek felt Allied victory was assured with the entrance of the United States into the war and he declared war on Germany and the other Axis nations. However, Allied aid remained low as the Burma Road was closed and the Allies suffered a series of military defeats against Japan early on in the campaign. The bulk of military aid would not arrive until the spring of 1945 when more than 1.5 million Japanese troops were trapped in the Chinese Theater; troops that otherwise could have been deployed elsewhere had China collapsed and made a separate peace with Japan.

On September 1, 1939, the German invasion of Poland started World War II. Britain, France, Australia, and New Zealand all declared war on Germany on September 3, 1939. Nepal, Newfoundland, Tonga, South Africa, and Canada followed suit within days. On September 17, 1939, the Soviets invaded Poland from the East. The following year, the U.S.S.R. annexed the Baltic States (Estonia, Latvia and Lithuania) together with parts of Romania, and attacked Finland. The German-Soviet agreement was brought to an end by the German invasion of the U.S.S.R. on June 22, 1941.

The United States joined the Allies following the attack on Pearl Harbor, on December 7, 1941. The Declaration by United Nations, on January 1, 1942, officially united 26 nations as Allies and formed the basis for the United Nations. The informal Big 3 alliance of the United Kingdom, the Soviet Union, and the United States emerged in the latter half of the war, and their decisions determined Allied strategy around the world.

Dates on which states joined the Allies

Following the German invasion of Poland

After the end of the Phony War

After the attack on Pearl Harbor

Formal alliances during the war

These countries were allied to each other by a net of common defense pacts and military alliance pacts signed before the war. The Franco-British Alliance dated back to the Entente Cordiale of 1904 and the Triple Entente of 1907, active during World War I. The Franco-Polish Alliance was signed in 1921, amended in 1927 and again in 1939. The original allies were those states that declared war on Nazi Germany following the German invasion of Poland in September 1939.

The Polish government in exile after 1939 continued the Polish contribution to World War II on several fronts with hundreds of thousands of members of the Polish Army in France and the United Kingdom, as well as the Home Army in occupied Poland. The Soviet Union however, did not recognize the government and in 1943 organized the Polish People's Army under Rokossovsky, around which eventually it constructed the post-war successor state.

British, Dutch, and French colonies fought alongside their metropolitan countries, and many continued their contribution also when the mother countries were occupied.

In addition to the United Kingdom, several independent members of the Commonwealth of Nations, known as the Dominions, declared war on Germany separately, either on the same day, or soon afterwards.

The Oslo Group was an organization of officially neutral countries. Four members later joined the Allies, as governments in exile: the Kingdom of Norway, the Kingdom of the Netherlands, the Kingdom of Belgium, and the Grand Duchy of Luxembourg.

The Republic of Finland was invaded by the U.S.S.R. on November 30, 1939.[1] Later, Finland and the Kingdom of Denmark officially joined the Axis Anti-Comintern Pact. The Kingdom of Sweden remained officially neutral.

Iceland and Greenland, respectively in union with Denmark and a Danish colony, were occupied by the Allies for most of the war. British forces took control of Iceland in 1940, and it was used to facilitate the movement of Lend Lease equipment. Forces from the United States, although they were officially neutral at the time, occupied Greenland on April 9, 1941. The United States also took over in Iceland on July 7, 1941. Iceland declared full independence from Denmark in 1944, but never declared war on any of the Axis powers.

Although Portugal remained officially neutral, the Anglo-Portuguese Alliance was invoked in World War II leading to the establishment of an Allied base in the Azores. Portugal protested the occupation of Portuguese Timor by Allied forces in 1942, but did not actively resist. The colony was subsequently occupied by Japan; Timorese and Portuguese civilians assisted Allied commandos in resisting the Japanese. (See Battle of Timor.) Macao was also occupied by Japan.

The Atlantic Charter was negotiated at the Atlantic Conference by British Prime Minister Winston Churchill and U.S. President Franklin D. Roosevelt, aboard warships in a secure anchorage at Argentia, Newfoundland (located on Placentia Bay), and was issued as a joint declaration on August 14, 1941.

The Atlantic Charter established a vision for a post-World War II world, despite the fact the United States had yet to enter the war.

In brief, the nine points were:

The Atlantic Charter proved to be one of the first steps towards the formation of the United Nations.

The following socialist and pro-Soviet forces also fought against the Axis Powers before or during the Second World War:

The Declaration by United Nations, January 1, 1942, had the following 26 signatories[4]: