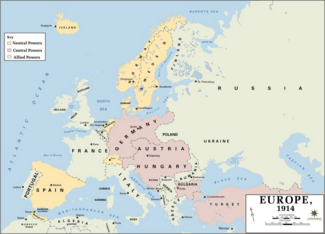 European military alliances in 1914. The Central Powers are depicted in puce, the Allies in grey and neutral countries in yellow.

The Triple Entente ("entente"—French for "agreement") was the alliance formed in 1907 among the United Kingdom of Great Britain and Ireland, the French Third Republic and the Russian Empire after the signing of the Anglo-Russian Entente. The UK already had the Entente Cordiale with France since 1904, while France had concluded the Franco-Russian Alliance in 1894. The Triple Alliance formed in 1882 offered an ominous threat, thus the three nations bonded together in a compact designed to protect them from encroachment or attack. The Entente was in itself a defensive alliance.[1] Fear and suspicion drove the three nations to seek a viable partnership as the German navy and army continued to grow in size and power.[2] With the onset of World War I, the world would see the two alliances finally come to blows. The doctrine of the balance of power was behind the Alliance, which was meant to keep the peace. However, this did not take sufficient account of Triple Alliance ambitions for empire in and beyond the European space.

Though not a military alliance, the alignment of the three powers, supplemented by various agreements with Japan, the United States and Spain, constituted a powerful counterweight to the "Triple Alliance" of Imperial Germany, Austria-Hungary and Italy, the latter having concluded an additional secret agreement with France effectively nullifying her alliance commitments.

Russia had been a member of the League of the Three Emperors with Austria-Hungary and Germany. After the League's collapse during the Alexander von Battenberg affair, German Chancellor Bismarck tried to keep an alliance with Russia. This was formalized in the Reinsurance Treaty of 1887. But when Bismarck was dismissed from office in 1890, Kaiser Wilhelm II failed to renew the treaty and Russia formed a military alliance with France. The UK had been asked to join in an alliance with Germany, but did not agree with Germany's ideological and military goals, and had been in a naval arms race with Germany for decades.

With the addition of Italy in 1915, the Triple Entente was the force that opposed the Central Powers during World War I. After the outbreak of World War I in Europe in August 1914, the three Entente powers undertook in September 4 not to conclude a separate peace with Germany or Austria-Hungary.

But Russia's separate armistice (December 1917) and peace Treaty of Brest-Litovsk on March 3, 1918, ended its alignment with the other Entente powers. The U.K. and France continued to collaborate in ultimately unsuccessful attempts to uphold the postwar order during the 1920s and 1930s, until France's crushing June 1940 defeat in renewed conflict with Germany forced her into a separate armistice, leaving the UK alone in Europe.

The Entente heralded the end of British neutrality in Europe. It was partly a response to growing German antagonism expressed in the creation of the Kaiserliche Marine battle fleet capable of threatening British naval supremacy.

Ironically, the Franco-Russian Alliance which had seemed weak during Russia's defeat in the Russo-Japanese War, later appeared the more powerful alignment, when Russia unexpectedly and rapidly recovered from the defeat and from the Russian Revolution of 1905, and when the UK was added as a diplomatic partner. This contributed to the foreign-policy adventuring and contemplation of pre-emptive war, which culminated in German readiness for conflict in 1914.

In the nineteenth century, Britain adopted a policy of isolationism in continental European politics known as "splendid isolationism." Britain's primary focus was concentrated on maintaining and expanding its massive overseas empire. However, by the early 1900s the European theater began to change dramatically. Britain was in need of allies. For most of the nineteenth century, Britain had regarded France and Russia as its two most dangerous rivals but with the threat of German imperialism Britain's sentiments began to change.

The three main reasons were:

1. France and Britain had signed a number of agreements regarding colonies in North Africa in 1904. The Tangier Crisis had sparked a sudden cooperation between the two countries in the face of their mutual fear of German sponsored Moroccan independence.

2. Russia was recently defeated in the Russo-Japanese War. This display of weakness resulted in less concern over Russian imperialism and more interest in them as a viable ally. The formation of the Triple Alliance in 1882 also left Russia in a very vulnerable position.

3. Britain was very worried about the rising threat of German imperialism. Kaiser Wilhelm II had announced to the world his intentions to create a global German empire and to develop a strong navy. Britain, traditionally having control of the seas, saw this as a serious threat to its own empire and navy.

Britain and France, both facing German imperialism, signed an agreement with each other in 1904 called the Entente Cordiale. Shortly thereafter in 1907 Russia would join the Anglo-Russian Entente to alleviate British fears of German expansion into the Middle East.

France had fought Germany in the Franco Prussian War in 1870 resulting in a dramatic and embarrassing defeat for France. The Germans had forced France to sign a humiliating treaty in 1871 (The Treaty of Frankfurt), which signed over the industrialized region of Alsace-Lorraine to Germany. Ever since relations had been at an all time low. France, worried about the escalating military development of Germany, began building up their own war industries and army as a deterrent to German aggression. As another measure, France developed a strong bond with Russia by joining the Franco-Russian Alliance, which was designed to create a strong counter to the Triple Alliance. France's main concerns were to protect against an attack from Germany, and to reincorporate the lost territories of Alsace-Lorraine. 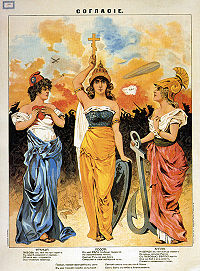 Russia possessed by far the largest manpower reserves of all the six European powers, but was also the most backward economically. Russia shared France's worries about Germany. After the Germans started to reorganize the Turkish army, Russia feared that they would come to control the Dardanelles, a vital trade artery which accounted for two fifths of Russia's exports.

This was also coupled with Russia's long history of rivalry with Austria-Hungary. Austria-Hungary had recently annexed Bosnia and Herzegovina angering Russia immensely. Russia had considered itself the leader of the Slavic world and viewed the invasion as another step towards annexing Serbia and Montenegro. To counter act Austria-Hungary's aggression into the Balkans, Russia signed an agreement with Serbia to aid it militarily in the face of Austro-Hungarian invasion.

The Tsar had also recently fought a grueling war with Japan in 1905 resulting in Russia's transformation into a constitutional monarchy. To counter his enemies militarily and politically he sought to revive the Franco-Russian Alliance. Although it was perceived as useless during the Russo-Japanese War, in the European theater it was invaluable. Russia would also sign the Anglo-Russian Convention of 1907 with Britain to counter act the threat of the Triple Alliance.

The Franco-Russian Alliance, along with the Anglo-Russian Entente and the Entente Cordiale formed the Triple Entente between the UK, France and Russia—an effective deterrent to the Triple Alliance.