The noted states rights advocate John C. Calhoun was born just outside Abbeville and began his first law practice in the city. His ideas helped lead to the American Civil War a decade after his death. The city also played a key role during the Civil War and is called the Birthplace and Deathbed of the Confederacy, because it was here that Jefferson Davis made some of his most important decisions as President of the Confederacy.

It is in the Eastern Standard time zone. Elevation is 591 feet.

The region is home to a number of state parks, as well as the Sumter National Forest. Also nearby in the Savannah River Basin are Lakes Thurmond, Russell, and Hartwell, operated by the U.S. Army Corps of Engineers, and Lake Greenwood and Lake Secession, which are operated by the City of Abbeville. As of the 2010 census[1] the population of the city of Abbeville was 5,237. The racial and ethnic composition was 69.6 percent White, 28.3 percent African-American, 0.2 percent Native American, 0.3 percent Asian. Hispanics or Latinos of any race were 1.0 percent of the population.

During the 1700s most of South Carolina was occupied by the Cherokee Indians. They made several cessions of land during this time and several were with South Carolina. The second of these was in 1755 and they gave up land between the Wateree River and the Savannah River. It was this land that would be settled by French Huguenots and also Scots-Irish Protestants.

The town of Abbeville developed around a spring which was set aside by General Andrew Pickens for public use. Pickens had settled at the Long Cane settlement in Abbeville County, South Carolina, what is now Abbeville proper, prior to the American Revolution. Dr. John de la Howe, a French Huguenot settler in Western South Carolina, is credited with giving the county and town the name of his hometown in France.

The City was officially incorporated as a municipality within the State of South Carolina on December 20, 1832. 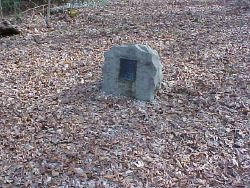 The Rock at Secession Hill

Abbeville has the unique distinction of being both the birthplace and the deathbed of the Confederacy. On November 22, 1860, a meeting was held at Abbeville, at a site since dubbed Secession Hill, to launch South Carolina's secession from the Union; one month later, the state of South Carolina became the first state to secede.

It could also be considered the place where the Civil War was conceived as noted states rights advocate John C. Calhoun was born near there on March 18, 1782. Calhoun practiced law in the city before beginning his political career. Calhoun became a congressman, senator, secretary of war, secretary of state, and Vice President of the United States. He was an outspoken proponent of the institution of slavery.

At the end of the Civil War, with the Confederacy in shambles, Confederate President Jefferson Davis fled Richmond, Virginia and headed south, stopping for a night in Abbeville at the home of his friend Armistead Burt. It was on May 2, 1865, in the front parlor of what is now known as the Burt-Stark Mansion that Davis officially acknowledged the dissolution of the Confederate government.

After the turn of the century Abbeville was the site of a brutal lynching that led to a mass exodus of the black population. In 1916 a crowd of several hundred white people abducted Anthony P. Crawford, then strung him up to a tree and riddled his body with bullets. Crawford was the wealthiest Negro farmer in and around Abbeville and he angered the local whites when he cursed a white man for offering him a low price for the cotton seed he was selling. He had built a school on his land for the children of blacks in Abbeville and also held an office with the Masons of South Carolina. Days after the lynching, Abbeville’s white residents “voted” to expel the Crawford family from the area and seize their property.[2]

Some 50 years later a reconciliation service was held July 12, 2005, at Friendship Worship Center in Abbeville. Hundreds gathered for the service, where white church leaders confessed the sins of their ancestors and apologized to blacks for the lynching of Anthony Crawford and other racial strife that took place there. On the 100th anniversary of the tragic event, Crawford's descendants as well as hundreds of community members, college students, and others gathered in Abbeville for a commemoration event that included a ceremony unveiling a historical marker.[3]

In 2008, Abbeville celebrated its 250th anniversary. Abbeville has a rich heritage of textile manufacturing that continues with its two thriving Milliken plants. It is also the home of Prysmian Cable, Flexible Technologies, and Carolina Fabrication. The area also has several post-secondary education choices including Erskine College in nearby Due West and Lander University located in Greenwood. Piedmont Technical College is a two-year public institution in Greenwood with a satellite campus in Abbeville. The new Abbeville Area Medical Center is located within the City, and boasts state-of-the-art facilities and medical care.

Also in 2008, Abbeville was announced as one of 16 finalists in the annual All-America City Award.[4] The award is given annually by The National Civic League.

At the beginning of the twentieth century there were many "road companies" that produced shows in New York City. Once the production was assembled, the show traveled throughout the country. One of the more popular tours went from New York to Richmond, Virginia to Atlanta, Georgia. For a number of years, Abbeville was an overnight stop for these touring companies. As a result, several members of the community decided that if this area had a facility Abbeville could see the shows and not just the performers.

On October 1, 1908, what was then the Abbeville District dedicated a new Court House and City Hall. The Abbeville Opera House was made a part of those buildings. Some months later the 7500 square foot stage with a fly loft, cat walk and auditorium, was officially opened. The first show was the The Great Divide.

From that time on, many of the greats and near-greats played on the Opera House stage. The Ziegfeld Follies, Jimmy Durante, Sarah Bernhardt, and many other memorable performers and productions were presented as the big road shows moved down the eastern seaboard. Vaudeville was in its heyday as was the Abbeville Opera House.[5]

The Burt-Starke House is significant to Civil War history as it served as the location of President Jefferson Davis’ last Council of War. Despite a number of military surrenders in the preceding months, Davis was determined to continue the struggle for an independent Confederacy. He planned to rally the troops in Lt. Gen. Richard Taylor’s Department of Alabama, Mississippi and East Louisiana, cross the Mississippi, and join with forces there. Davis was steadfast in this resolve when he reached Abbeville and took up quarters at the home of his personal friend, Major Armistead Burt. During the meeting in the southeast parlor with John C. Breckenridge, Braxton Bragg, as well as Generals Basil W. Duke, George Gibbs Dibrell, and John C. Vaughn, Davis was advised that any attempt to continue the war would inflict more misery on the South, striking the death knell of the Confederate government.

The two-story frame house, built in the 1830s, is Greek Revival in style. It was listed in the National Register on April 3, 1970, and designated as a National Historic Landmark on October 5, 1992.[6]

Trinity Episcopal Church was founded in 1842. The current Gothic Revival-style building was built in 1859 of brick formed of the clay on which the church sits. The Bishop came from Charleston to consecrate it on November 4, 1860.

Features include an historic tracker organ designed by John Baker of Charleston, Stained glass windows, original handmade pews, its original altar, and a 125-ft.spire. The large stained-glass chancel window was constructed in England. Plaques honor families instrumental in developing Abbeville. Three of Abbeville's five confederate colonels were members of Trinity and are buried in its cemetery along with one union soldier.

The consecration of the church took place just three weeks before the fateful Secession meeting on November 22. It was listed on the National Register of Historic Places in May 1971.[7]