The Silver Star is the third highest military decoration that can be awarded to a member of any branch of the United States Armed Forces. The Silver Star medal had its beginning during World War I and is awarded for valor against an opposing armed force.

The Silver Star is awarded for gallantry in action against an enemy of the United States not justifying a higher award. It may be awarded to any person who, while serving in any capacity with the U.S. Armed Forces, distinguishes himself or herself by extraordinary heroism involving one of the following actions:

The Silver Star differs from the Distinguished Service Cross, Navy Cross or Air Force Cross, in that it requires a lesser degree of gallantry and need not be earned while in a position of great responsibility. Soldiers who received a citation for gallantry in action during World War I were eligible to apply to have the citation converted to the Silver Star Medal.

The individual services can award the Silver Star to not only their own members, but to members of other branches of service, foreign allies, and even to civilians for "gallantry in action" in support of combat missions of the United States military.[1]

The Valorous Unit Award is considered the unit level equivalent of a Silver Star Medal. 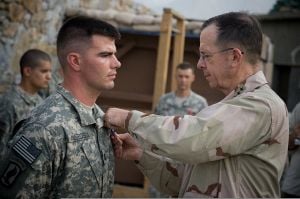 The Silver Star is the successor decoration to the Citation Star which was established by an act of the United States Congress on July 9, 1918 by President Woodrow Wilson.

On February 22, 1932, the date that would have been George Washington's 200th birthday, Army Chief of Staff General Douglas MacArthur revived General Washington's "Badge for Military Merit (1782)" as the Purple Heart. That same year he also successfully advocated for conversion of the "Citation Star." When his recommendation was approved by the Secretary of War, the 3/16' silver star was converted from a ribbon device" to a full-fledged medal. On July 19, 1932, the Secretary of War approved the Silver Star Medal to replace the Citation Star.

The original Citation Star is incorporated into the center of the Silver Star Medal, and the ribbon for the Silver Star Medal is based closely on the Certificate of Merit Medal. It was retroactive to include those cited for gallantry in action in previous campaigns back to the Spanish-American War.

The number of Silver Stars awarded from World War I to the present is estimated to be somewhere between 100,000 and 150,000. Given that more than 30 million American men and women have served in uniform during that time period, the Silver Star is a rare award, bestowed on fewer than 1 in every 250 veterans of military service.[1]

The Silver Star Medal was designed by Rudolf Freund of Bailey, Banks and Biddle, and consisted of a gilt-bronze five-pointed (point-up in contrast to the point-down design of the Medal of Honor) star bearing a laurel wreath at its center. The ribbon design incorporated the colors of the flag, and closely resembled the medals earliest predecessor, the Certificate of Merit Medal. The reverse of the medal is blank except for the raised text "For Gallantry in Action," beneath which is usually engraved the name of the recipient.

The gold hue of the gilt-bronze star seems at odds with the award's name, Silver Star, but the title derives from the medal's World War I lineage and the 3/6" silver star, once displayed on a victory ribbon, and now prominently displayed in the center of the medal.[1]

Additional decorations of the Silver Star are denoted in the U.S. Army and Air Force by oak leaf clusters, while the Navy, Coast Guard, and Marine Corps issue award stars.

Mary Roberts Wilson was the first woman to be awarded the Silver Star for gallantry in combat for her action during the Battle of Anzio during World War II. With her Army evacuation hospital under German shellfire, Wilson continued supervising her nursing staff of 50, allowing the hospital to continue functioning. Tom Brokaw devoted an entire chapter to Wilson's exploits in his best-selling book on World War II-era Americans, The Greatest Generation.

When the Germans bombed the field hospital at Anzio Beach, Italy during WWII, medical personnel evacuated 42 patients by flashlight without incident, and for their bravery four nurses: 1st Lt. Mary Roberts, 2d Lt. Elaine Roe, 2d Lt. Rita Virginia Rourke, and 2d Lt. Ellen Ainsworth, received the first Silver Star medals awarded to women in the U.S. Army. Ainsworth, who was killed during the attack, was awarded the medal posthumously.

Spec. Monica Brown from the 782nd Brigade Support Battalion, 4th Brigade Combat Team, 82nd Airborne Division, in Afghanistan became the second woman since World War II to earn a Silver Star for gallantry in combat in March of 2008. A medic from Lake Jackson, Texas, she was only 18 when she used her body to shield fellow soldiers who had been wounded.[2]

Three nurses serving in World War I were posthumously awarded the Silver Star in 2007.

General Douglas MacArthur who, in 1932 successfully advocated for elevation of the Citation Star to become a Medal for Gallantry, himself earned seven Citation Stars in World War I.

The Stolen Valor Act of 2005, signed into law by President George W. Bush on December 20, 2006, is a U.S. law that broadens the provisions of previous U.S. law addressing the unauthorized wear, manufacture, sale or claim (either written or verbal) of any military decorations and medals.

Specific new provisions in the Act include: granting more authority to Federal law enforcement officers, extending scope beyond the Medal of Honor, broadening the law to cover false claims whereas previously an overt act had to be committed, covering mailing and shipping of medals, and protecting the reputation and meaning of military heroism medals.

Under the act, it is illegal to wear, buy, sell, barter, trade or manufacture "any decoration or medal authorized by Congress for the armed forces of the United States, or any of the service medals or badges awarded to the members of such forces."[3]

Retrieved from https://www.newworldencyclopedia.org/p/index.php?title=Silver_Star&oldid=1098437
Categories:
Hidden category:
This page was last edited on 29 January 2023, at 22:08.
Content is available under Creative Commons Attribution/Share-Alike License; additional terms may apply. See Terms of Use for details.