This page is about the legendary race, for the medical condition see dwarfism 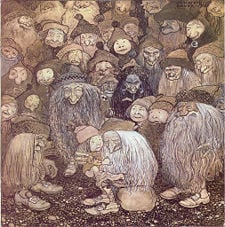 Men hur kommer man in i berget, frågade tomtepojken ("But how do I get into the mountain?" the young dwarf asked.) by John Bauer

A dwarf is a mythical creature, appearing most frequently in Norse mythology. Humanoid in form, but short and stocky, they are connected with the Earth and are often said to be miners, engineers, and craftsmen. The Dwarf is also common in Germanic mythologies, fairy tales, fantasy fiction, and role-playing games, and recently were made popular by the collective works of twentieth century fantasy author J.R.R. Tolkien.

The dwarf is an example of creatures who have some mystery attached to them, some ability or nature that transcends the known world, suggesting the existence of creatures and a world beyond this physical realm. Perhaps they originate in real people, those suffering from dwarfism, or simply people from distant lands with different appearance and skills. Whatever their origin, the dwarf's existence today plays a role in expanding the imagination, towards a world beyond the external and material.

The word dwarf appears in numerous forms in the old languages of Europe: In Middle Dutch is is dwerch, in contemporary Dutch it appears as dwerg; in Old High German it is twerg, while in Middle High German it is dwerch or dwarch. And in Old Frisian it appears as dwirg. The contemporary English spelling comes from the Old English dweorg or dweorh.[1]

The plural form, dwarfs, has been traced to the seventeenth century. The alternate plural, dwarves, has been recorded in the early eighteenth century, but was not generally accepted until used by philologist J. R. R. Tolkien in his fantasy novel, The Hobbit. Neither is the historical plural: "dwarf" was pluralized dwarrow in Anglo-Saxon.[2] Although dwarrow has passed from the language, both "dwarfs" and "dwarves" are in current use. Many grammarians prefer "dwarfs," many fantasies prefer "dwarves." The form "dwarfs" is generally used for human beings affected by dwarfism; the form "dwarves" is used for the mythical people described by Tolkien and other authors. 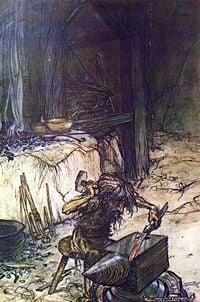 Generally dwarves are described as shorter than humans, about the height of a three-year old human child (approximately three feet tall), ugly, big-headed, stockier, and hairier, and usually sporting full beards. Though slow runners and poor riders, dwarves are said to be excellent warriors and defenders of their strongholds. They prefer to live underground and/or in mountainous areas.

Dwarves are often reputed to have accumulated treasures of gold, silver, and precious stones, and to pass their time in fabricating costly weapons and armor.

Did you know?
Dwarves are famed miners and metalsmiths, and some myths suggest they have the ability to forge magical items.

They are famed miners and smiths, although, like humans, they specialize in any number of trades. Some literature ascribes to dwarves the ability to see in the dark and other adaptations for living underground. Some myths suggest that dwarves have the ability to forge magical items. In Norse mythology, for instance, dwarvish smiths created some of the greatest and most powerful items of power, including the magic chain Gleipnir that bound the wolf, Fenris, as well as Mjolnir, the hammer of Thor.

Stories of dwarves may have a historical background: During the Bronze Age, tin miners from southern and south-eastern Europe slowly migrated northwest, since the relatively rare tin, which is needed to make bronze, was more common in the north. Being southerners, they generally were of shorter stature than northern Europeans and had darker skin, hair, and beards. Their knowledge of metallurgy might have seemed magical to the northerners, whose lifestyle was still neolithic; the southerners' superior weapons and armor might well have been perceived as enchanted. This would explain why stories of dwarves are especially common in Northern Europe, and also why dwarves are portrayed as workers, while few other mythological creatures seem to be associated with any kind of organized industry.

More generally, the pygmies of Africa, the short Inuits, Sami (Lapps), the Asian Dropa pygmies of Tibet, short rain forest natives, people with dwarfism, and similarly short people may have had a hand in the origin of dwarf legends. Another origin might go back to hunter-gatherer times, when perhaps only those with physical defects would be available to do anything other than hunting and gathering. Those with dwarfism might become permanent craftsmen, and an association between crafting and dwarfism might have developed. 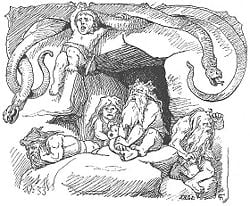 In Norse mythology, dwarves are highly significant entities associated with stones, the underground, and forging. Apart from the Eddas, they notably appear in the fornaldarsagas. They seem to be interchangeable, and may be identical, with the svartálfar (black elves), and sometimes the trolls (compare also with vetter, a class of beings from later Scandinavian folklore). The Völuspá divides the dwarves into what may be three tribes, lead by, respectively, Mótsognir, their first ruler; secondly Durinn, and finally Dvalinn, who according to the Hávamál brought them the art of rune writing.

The dwarves are said to have come into existence while Odin and his brothers Vili and Vé fabricated the world from the corpse of the cosmic giant, Ymir. They spontaneously generated, as maggots were thought to, in the dead flesh (earth or stone). The gods later gifted them with intelligence and human-like appearance. So it is said in the Völuspá: Freyja in the dwarfs' cave

In Norse mythology dwarves are mostly seen as selfish, greedy, and cunning. They are skilled metal-workers and the makers of most of the artifacts of the gods, both Æsir and Vanir. Among their most famous creations are the spear Gungnir, and the golden ring, Draupnir, of Odin; Mjolnir, the hammer of Thor; the golden hair of Sif; Freyja's necklace, Brísingamen; and even the ship Skíðblaðnir of Freyr. The dwarves also fabricated a certain kind of helmet, called huliðshjálmr (concealing helmet), or sometimes a cloak, with which they could make themselves invisible. They are also vengeful and Hervarar saga relates that when king Svafrlami had forced the dwarves Dvalin and Durin to forge the magic sword Tyrfing, the dwarves cursed it so it would bring death to Svafrlami and cause three evil deeds. In Ynglingatal, it is told how King Sveigder is lured into a stone by a dwarf.

In Scandinavia the origin of the dwarfs was similar to Norse mythology, however the creatures were inter-changeable with trolls. They were sometimes referred to as Ebeltoft, or "hill-people," because they were said to live in the hills and mountains. They often appeared in ballads throughout Scandinavia, such as in Eline af Villenskov, Sir Thynne, and the Heimskringla, where they are described as friendly creatures that are often kind towards humans, incredibly wealthy and rich, but also very ugly.[3]

German dwarfs are more mysterious than the others. They often shy away from human contact, choosing to stay in their underground dwellings, although they occasionally will test a human, and if they are able to gain their trust, the dwarf will reward the human with a treasure. However, German dwarfs do not seem able to speak human language. Yet, most of the oral traditions involved humans encountering dwarfs. Both The Hill Man at the Dance and The Dwarfs Feast tells of a dwarf presenting a human with an allegorical treasure, while The Dwarf Stealing Corn and The Dwarf Borrowing Bread are anecdotal stories that revolve around their mischievous behavior.[4]

Dwarves have made appearances in European stories and folklore for centuries. Often times they were depicted as mischievous, elusive creatures, akin to faeries. Other times they were viewed as working for humans as craftsmen and engineers. More ambiguous are the dwarfs found in attendance on ladies in romances. Although these might be humans afflicted with dwarfism who were often kept as curiosities by courts and nobles of the era, the ladies were often of uncertain origin themselves. Many enchantresses were fairies, and their attendants might likewise have been non-human.[5] In a way, this depiction of dwarves led into their usage in fairy tales, the two most famous being, Snow White and the Seven Dwarfs and Rumpelstiltskin.

The works of the most famous fantasy author of the twentieth century, J.R.R. Tolkien, are a staple in the contemporary world of fantasy, and as such are often imitated. Modern day perceptions of dwarves derive mostly from Tolkien's cosmology. Tolkein's Dwarves were created by Aulë, one of the Valar, when he grew impatient waiting for the coming of Children of Ilúvatar. Ilúvatar (who represents God) gave them life after speaking to Aulë about what he had done and seeing that he was both humble and repentant.

Dwarves in Tolkien's works are long-lived, living nearly four times the age of humans (about 250 years), but are not prolific breeders, having children rarely and spaced far apart, and having few women among them. A point of interest comes from the allusion of Tolkien to female dwarves having beards, which was borrowed by other writers. Tolkien writes his dwarf-women are "in voice and appearance, and in garb if they must go on a journey, so like to dwarf-men that the eyes and ears of the other peoples cannot tell them apart."[6] In later writings, Tolkien directly states that his female dwarves have beards "from the beginning of their lives", as do the males.[7]

Dwarvish children are cherished by their parents, and are defended at all costs from their traditional enemies, such as Orcs. A long-standing enmity between Dwarves and Elves is also a staple of the racial conception. 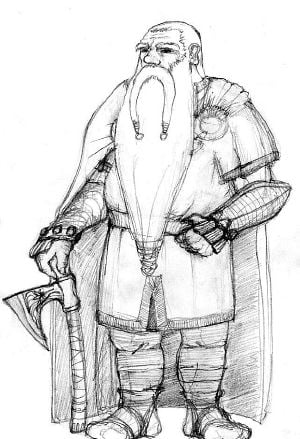 A modern depiction of a dwarf

Many modern views of dwarves have been inspired by Tolkien's works. The typical fantasy dwarf is, like the original dwarves, short in stature, long-bearded and skilled at mining and metallurgy. They are often depicted as having a low affinity for most magical abilities and/or a resistance to magic. In some stories, dwarves have a bad reputation for stealing treasure. Other characteristics of dwarves include long (but mortal) life, antipathy to Elves and distrust to other races.

Writers of fiction have devised many new powers for dwarves, and modern dwarves have no strict definition. The dwarves of the Artemis Fowl series by Eoin Colfer act as a sort of earthworm, tunneling through soil and loose rocks and getting nutrition thereby, excreting the earth as fast as they eat it. In the Inheritance Cycle by Christopher Paolini the dwarves are made out to be a proud and powerful race, with a complex government, religion, and culture. These dwarves burrow deep inside mountains, being very skilled miners, and create entire civilizations underground.