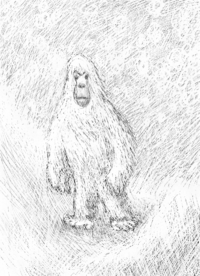 The yeti is an alleged ape-like animal said to inhabit the Himalayan region of Nepal and Tibet. The names yeti and Meh-Teh are commonly used by the people indigenous to the region, and are part of their history and mythology. Most mainstream scientists, explorers, and writers consider current evidence of the yeti's existence to be weak and better explained as a hoax, legend, or misidentification of known species.

Nevertheless, the yeti remains one of the most famous creatures of cryptozoology. Such representations confirm that the idea of the yeti satisfies some psychological need to believe in myths, legends, and the existence of life that is not limited to the physical world known to scientists.

The yeti has often been compared physiologically to the American sasquatch, as both are large, hold a structural similarity to the great apes family, are covered in hair, have a sagittal crest atop their heads and possess an extremely potent smell. However, unlike sasquatch, there have been few visual sightings of the yeti at close range reported since the twentieth century; much of current understanding of the yeti comes from artistic representations in ancient temples and monasteries, as well as stories and legends passed down by the people of the Himalayas. Because of this, there are many discrepancies as to what exactly the yeti looks like.

Some have suggested that the yeti is light colored, so as to blend in with the snow, and always walks upright, while others have stated that the yeti is smaller, of darker color, walks on four legs like a bear but stands on all two feet when scared or threatened, as gorillas are known to do. Because of the location of the yeti and the romantic adventures associated with expeditions to discover one, the image of the yeti as a monster has not as easily been dropped from popular interest as has the American sasquatch.

The Himalayan range at Yumesongdong in Sikkim, in the Yumthang River valley

For centuries, the people who have lived in the Himalayan region of Nepal, India, and Tibet have believed that the mountains were sacred and mysterious places, possibly due to the fact that it is one of the most remote and inaccessible locations on the planet. Such a reverence for nature has often been accompanied by a strong projection of supernatural elements and beliefs in similar regions. This is the case in the Himalayas, where many magical creatures were said to inhabit the mountains, one being the yeti.[1]

Different cultures in the region have held different opinions of the yeti over the years. The Sherpas for example have an almost ambivalent feeling towards the creature, often using it as bed-time story to help keep children disciplined. The Tibetans, on the other hand, have often viewed the yeti as a creature to be dreaded, and it is seen as ferocious in mural artwork. In Nepal, there are stories of yetis coming down from the mountain to feed off of livestock, occasionally terrorizing the local population directly.

It should be noted, however, that these stories may actually be combinations of many different types of creatures and legends. Interpretations and translations by Westerners over the years have left the idea of the yeti somewhat confused. This is well seen in the creature's name. Yeti derives from yeh-teh which refers to an animal that resembles the American sasquatch on a smaller scale, while meh-teh translates as "man beast,"[2] which, from the vantage point of popular perception is a more fitting description. Yet it is the term "yeti" that has survived as the popular favorite.[1]

The yeti was first introduced to the Western world in 1921, by Henry Newman, a reporter for the Calcutta Statesmen. Writing about a British expedition into the Himalayas, led by Lieutenant Colonel C. K. Howard Bury, Newman noted that the party observed figures moving above them at about 20,000 feet. When the climbing party finally arrived at the spot, they found foot prints much larger than any human could have made. The Sherpas attending the climb told Bury that the prints were made by the creature known as metoh-kangmi. Metoh-kangmi is a generic term used in the region for many creatures, but Bury mistook it for the name of the creature. Newman in turn mistranslated Bury's misunderstanding, believing that metoh kangmi was Tibetan for "abominable snowman."[3]

Thus, the Western world was exposed to a mysterious creature that captured the imagination and attention of the public. For decades after the story, expeditions from around the world would come to the Himalayas, some to climb, for the first time, the world's largest mountain, Mount Everest, some in search of the snowman. Ironically, the intense interest that the abominable snowman story created also helped develop interest in the sasquatch, which was viewed as the "American yeti."

In 1925, N. A. Tombazi, a photographer and member of the Royal Geographical Society, allegedly saw a creature at about 15,000 feet (4,572 meters) near Zemu Glacier. Tombazi later wrote that he observed the creature from about 200 or 300 yards, for about a minute:

Unquestionably, the figure in outline was exactly like a human being, walking upright and stopping occasionally to pull at some dwarf rhododendron bushes. It showed up dark against the snow, and as far as I could make out, wore no clothes." About two hours later, Tombazi and his companions descended the mountain, and saw what they assumed to be the creature's prints, described as "similar in shape to those of a man, but only six to seven inches long by four inches wide.... The prints were undoubtedly those of a biped.[4]

Western interest in the yeti peaked dramatically in the 1950s. While attempting to scale Mount Everest in 1951, Eric Shipton took photographs of a number of large prints in the snow, at about 19,685 ft (6,000 m) above sea level. These photos have been subject to intense scrutiny and debate. Some argue they are the best evidence of Yeti's existence, while others contend the prints to be from a mundane creature, and have been distorted by the melting snow.

Perhaps the largest expedition in search of the yeti was the Daily Mail Snowman Expedition of 1954. Mountaineering leader John Angelo Jackson made the first trek from Everest to Kangchenjunga during which he photographed symbolic paintings of the yeti at Thyangboche.[5] Jackson tracked and photographed many footprints in the snow, most of which were identifiable. However, there were many large footprints which could not be identified. The flattened footprint-like indentations were attributed to erosion and subsequent widening of the original footprint by wind and particles. Most surprising of the expedition however was the team's acquisition of hair specimens from a scalp found in Pangboche monastery. 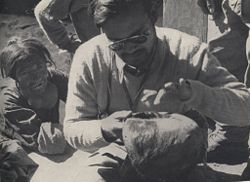 The hair was analyzed by Frederic Wood Jones, an expert in human and comparative anatomy, comparing them with hairs from known animals such as bears and orangutans. The hairs were black to dark brown in color in dim light, and fox red in sunlight. None of the hairs had been dyed and were probably exceedingly old. Wood-Jones was unable to pinpoint the animal from which the Pangboche hairs were taken. He was, however, convinced that the hairs were not of a bear or anthropoid ape. He concluded that the hairs of the Pangboche scalp were not actually from a scalp. He contended that some animals do have a ridge of hair extending from the pate to the back, but no animals have a ridge (as in the Pangboche relic) running from the base of the forehead across the pate and ending at the nape of the neck. He suggested that the hairs were not from the head of a coarse-haired hoofed animal, but from its shoulder.[1] 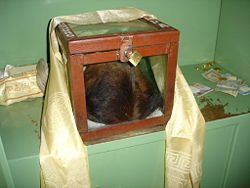 Beginning in 1957 wealthy American oilman Tom Slick funded several missions to investigate yeti reports. In 1959, supposed yeti feces were collected by Slick's expedition; fecal analysis found a parasite which could not be classified, which may help in determining the existence of the yeti since parasites are most often unique to their host.[3]

In 1960 Sir Edmund Hillary mounted an expedition to collect and analyze physical evidence of the yeti. He sent a yeti "scalp" from the Khumjung monastery to the West for testing. The results indicated the scalp to be manufactured from the skin of the serow, a goat-like Himalayan antelope, but some disagreed with this analysis. Shackley said that the "hairs from the scalp look distinctly monkey-like, and that it contains parasitic mites of a species different from that recovered from the serow.[1]

In 1970 British mountaineer Don Whillans claims to have witnessed a creature when scaling Annapurna. While scouting for a campsite, Whillans heard some odd cries which his Sherpa guide attributed to a yeti's call. That very night, Whillans saw a dark shape moving near his camp. The next day, he observed a few human-like footprints in the snow, and that evening, viewed with binoculars a bipedal, apelike creature for 20 minutes as it apparently searched for food not far from his camp.

Many modern scientists discredit the idea of the yeti for numerous reasons.[6] First, the evidence of the yeti's existence is thin. Large footprints in the snow are vague at best, and the alleged physical remains found in local temples have proven inconclusive. It is more parsimonious to conclude that what has been believed to be sightings of yetis were actually misidentification of known animals of the region, particularly bears. To date, the only great apes known to inhabit an area of such extreme climate conditions as the Himalayas are humans; all others live in tropical regions, and early hominids that did in fact move into colder areas are now extinct.

Perhaps due to the romance of travel and exploration attached to the area the yeti is alleged to inhabit, the yeti has remained an iconic and legendary figure. The yeti is seen in pop culture as a mysterious creature, living in a far away land. It has been represented in many films over the years, including the 1957 horror classic The Abominable Snowman. Such representations confirm that the idea of the yeti satisfies some psychological need to believe in myths and legends even in an era where science has debunked so many as hoax or fabrication. Equally important to human nature seems to be the possibility that there are regions left on our increasingly modernized planet that are not fully explored, in which lie mysteries yet to be explained.

Recounts the 1955 Daily Mail, by the scientific officer of the expedition, this is a very detailed analysis of not just the "Snowman" but the flora and fauna of the Himalaya and its people.

The expedition that inadvertently coined the term "Abominable Sbowman."

Retrieved from https://www.newworldencyclopedia.org/p/index.php?title=Yeti&oldid=1043916
Categories:
Hidden category:
This page was last edited on 15 October 2020, at 09:45.
Content is available under Creative Commons Attribution/Share-Alike License; additional terms may apply. See Terms of Use for details.