The veriform appendix or appendix is a narrow, elongated, blind-ended extension of the large intestine of certain mammals. This worm-like tube projects from the cecum, the first part of the large intestine, near the juncture with the small intestine. More correctly known as veriform appendix versus appendix, this hollow tube is present only in humans, certain anthropoid apes, and the wombat (an Australian marsupial) (Winter and O'Dwyer 2001).

The veriform appendix is rather well-known despite its small size and obscure location, both because of its propensity to be easily infected by bacteria, leading to appendicitis, and because the function of the appendix has remained obscure for years. Indeed, the lack of any known function for the appendix has been an often cited evidence for the evolutionary theory of descent with modification, being posited as an example of a vestigial structure—one that had value in mammalian ancestors but is no longer functional in modern-day humans or of much reduced function.

In recent years, however, evidence has been uncovered for certain useful functions of the appendix in both fetal and adult humans. While this does not counter the theory of descent with modification, and other examples of vestigial organs without any known function remain (such as eyes in blind cavefish), this development does emphasize the developing nature of science.

The term "vermiform" comes from Latin and means "wormlike in appearance."

In humans, the appendix is located in the lower right quadrant of the abdomen, or more specifically, the right iliac fossa (Paterson-Brown 2007). Its position within the abdomen corresponds to a point on the surface known as McBurney's point. While the base of the appendix is at a fairly constant location, 2 centimeters below the ileocaecal valve, the location of the tip of the appendix can vary from being retrocaecal or behind the cecum (74 percent) to being in the pelvis to being extraperitoneal (Paterson-Brown 2007). In rare individuals with situs inversus, the appendix may be located in the lower left side. In the fetus, where it first appears at around the sixth week of development, the appendix is high up in the abdomen but later moves down to its final position (Winter and O'Dwyer 2001).

In humans, the appendix averages six to nine centimeters in length (Winter and O'Dwyer 2001), but can range from 2 to 30 centimeters. It is typically longer in males. The diameter of the appendix is usually only between 7 and 8 mm, and may be partially or completely closed after mid life. The longest appendix ever removed measured 26 centimeters or 10.24 inches (Guinness 2007).

The appendix was first described in 1521 by Italian anatomist Berengario da Carpi, although it appeared in anatomical drawings of Leonardo da Vinci from 1492 and the first record of what may have been the appendix appeared around the third century AD in the work of Aretaios (Winter and O'Dwyer 2001).

The biological purpose of the appendix in humans has mystified scientists for some time and continues to be speculative. Some people have a congenital absence of an appendix and many people have had their appendix removed because of bacterial infection (which can cause death) and yet there have no reports of impaired immune or gastrointestinal function in these people.

The most common explanation is that the appendix is a vestigial structure that had an important function in mammalian ancestors, such as helping to break down cellulose, but that this structure lost its purpose over time and diminished in size (Kent 2002). Thus, today it has no absolute purpose, but remains as evidence of evolutionary descent with modification. In The Story of Evolution, Joseph McCabe argued this view:

The vermiform appendage—in which some recent medical writers have vainly endeavoured to find a utility—is the shrunken remainder of a large and normal intestine of a remote ancestor. This interpretation of it would stand even if it were found to have a certain use in the human body. Vestigial organs are sometimes pressed into a secondary use when their original function has been lost.

One potential ancestral purpose put forth by Darwin (1871) was that the appendix was used for digesting leaves as primates. Over time, we have eaten fewer vegetables and have evolved, over millions of years, for this organ to be smaller to make room for our stomach. 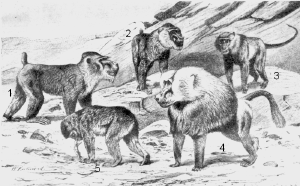 The appendix is more developed in Old World monkeys (Fisher 2000).

Loren Martin, a professor of physiology at Oklahoma State University, argues that "For years, the appendix was credited with very little physiological function. We now know, however, that the appendix serves an important role in the fetus and in young adults" (Rowland 2007). In fetuses, Endocrine cells have been found in the appendix of 11 week old fetuses that produce compounds (biogenic amines and peptide hormones that contribute to "biological control (homeostatic) mechanisms." In adults, Martin argues that the appendix acts as a lymphatic organ, with immune function. The appendix is experimentally verified as being rich in infection-fighting lymphoid cells, suggesting that it indeed might play a role in the immune system.

Zahid (2004) similarly suggests that the appendix plays a role in both manufacturing hormones in fetal development as well as functioning to "train" the immune system, exposing the body to antigens in order that it can produce antibodies. He notes that doctors in the last decade have stopped removing the appendix during other surgical procedures as a routine precaution, because it can be successfully transplanted into the urinary tract to rebuild a sphincter muscle and reconstruct a functional bladder.

Researchers at Duke University propose that the appendix serves as a safe haven for useful bacteria when illness flushes them from the rest of the intestines, a function that would be useful in sparsely populated areas where people would be less likely to pass these germs to one another (AP 2007). This would explain the strong immune activity and the apparent health of those without one in developed countries—potentially in combination with the possibility that strong antibiotics prevent us from using the appendix for the reason it developed.

Mucinous adenocarcinoma of the appendix tip

Medically, the appendix is quite important because of a propensity for bacterial infection (Kent 2002; Winter and O'Dwyer 2001). This can lead to inflammation of the appendix, known as appendicitis. This is the most common disease of the appendix. In the United Kingdom, 1.9 females and 1.5 males per thousand get acute appendicitis every year (Winter and O'Dwyer 2001). Another disease, appendix cancer is quite rare and accounts for only about 1 in 200 of all gastrointestinal malignancies. The most common type is carcinoid tumor with adenocarcinoma next.

In the case of appendicitis (or epityphlitis), virtually all cases lead to require removal of the inflamed appendix, either by laparotomy or laparoscopy. Untreated, the appendix will rupture, leading to peritonitis, then shock, and, if continued untreated, death. The main sign is abdominal pain, which can initially be vague and poorly localized (Winter and O'Dwyer 2001). Pain often begins in the center of the abdomen where the lining of the stomach is irritated then moves lower right as the condition develops. It is important to note that this makes diagnoses difficult in the early stages because only an MRI can detect it. Appendicitis presents as pain in the right lower quadrant with rebound tenderness (pain upon removal of pressure rather than application of pressure). In particular, it presents at McBurney's point, 1/3 of the way along a line drawn from the Anterior Superior Iliac Spine to the Umbilicus. Typically, point (skin) pain is not present until the parietal peritoneum is inflamed as well. Fever and immune system response are also characteristic of appendicitis. It is important to see a physician if stomach pain is present.

Diagnosis is so difficult that many appendices removed have been found to be healthy (including up to thirty percent in one Swedish study) (Kent 2002). While diagnosis improves as inflammation develops, this delay also increases the danger of an appendix bursting (Kent 2002).

The surgical removal of the vermiform appendix is called an appendicectomy (or appendectomy). This procedure is normally performed as an emergency procedure, when the patient is suffering from acute appendicitis. In the absence of surgical facilities, intravenous antibiotics are used to delay or avoid the onset of sepsis; it is now recognized that many cases will resolve when treated non-operatively. In some cases the appendicitis resolves completely; more often, an inflammatory mass forms around the appendix. This is a relative contraindication to surgery.