Toni Morrison (February 18, 1931 – August 5, 2019), was a Nobel Prize-winning American author, editor, and professor. Morrison helped promote Black literature and authors when she worked as an editor for Random House in the 1960s and 1970s, where she edited books by authors including Toni Cade Bambara and Gayl Jones. Morrison herself would later emerge as one of the most important African American writers of the twentieth century.

Her novels are known for their epic themes, vivid dialogue, and richly detailed black characters; among the best known are her novels The Bluest Eye, published in 1970, Song of Solomon, and Beloved, which won the Pulitzer Prize for Fiction in 1988. This story describes a slave who found freedom but killed her infant daughter to save her from a life of slavery.

Morrison is the first African American woman to win the Nobel Prize in Literature. In 2001 she was named one of the "30 Most Powerful Women in America" by Ladies' Home Journal.

Toni Morrison was born Chloe Ardelia Wofford in Lorain, Ohio, the second of four children in a working-class family.[1] As a child, Morrison read constantly; among her favorite authors were Jane Austen and Leo Tolstoy. Morrison's father, George Wofford, a welder by trade, told her numerous folktales of the Black community (a method of storytelling that would later work its way into Morrison's writings).

In 1949 Morrison entered Howard University to study English. While there she began going by the nickname of "Toni," which derives from her middle name, Anthony.[1][2] Morrison received a B.A. in English from Howard University in 1953, then earned a Master of Arts degree, also in English, from Cornell University in 1955, for which she wrote a thesis on suicide in the works of William Faulkner and Virginia Woolf.[3] After graduation, Morrison became an English instructor at Texas Southern University in Houston, Texas (from 1955-1957) then returned to Howard to teach English. She became a member of Alpha Kappa Alpha Sorority, Inc.

In 1958 she married Harold Morrison. They had two children, Harold and Slade, but divorced in 1964. After the divorce she moved to Syracuse, New York, where she worked as a textbook editor. Eighteen months later she went to work as an editor at the New York City headquarters of Random House.[3]

As an editor, Morrison played an important role in bringing African American literature into the mainstream. She edited books by such Black authors as Toni Cade Bambara, Angela Davis and Gayl Jones.

Morrison began writing fiction as part of an informal group of poets and writers at Howard University who met to discuss their work. She went to one meeting with a short story about a black girl who longed to have blue eyes. The story later evolved into her first novel, The Bluest Eye (1970), which she wrote while raising two children and teaching at Howard.[3]In 2000 it was chosen as a selection for Oprah's Book Club.[4]

In 1973 her novel Sula was nominated for the National Book Award. Her third novel, Song of Solomon (1977), brought her national attention. The book was a main selection of the Book-of-the-Month Club, the first novel by a Black writer to be so chosen since Richard Wright's Native Son in 1940. It won the National Book Critics Circle Award.

Her novel, Beloved, won the 1987 Pulitzer Prize. The novel is loosely based on the life and legal case of the slave Margaret Garner, about whom Morrison later wrote in the opera Margaret Garner (2005). The Book's Epigraph says: "Sixty Million and more." Morrison is referring to the estimated number of slaves who died in the slave trade. More specifically, she is referring to the Middle Passage.

A survey of eminent authors and critics conducted by The New York Times found Beloved the best work of American fiction of the past 25 years; it garnered 15 of 125 votes, finishing ahead of Don DeLillo's Underworld (11 votes), Cormac McCarthy's Blood Meridian (8) and John Updike's Rabbit series (8).[5] The results appeared in The New York Times Book Review on May 21, 2006.[6]

When the novel failed to win the National Book Award as well as the National Book Critics Circle Award, a number of writers protested the omission.[3][8] Beloved was adapted into the 1998 film of the same name starring Oprah Winfrey and Danny Glover. Morrison later used Margaret Garner's life story again in an opera, Margaret Garner, with music by Richard Danielpour.

Though based in the Creative Writing Program, Morrison did not regularly offer writing workshops to students after the late 1990s, a fact that earned her some criticism. Rather, she conceived and developed the prestigious Princeton Atelier, a program that brings together talented students with critically acclaimed, world-famous artists. Together the students and the artists produce works of art that are presented to the public after a semester of collaboration. In her position at Princeton, Morrison used her insights to encourage not merely new and emerging writers, but artists working to develop new forms of art through interdisciplinary play and cooperation.

Did you know?
Toni Morrison was the first African American woman to win the Nobel Prize in Literature

In 1993 Morrison was awarded the Nobel Prize in Literature, the first Black woman to win the award.[2] Her citation reads: Toni Morrison, "who in novels characterized by visionary force and poetic import, gives life to an essential aspect of American reality." Shortly afterwards, a fire destroyed her Rockland County, New York home.[1][9]

In November 2006, Morrison visited the Louvre Museum in Paris as the second in its Grand Invité program to guest-curate a month-long series of events across the arts on the theme of "The Foreigner's Home."

In May 2010, Morrison appeared at PEN World Voices for a conversation with Marlene van Niekerk and Kwame Anthony Appiah about South African literature, and specifically van Niekerk's 2004 novel Agaat.

Morrison wrote books for children with her younger son, Slade Morrison, who was a painter and a musician. Slade died of pancreatic cancer on December 22, 2010, aged 45.[10] Morrison's novel Home was half-completed when her son died. 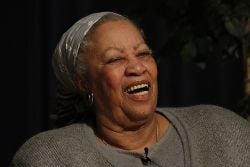 Morrison had stopped working on her latest novel when her son died. She said that afterward, "I stopped writing until I began to think, He would be really put out if he thought that he had caused me to stop. 'Please, Mom, I'm dead, could you keep going ...?'"[11]

She completed Home and dedicated it to her son Slade Morrison.[12] Published in 2012, it is the story of a Korean War veteran in the segregated United States of the 1950s, who tries to save his sister from brutal medical experiments at the hands of a white doctor.[11]

Morrison debuted another work in 2011: She worked with opera director Peter Sellars and Malian singer-songwriter Rokia Traoré on a new production, Desdemona, taking a fresh look at William Shakespeare's tragedy Othello. The trio focused on the relationship between Othello's wife Desdemona and her African nursemaid, Barbary, who is only briefly referenced in Shakespeare. The play, a mix of words, music and song, premiered in Vienna in 2011.[13]

In August 2012, Oberlin College became the home base of the Toni Morrison Society,[14] an international literary society founded in 1983, dedicated to scholarly research of Morrison's work.[15]

Morrison's eleventh novel, God Help the Child, was published in 2015. It follows Bride, an executive in the fashion and beauty industry whose mother tormented her as a child for being dark-skinned – a childhood trauma that has dogged Bride her whole life.[16]

Morrison died at Montefiore Medical Center in The Bronx, New York City on August 5, 2019, from complications of pneumonia. She was 88 years old.

Toni Morrison is one of a number of significant African-American writers who conveyed the experience of post-slavery, post-segregation blacks. She helped promote Black literature and authors when she worked as an editor for Random House in the 1960s and 1970s, later emerging herself as one of the most important African American writers of the twentieth century.

Although her novels typically concentrate on black women, Morrison did not identify her works as feminist. She stated that "it's off-putting to some readers, who may feel that I'm involved in writing some kind of feminist tract. I don't subscribe to patriarchy, and I don't think it should be substituted with matriarchy. I think it's a question of equitable access, and opening doors to all sorts of things."[17]

The Toni Morrison Papers are part of the permanent library collections of Princeton University|, where they are held in the Manuscripts Division, Department of Rare Books and Special Collections.

The National Memorial for Peace and Justice in Montgomery, Alabama, includes writing by Morrison.[18] Visitors can see her quote after they have walked through the section commemorating individual victims of lynching.

Morrison was the subject of a film titled Imagine — Toni Morrison Remembers, directed by Jill Nicholls and shown on BBC One television on July 15, 2015, in which Morrison talked to Alan Yentob about her life and work.

At its 1979 commencement ceremonies, Barnard College awarded her its highest honor, the Barnard Medal of Distinction. Oxford University awarded her an honorary Doctor of Letters degree in June 2005.

She was nominated for a Grammy Award in 2008 for Best Spoken Word Album for Children for Who's Got Game? The Ant or the Grasshopper? The Lion or the Mouse? Poppy or the Snake?

In May 2011, Morrison received an Honorable Doctor of Letters Degree from Rutgers University during commencement where she delivered a speech of the "pursuit of life, liberty, meaningfulness, integrity, and truth."

In March 2012, Morrison established a residency at Oberlin College. On May 29, 2012, President Barack Obama presented Morrison with the Presidential Medal of Freedom.

She won the Pulitzer Prize in 1988 for Beloved and the Nobel Prize in 1993. In May 2012, she was awarded the Presidential Medal of Freedom.

In 2016, she received the PEN/Saul Bellow Award for Achievement in American Fiction.

Retrieved from https://www.newworldencyclopedia.org/p/index.php?title=Toni_Morrison&oldid=1025072
Categories:
Hidden category:
This page was last edited on 20 September 2019, at 14:52.
Content is available under Creative Commons Attribution/Share-Alike License; additional terms may apply. See Terms of Use for details.