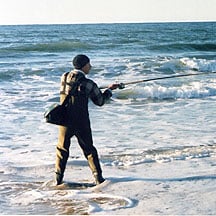 Surf fishing is the sport of catching fish while standing on the shoreline or wading in the surf. Surf fishing is a general term and may or may not include casting a lure or bait, and refers to all types of shore fishing—from sandy and rocky beaches, rock jetties, or even fishing piers. The terms surfcasting or beachcasting refer more specifically to surf fishing from the beach by casting into the surf at or near the shoreline. With a few exceptions, surf fishing is done in saltwater. Surf fishermen usually use a long fishing rod from twelve to sixteen feet and casting long distances with a long rod requires skill and experience. 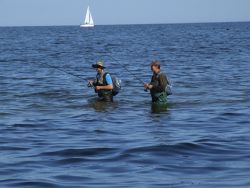 The basic idea of most surfcasting is to cast bait or a lure as far out into the water as is necessary to reach the targeted fish. Basic surf fishing can be done with a fishing rod measuring between seven and twelve feet long, with an extended butt section, equipped with a suitably-sized spinning or conventional casting fishing reel. In addition to rod and reel, surf fisherman need terminal tackle and bait. Terminal tackle is the equipment at the end of the line: Hooks, swivels, lines, and leaders. Bait can be live or a lure. 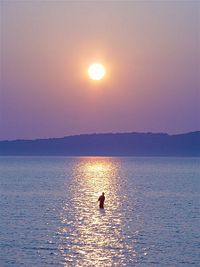 Dedicated surfcasters usually possess an array of terminal and other tackle, with fishing rods and reels of differing lengths and actions, and lures and baits of various weights and capabilities. Depending on fishing conditions and the type of fish they are trying to catch, surfcasters tailor bait, terminal tackle, rod, and reel to their needs. Reels and other equipment must be able to resist the corrosive and abrasive effects of salt and sand.

Surf fishermen also use artificial lures. There are hundreds of different lures that are effective for surf fishing, such as spoons, plugs, soft plastics, and jigs. Most can be purchased from local bait and tackle shops, online tackle retailers, and at fishing tackle expositions or specialized surf fishing catalogs. Most surfcasters carry with them a “surf bag” which holds a selection of lures to help facilitate rapid changes of lures appropriate to current fishing conditions, saving trips back to the beach or vehicle to change equipment.

Several other items are commonly used by surf fisherman and surfcasters to improve comfort, convenience, and effectiveness. Among these are waders, used to wade out into the surf to gain distance from shore when casting the bait. Full length, chest-high waders are most popular for protection against a pounding surf that could easily swamp hip-length wading boots. In addition to the extra reach provided by wading out from shore, waders provide improved footing, protection for feet and legs from sharp bottom objects and stinging/biting fish and crustaceans, and protection from cold water temperature. Most surf fishermen prefer integrated booted waders to stocking-foot models, which prevents sand and rocks from finding their way into a boot. In areas where the beach bottom consists of slippery rocks or when fishing from mossy and slimy rock jetties, cleated boots or sandals (Korkers) are utilized to improve footing and enhance safety.

Surf fishing is often done at night, in the dark, to coincide with the nocturnal feeding habits of many target species. Many surf fishermen add items such as flashlights, headlamps, light sticks and other gear to facilitate night fishing.

Surfcasting is a casting technique which separates the surfcaster from the ordinary pier or boat fisherman. Specialized, two-handed casting techniques are used to cast the lure or bait the added distances required in many cases to reach feeding inshore fish. In these casts the entire body, rather than just the arms, are utilized to deliver the cast. In addition to standard two-handed casts, veteran surfcasters may also resort to the pendulum cast (derived from tournament casting contests) to achieve added distance—in some cases exceeding 700 feet. One of common forms of tackle for striped bass is a 3 ounce lead weight (sinker) attached by a brass swivel to the end of 20-25 lb test line. Two to 6 leaders with bass hooks are then attached approximately 12 inches apart starting from the weight and working back up the line. The weight and tackle are then baited and cast into the surf. A strain is then held on the line lifting the bait within the feeding zone. There are certainly varieties of ways of fishing and fisherman tries and tests what works best at each occasion.

In some countries such as Britain, surfcasting is often called beachcasting. It is a popular form of fishing which is carried out all around the coast of the British Isles. Beachcasters use very long fishing rods, usually between 12 and 16 feet. The beachcaster will stand on a beach or shoreline and cast out to sea with either a water filled float, or a lead weight weighing between 120 g (4.2 ounce) and 200 g (7 ounce). Bait used in this form of fishing might include limpets, mussels, lugworm, ragworm, sandeel, mackerel strip, squid, peeler crab or razor fish. Additionally, artificial flies or even spinners may be used for species such as mackerel or bass. It is a common pastime in coastal areas of Scotland, England, Wales and Ireland and often results in the capture of large specimens of many species of fish, including: Flatfish, bass, cod, whiting, pollack, black bream, dogfish, smooth hound, bull huss, rays, and tope.

Surf fishing from a rocky beach

When fishing from a rocky beach, fishermen sometimes use shrimp, small bait fish, and other species for bait; in addition, some fishermen also use chumming. For example, in Japan, Isozuri (Rocky beach fishing) fishermen commonly use a chumming technique that is adjusted to the tide and water current. However, chumming is prohibited by law in some places because it may attract sharks.

Unlike boat fishing, fishermen cannot easily move around and change locations. Selection of the fishing spot is, therefore, crucial. When the best spot is located on an inaccessible rocky beach or uninhabited island, fishermen sometimes arrange boating services.

Slippery rocky beach fishing at night is quite dangerous. Fishermen have to carefully watch weather conditions such as wind and rain.

As with any water sport care must be taken to participate safely in this sport. Much surf fishing is done in rough whitewater surf conditions. Powerful waves and strong undertows can cause serious injury or death if proper attention is not paid to safety.

Areas fished should be scouted in low tide conditions to note sudden drop offs or dangerous conditions hidden at high tides. Any fisherman with waders should wear a wader belt to keep waders from filling with water in the event one falls in the surf. The aforementioned cleats should be worn anywhere there are slippery rocks or shells underfoot. PFD's (personal flotation devices) should be considered especially when fishing alone in big surf or on jetties.

Since lures and hooks have razor sharp points, care must be taken not to hook oneself or others when casting, especially when performing two-handed full power casts that require a substantial amount of space behind the surfcaster. In the event that one accidentally hooks oneself or someone else, it is a good idea to carry a pair of good quality pliers.

A wide array of species can be targeted from surf and shore, including sharks. In the U.S., the striped bass is highly valued. This species can be fished from shore and ranges in weight from a few pounds to the world record 78.5 lb (35.6 kg), 53 inches. The world record striped bass was caught by a surf fisherman on Vermont Ave Jetty, Atlantic City, New Jersey, on September 21, 1982. Fish in the 30 to 40 lb (15 kg) range are common on the northeast US coast. Some other available species are bluefish, redfish (red drum), black drum, tautog (blackfish), flounder (fluke), weakfish (sea trout), bonito, and albacore tuna, pompano, Spanish mackerel, snook and tarpon.

Many areas allow four-wheel-drive (4WD) vehicles on to the beach. This allows the surf fisherman to scout and fish large stretches of shoreline. Although the term "beach buggy" may be applied to special vehicles for transportation on sand, 4x4 trucks and SUV's with deflated tires are more often used in surf fishing. Permits are usually required and need to be obtained from the appropriate state or local authorities. Most require an additional list of safety and other equipment, sometimes called Beach Permit Kits to insure that the vehicle and its inhabitants can safely navigate the soft sand and are prepared in the event the vehicle gets stuck. Beach Buggy access can be hindered at times by beach closures, due to endangered bird species nesting. Beach buggy access is often hotly contested between environmental groups, and beach access enthusiasts. Therefore it is important to check on local regulations before anglers attempt to drive their vehicle on the beach. Driving in restricted areas can result in serious penalties.