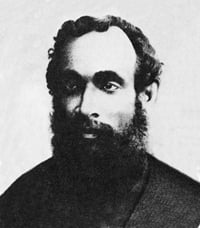 Banerjee was the second Indian to pass the Indian Civil Service examinations, and was appointed to a post in Sylhet in his homeland; however, in 1874 he was dismissed for a minor and apparently inadvertent procedural error. His efforts at reinstatement failed, and as a dismissed civil servant he was also refused admission to the bar. Banerjee felt he had been discriminated against because he was Indian. He embarked on a political career to organize Indian public opinion, to redress wrongs and protect rights, and to give Indians a serious role in the administration of their country and a voice in the counsels of their government.

Banerjee was a believer in moderate means of political agitation, meetings, petitions, and legislative action. A social and religious reformer, Banerjee advocated widow remarriage and raising the marriageable age of girls. His grasp of the English language and his skills as an orator and debater made him an outstanding public speaker and a master parliamentarian. Banerjee was knighted by the British in 1921. His moderate stance caused him to lose popularity, and he was defeated at the polls in 1923.

Surendranath Banerjee was born November 10, 1848, in Calcutta, in the province of Bengal, to a kulin Brahmin Hindu family. He was the second son of Dr. Durga Charan Banerjee in Taltala, who deeply influenced him with his liberal, progressive thinking. Banerjee was educated at the Parental Academic Institution and at the Hindu College. After graduating from the University of Calcutta (Dovetan College) with a degree in English literature, he traveled to England in 1868, along with Romesh Chunder Dutt and Behari Lal Gupta to sit for the Indian Civil Service examinations. He cleared the exam with flying colors in 1869, but was barred owing to a dispute over his exact age. After clearing the matter in the courts, Banerjee cleared the exam again in 1871. He was the second Indian to succeed in the Indian civil service competitive examination. He was first appointed as Assistance Magistrate in Sylhet (now in Bangladesh). In 1874, he was dismissed for a minor and apparently inadvertent procedural error. As a dismissed civil servant he was also refused admission to the bar. Banerjee felt he had been discriminated against because he was Indian, and went to England to protest this decision, but was unsuccessful. During his stay in England (1874-1875) he studied the works of Edmund Burke and other liberal philosophers.

As a teacher, he inspired his students with a new spirit of nascent Indian nationalism. He began delivering public speeches on nationalist and liberal political subjects, as well as Indian history, such as 'Indian unity', 'life and thought of Mazzini' and 'the history of Shivaji and the Sikhs.' His eloquence made an impact on the Indian mind, which had already been stirred by the early nineteenth-century socio-religious reform movements, but Banerjee now directed their attention to political regeneration.

He founded the Indian National Association, the first Indian political organization of its kind, on July 26, 1876. He used the organization to tackle the issue of age-limit for Indian students appearing for Indian Civil Service exams, a common grievance among Indian intellectuals. He condemned the racial discrimination perpetrated by British officials in India through speeches all over the country, which made him very popular. In 1878, he founded the English-language newspaper, The Bengali, through which he espoused liberal causes for nearly half a century.

When Banerjee was arrested for publishing remarks in contempt of court, protests and hartals erupted across Bengal, and in Indian cities such as Agra, Faizabad, Amritsar, Lahore and Pune. Released from prison, Banerjee initated a movement for creation of a "National Fund" which was established at a meeting on July 17, 1883, to secure and expose the cause of political freedom in India through constitutional means. The Indian National Association expanded considerably, and hundreds of delegates from across India came to attend its annual conferences in Calcutta. Banerjee played a prominent role in the Indian National Congress from the time of its founding in 1885 in Bombay. Banerjee merged his organization with the INC, owing to their common objectives and memberships. He served as Congress President in 1895 and 1902.

Banerjee was a believer in moderate means of political agitation, meetings, petitions, and legislative action. A social and religious reformer, Banerjee advocated widow remarriage and raising the marriageable age of girls. His grasp of the English language and his skills as an orator and debater made him an outstanding public speaker and a master parliamentarian. Banerjee was one of the most important public leaders to protest the partition of the Bengal province in 1905. Banerjee was at the front of organizing protests, petitions and extensive public support across Bengal and India, which finally compelled the British to reverse the bifurcation in 1912. Banerjee became the patron of rising Indian leaders like Gopal Krishna Gokhale and Sarojini Naidu. He was also one of the senior leaders of the "moderate" Congress, those who favored accommodation and dialog with the British, after the "extremists," (those who advocated revolution and political independence) led by Bal Gangadhar Tilak, left the party in 1906. Banerjee was an important figure in the Swadeshi movement, advocating goods manufactured in India against foreign products, and his popularity at its apex made him, in words of admirers, the "uncrowned king of Bengal."

The declining popularity of moderate Indian politicians affected Banerjee's role in Indian politics. Banerjee supported the 1909 Minto-Morley reforms, which were resented and ridiculed as insufficient and meaningless by nationalist politicians and the vast majority of the Indian public. Banerjee was a critic of the proposed method of civil disobedience advocated by Mohandas Gandhi, the rising popular leader of Indian nationalists and the Congress Party. Banerjee saw the Montagu-Chelmsford reforms of 1919 as substantially fulfilling Congress's demands, a position which further isolated him. He was elected to the reformed Legislative Council of Bengal in 1921, and knighted in the same year for his political support of the Empire. His acceptance of the portfolio of Minister in the Bengal government earned him the ire of nationalists and much of the public, and he lost the election to the Bengal Legislative Assembly in 1923, ending his political career for all practical purposes. While serving as a minister in the Bengal government, Banerjee made the Calcutta Municipal Corporation a more democratic body.

Banerjee died at Barrackpore on August 6, 1925.

Banerjee is remembered and widely respected today as a pioneer leader of Indian politics, one of the first to tread the path for Indian political empowerment. His book, A Nation In Making (1925), was widely acclaimed.

The British respected him and referred to him during his later years as "Surrender Not" Banerjee.

“Dignity, elevation, lucid exposition of complicated facts, sustained and fiery declamations, impassioned apostrophes, the power to touch the emotions making the hearers laugh and weep as occasion may demand rallying battle-cries, and the thunderbolt of invective, and not merely meek-spirited, dull, prosy sermons. Such was the soaring eloquence of Surendranath Banerjee. Dr. Sachidananda Sinha (1871-1950), paying his tribute to the eloquence of Surendranath Banerjee, whom he knew very intimately.[1]

Retrieved from https://www.newworldencyclopedia.org/p/index.php?title=Surendranath_Banerjee&oldid=982090
Categories:
Hidden category:
This page was last edited on 30 May 2014, at 20:54.
Content is available under Creative Commons Attribution/Share-Alike License; additional terms may apply. See Terms of Use for details.