Satyagraha (Sanskrit, meaning "Truth-force") was a term coined by Mahatma Gandhi to express his philosophy that non-violence is a power that can transform adversaries into friends and resolve issues of injustice and oppression. Gandhi developed this philosophy in his struggles against racial discrimination in South Africa and eventually employed satyagraha tactics against British rule in India during his campaign for Indian independence. His insistence on absolute non-violence as the power of truth won him international recognition for his peaceful way of dealing with conflicts.

Gandhi's philosophy of satyagraha also had a profound impact on the thinking of Martin Luther King, Jr. during the Civil Rights Movement in North America during the 1960s.

The word "satyagraha" utilizes words that derive from the Sanskrit language: Satya is the Sanskrit word for “truth” and agraha means "to grasp or hold." These two words compounded mean “grasping/holding the truth.” Gandhi, himself, explains the origins of this term as follows:

None of us knew what name to give to our movement. I then used the term “passive resistance” in describing it. …As the struggle advanced, the phrase “passive resistance” gave rise to confusion and it appeared shameful to permit this great struggle to be known only by an English name. Again, that foreign phrase could hardly pass as current coin among the community. A small prize was therefore announced in Indian Opinion to be awarded to the reader who invented the best designation for our struggle. We thus received a number of suggestions. … Shri Maganlal Gandhi was one of the competitors and he suggested the word sadagraha, meaning “firmness in a good cause.” I liked the word, but it did not fully represent the whole idea I wished it to connote. I therefore corrected it to “satyagraha.” Truth (satya) implies love, and firmness (agraha) engenders and therefore serves as a synonym for force. I thus began to call the Indian movement Satyagraha, that is to say, the Force which is born of Truth and Love or non-violence…[1]

Gandhi first used the term "Satyagraha" in South Africa to describe his philosophy of active non-violent resistance as opposed to "passive resistance." In developing his practical method of satyagraha, Gandhi was influenced by the concept of ahimsa found in the tenets of Jainism, as well as Jesus' Sermon on the Mount, Leo Tolstoy's The Kingdom of God is Within You, John Ruskin's book, Unto This Last, and Henry David Thoreau's Civil Disobedience.[2]

Its root meaning is holding onto truth, hence truth-force. I have also called it love-force or soul-force. In the application of satyagraha, I discovered in the earliest stages that pursuit of truth did not admit of violence being inflicted on one’s opponent but that he must be weaned from error by patience and sympathy. For what appears to be truth to the one may appear to be error to the other. And patience means self-suffering. So the doctrine came to mean vindication of truth, not by infliction of suffering on the opponent, but on oneself.[3]

In traditional violent and non-violent conflict, the goal is to defeat the opponent or frustrate the opponent’s objectives, or to meet one’s own objectives despite the efforts of the opponent to obstruct these. In satyagraha, by contrast, these are not the goals. “The Satyagrahi’s object is to convert, not to coerce, the wrong-doer.”[4] Success is defined as cooperating with the opponent to meet a just end that the opponent is unwittingly obstructing. The opponent must be converted, at least as far as to stop obstructing the just end, for this cooperation to take place.

The theory of satyagraha sees means and ends as inseparable. The means used to obtain an end are wrapped up and attached to that end. Therefore, it is contradictory to try to use unjust means to obtain justice or to try to use violence to obtain peace. As Gandhi wrote: “They say, 'means are, after all, means.' I would say, 'means are, after all, everything.' As the means so the end…”[5]

Gandhi rejected the idea that injustice should, or even could, be fought against “by any means necessary”—the use of violent, coercive, unjust means, produces resulted that will necessarily embed that injustice. To those who preached violence and called non-violent actionists cowards, he replied: “I do believe that, where there is only a choice between cowardice and violence, I would advise violence…. I would rather have India resort to arms in order to defend her honor than that she should, in a cowardly manner, become or remain a helpless witness to her own dishonour…. But I believe that non-violence is infinitely superior to violence, forgiveness is more manly than punishment.”[6]

The essence of satyagraha is that it seeks to eliminate antagonisms without harming the antagonists themselves, as opposed to violent resistance, which is meant to cause harm to the antagonist. A satyagrahi, therefore, does not seek to end or destroy the relationship with the antagonist, but instead seeks to transform or “purify” it to a higher level. A euphemism sometimes used for satyagraha is that it is a “silent force” or a “soul force” (a term also used by Martin Luther King Jr. during his famous “I Have a Dream” speech). It arms the individual with moral power rather than physical power. Satyagraha is also termed a “universal force,” as it essentially “makes no distinction between kinsmen and strangers, young and old, man and woman, friend and foe.”[7]

Gandhi contrasted satyagraha (holding on to truth) with duragraha (holding on by force), as in protest meant more to harass than enlighten opponents. He wrote: “There must be no impatience, no barbarity, no insolence, no undue pressure. If we want to cultivate a true spirit of democracy, we cannot afford to be intolerant. Intolerance betrays want of faith in one's cause.”[8] 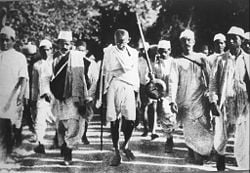 Gandhi leading the Salt March, a notable example of Satyagraha.

When using satyagraha in a large-scale political conflict involving civil disobedience, Gandhi believed that the satyagrahis must undergo training to ensure discipline. He wrote that “only when a people have proved their active loyalty by obeying the many laws of the State that they acquire the right of Civil Disobedience.”[10]

He therefore made part of the discipline that satyagrahis:

This obedience has to be not merely grudging, but extraordinary:

…an honest, respectable man will not suddenly take to stealing whether there is a law against stealing or not, but this very man will not feel any remorse for failure to observe the rule about carrying headlights on bicycles after dark.… But he would observe any obligatory rule of this kind, if only to escape the inconvenience of facing a prosecution for a breach of the rule. Such compliance is not, however, the willing and spontaneous obedience that is required of a Satyagrahi.[12]

Gandhi envisioned satyagraha as not only a tactic to be used in acute political struggle, but as a universal solvent for injustice and harm. He felt that it was equally applicable to large-scale political struggle and to one-on-one interpersonal conflicts and that it should be taught to everyone.[13]

He founded the Sabarmati Ashram to teach satyagraha. He asked satyagrahis to follow the following principles:[14]

On another occasion, he listed seven rules as “essential for every Satyagrahi in India”:[15]

Gandhi proposed a series of rules for satyagrahis to follow in a resistance campaign:[7]

Gandhi's writings on Nazi persecution of the Jews in Germany were controversial. He offered Satyagraha non-violence as a method of combating oppression and genocide, stating:

If I were a Jew and were born in Germany and earned my livelihood there, I would claim Germany as my home even as the tallest Gentile German might, and challenge him to shoot me or cast me in the dungeon; I would refuse to be expelled or to submit to discriminating treatment. And for doing this I should not wait for the fellow Jews to join me in civil resistance, but would have confidence that in the end the rest were bound to follow my example. If one Jew or all the Jews were to accept the prescription here offered, he or they cannot be worse off than now. And suffering voluntarily undergone will bring them an inner strength and joy […] the calculated violence of Hitler may even result in a general massacre of the Jews by way of his first answer to the declaration of such hostilities. But if the Jewish mind could be prepared for voluntary suffering, even the massacre I have imagined could be turned into a day of thanksgiving and joy that Jehovah had wrought deliverance of the race even at the hands of the tyrant. For to the God-fearing, death has no terror.[16]

Gandhi was highly criticized for these statements and responded in another article entitled “Some Questions Answered” where he wrote:

Friends have sent me two newspaper cuttings criticizing my appeal to the Jews. The two critics suggest that in presenting non-violence to the Jews as a remedy against the wrong done to them, I have suggested nothing new… What I have pleaded for is renunciation of violence of the heart and consequent active exercise of the force generated by the great renunciation.[17]

In a similar vein, anticipating a possible attack on India by Japan during World War II, Gandhi recommended satyagraha as a defense:

…there should be unadulterated non-violent non-cooperation, and if the whole of India responded and unanimously offered it, I should show that, without shedding a single drop of blood, Japanese arms—or any combination of arms—can be sterilized. That involves the determination of India not to give quarter on any point whatsoever and to be ready to risk loss of several million lives. But I would consider that cost very cheap and victory won at that cost glorious. That India may not be ready to pay that price may be true. I hope it is not true, but some such price must be paid by any country that wants to retain its independence. After all, the sacrifice made by the Russians and the Chinese is enormous, and they are ready to risk all. The same could be said of the other countries also, whether aggressors or defenders. The cost is enormous. Therefore, in the non-violent technique I am asking India to risk no more than other countries are risking and which India would have to risk even if she offered armed resistance.[18]