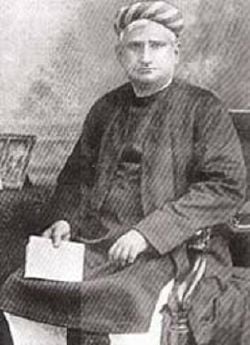 Bankim Chandra Chattopadhyay (June 26, 1838 - April 8, 1894) (Bengali: বঙ্কিম চন্দ্র চট্টোপাধ্যায় Bôngkim Chôndro Chôţţopaddhae) ("Chattopadhyay" in the original Bengali; "Chatterjee" as spelt by the British) was a Bengali poet, novelist, essayist, and journalist, most famous as the author of Vande Mataram or Bande Mataram, which inspired the freedom fighters of India, and was later declared the National Song of India. Born into the family of a government official under the British rule of India, he was one of the first two graduates of the University of Calcutta and later obtained a degree in law. He worked in government service for twenty years, often coming into conflict with the authorities. He published his first novel, Kapalkundala, in 1866, and went on to publish more than seventeen romances, historical novels, and essays, as well as several literary journals.

A religious reformer, Chattopadhyay believed that true reform could only be achieved through an internal reform of Hinduism, and strove to lay the foundations for a spiritual revival of Bengal. His writings awakened in the Bengalis a spirit of self-confidence and pride in their religion and history. He is widely regarded as the “father of the modern novel in India,” because his works established the novel as a major literary form in India.

Bankim Chandra Chattopadhyay was born June 26, 1838, in the village of Kanthalpura in Naihati, the youngest of three brothers, to Yadav (or Jadab) Chandra Chattopadhyaya and Durgadebi. His family was orthodox, and his father was a government official who went on to become the Deputy Collector of Midnapur. One of his brothers, Sanjeeb Chandra Chatterjee, was a novelist and is known for his book, Palamau. He was educated at the Mohsin College in Hooghly[1] and later at the Presidency College, graduating with a degree in Arts in 1857. He later obtained a degree in law, in 1869.

Appointed Deputy Collector, like his father, Chatterjee went on to become a Deputy Magistrate, retiring from government service in 1891. His years at work were peppered with incidents that brought him into conflict with the ruling British of the time. However, he was made a Companion, Order of the Indian Empire, in 1894.

He first married at the young age of eleven; his first wife died in 1859. He later married Rajalakshmi Devi. They had three daughters.

Bankim is widely regarded as the “father of modern novel in India.” He was not the first to write historical and social novels in Bengali, but he established the novel as a major literary genre in India.[2] Chattopadhyay, following the model of Ishwarchandra Gupta, began his literary career as a writer of verse. He soon realized, however, that his talents lay in other directions, and turned to fiction. His first attempt was a novel in Bengali submitted for a contest. He did not win the prize, and the novelette was never published. His first fiction to appear in print was Rajmohan's Wife. It was written in English and was probably a translation of the novelette submitted for the contest. Durgeshnondini, his first Bengali romance and the first-ever novel in Bengali, was published in 1865.

Kapalkundala (1866) was Chattopadhyay's first major publication. The heroine of this novel, named after the mendicant woman in Bhavabhuti's Malatimadhava, is modeled partly after Kalidasa's Shakuntala and partly after Shakespeare's Miranda. He chose Dariapur in Contai Subdivision as the background of this famous novel.

His next romance, Mrinalini (1869), marks his first attempt to set his story against a larger historical context. This book marks the shift from Chatterjee's early career, in which he was strictly a writer of romances, to a later period in which he aimed to simulate the intellect of the Bengali-speaking people and bring about a cultural revival, through a campaign to improve Bengali literature. He began publishing a monthly literary magazine Bangodarshan in April 1872, the first edition of which was filled almost entirely with his own work. The magazine carried serialized novels, stories, humorous sketches, historical and miscellaneous essays, informative articles, religious discourses, literary criticisms, and reviews. Vishabriksha (The Poison Tree, 1873) was the first novel of Chattopadhyay's to appear serially in Bangodarshan.

Bangodarshan went out of circulation after four years. It was later revived by his brother, Sanjeeb Chandra Chattopadhyay.

Chattopadhyay's next major novel was Chandrasekhar (1877), which contains two largely unrelated parallel plots. Although the scene is once again shifted back to eighteenth century, the novel is not historical. His next novel, Rajani (1877), followed the autobiographical technique of Wilkie Collins' A Woman in White. The title role, a blind girl, was modeled after Edward Bulwer-Lytton's Nydia in The Last Days of Pompeii. Krishnakanter Uil (Krishnakanta's Will, 1878) was Chattopadhyay’s closest approximation to a Western novel. The plot is somewhat similar to that of Poison Tree.

The only novel of Chattopadhyay's that can truly be considered historical fiction is Rajsimha (1881, rewritten and enlarged 1893). Anandamath (The Mission House of Felicity, 1882) is a political novel which depicts a Sannyasi (Brahmin ascetic) army fighting Indian Muslims who are in the employ of the East India Company. The book calls for the rise of Brahmin/Hindu nationalism but, ironically, concludes with a character accepting the British Empire as a necessity. The novel was also the source of the song, "Vande Mataram" ("I Worship the Mother"), which, set to music by Rabindranath Tagore, was taken up by many secular nationalists. The novel is loosely based on the time of the Sannyasi Rebellion; however, in the actual rebellion, Hindus sannyasis and Muslim fakirs both rebelled against the British East India Company. The novel first appeared in serial form in Bangadarshan.

Chattopadhyay's next novel, Devi Chaudhurani, was published in 1884. His final novel, Sitaram (1886), tells the story of a Hindu chief rebelling against Muslim rule.

Chattopadhyay's humorous sketches are his best known works other than his novels. Kamalakanter Daptar (From the Desk of Kamalakanta, 1875; enlarged as Kamalakanta, 1885) contains half-humorous and half-serious sketches, somewhat on the model of De Quincey's Confessions of an English Opium-Eater.

Some critics, like Pramathnath Bishi, consider Chattopadhyay as the best novelist in Bangla literature. They believe that few writers in world literature have excelled in both philosophy and art as Bankim has done. They argue that in a colonized nation, Bankim could not overlook politics. He was one of the first intellectuals who wrote in a British colony, accepting and rejecting the status at the same time. Bishi also rejects the division of Bankim in to "Bankim the artist" and "Bankim the moralist," saying that Bankim must be read as a whole, and that the artist in Bankim cannot be understood unless he is understood as a moralist and vice versa.

Bankim was a religious nationalist, who observed that Bengal had become divided between traditionalist orthodox reformers, who were slaves to rigid tradition, and the progressive reformers, who were blindly emulating the West. He believed that real reform could only be achieved by changing the national character through an internal reform of Hinduism. During the last part of his career, Bankim attempted, through his writing, to lay a religious foundation for the revival of Bengal as a strong and independent state. He inspired in his readers, first the middle class and later the general public, a new self-confidence and pride in their religion and in their historical heroes, as portrayed in Bankim’s novels.[3]

Retrieved from https://www.newworldencyclopedia.org/p/index.php?title=Bankim_Chandra_Chattopadhyay&oldid=1094813
Categories:
Hidden category:
This page was last edited on 11 January 2023, at 04:35.
Content is available under Creative Commons Attribution/Share-Alike License; additional terms may apply. See Terms of Use for details.