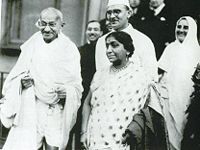 Sarojini Naidu, (center) is seen here with Mahatma Gandhi (left) in London (1931). Mahadev Desai stands behind her, and Mirabehn (Admiral Slade's daughter) to the right.

Sarojini Naidu (February 13, 1879 – March 2, 1949), known as Bharatiya Kokila (The Nightingale of India), was a child prodigy, freedom fighter, and poet. Naidu was the first Indian woman to become the President of the Indian National Congress and the first woman to become the governor of an Indian state, the large state of Uttar Pradesh (fourth largest in India). As such, she led the way for women in Indian politics although her name is not as widely known as that of India's female Prime Minister, Indira Gandhi. In 1925, when she headed a very large political organization in India, no European woman (apart from Annie Besant, the first woman President of the Congress) had held a similar position of leadership. She was active in the Indian Independence Movement, joining Mahatma Gandhi in the Salt March to Dandi, and then leading the Dharasana Satyagraha after the arrests of Gandhi, Abbas Tyabji, and Kasturba Gandhi. She took part in several delegations to visit the British authorities, three times in London where she was with Gandhi at the Round Table Talks in 1931. She also visited Africa and the USA promoting India's independence struggle. She was also a wife and a mother. Her birthday is celebrated as "Women’s Day" in India.[1] She is remembered as a champion of women's rights, of Hindu-Muslim unity (writing a biography of Muhammad Jinnah) and as a close colleague and friend of M. K. Gandhi.

Sarojini Naidu was born in Hyderabad, India as the eldest daughter of scientist, philosopher, and educator Aghornath Chattopadhyaya, and Varada Sundari Devi, a Bengali poetess. Her father was the founder of the Nizam College, Hyderabad and also the first member of the Indian National Congress in Hyderabad with his friend Mulla Abdul Qayyum. Chattopadhyaya's family heritage was of the Brahman class, originally from Bengal. He was later dismissed from his position as Principal and even banished in retaliation for his political activities. Sarojini Naidu learned to speak Urdu, Telugu, English, Persian and Bengali. Her favorite poet was P.B. Shelley.

She attained national fame for entering Madras University at the age of twelve. At sixteen, she traveled to England to study first at King's College London and subsequently at Girton College, Cambridge. While in England, she identified with the Suffragette movement. Also in England, she was encouraged by the poets Arthur Simon and Edmond Gausse to explore Indian themes in her writing, such as India's landscape, her temples and her people. Her first book of poetry, The Golden Threshold, appeared in 1905. Other volumes followed. Her poems featured everyday scenes of Indian life, often drawn from the streets and markets, thus snake charmers and beggars and bangle sellers populate her poetry. It was in 1905 that she joined the Indian National Congress in protest over the Partition of Benga.[2] She was a strong supporter of women's rights, a champion of education for all and of Hindu-Muslim unity.

In the Freedom struggle 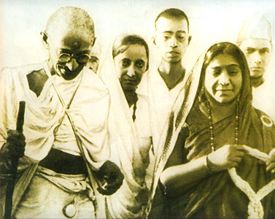 She joined the Indian independence movement, in the wake of the aftermath of partition of Bengal in 1905. During 1903-17 Sarojini came into contact with Gopal Krishna Gokhale, Rabindranath Tagore, Muhammad Ali Jinnah, Annie Besant, C. P. Ramaswami Iyer, Mohandas Gandhi and Jawaharlal Nehru.

From 1915 to 1918 she lectured all over India on welfare of youth, dignity of labour, women's emancipation and nationalism. She helped to establish the Women's Indian Association (WIA) (1917) to campaign for the female franchise. That year, on December 15, she led a delegation of women to meet the British Secretary of State for India who was visiting India, demanding women's rights and the vote. Women, the delegation told the Minister, were awakening to their civic responsibilities. She spoke on women's rights at the special session of the Indian National Congress which met in Bombay in August, 1918. In May, 1918 she accompanied Annie Besant, President of the WIA, to present the case for the women's vote to the Joint Select Committee considering Indian constitutional reforms in London, where they told the MPs that Indian women were "strong and united and ready to reform society."

After meeting Jawaharlal Nehru in 1916, she also took up the cause of the indigo workers of chappel head.

In March 1919, the British government passed the Rowlatt Act by which the possession of seditious documents was deemed illegal. Mohandas Gandhi organized the Non-Cooperation Movement to protest and Naidu was the first to join the movement which the government worked to suppress.

In July 1919, Naidu became the Home Rule League's ambassador to England where the Government of India Act (1919) was being passed, which did create an Legislative Assembly but with a small membership of 93 elected delegates (with 42 appointed and an upper house of 34 elected and 26 appointed members). It did not grant women the vote. In July 1920 she returned to India and on August 1 Mahatma Gandhi declared the Non-Cooperation Movement. In January 1924, she was one of the two Indian National Congress delegates at the East African Indian Congress. She traveled in East and South Africa as an advocate of the needs of the scattered Indian communities.

President of the Congress

In 1925 Naidu was elected as the first Indian woman to serve as President of the Indian National Congress, eight years after Anie Bessant had been elected. This was a powerful position. It is doubtful if any other woman has achieved such an important political post at this point, apart from regnant Queens.

Naidu visited New York in October 1928 to promote the cause of India's independence. While there, she also expressed concern regarding the unjust treatment of the African-Americans and the Amerindians. Upon her return to India she became a member of Congress Working Committee.

On January 26, 1930, the National Congress proclaimed its independence from the British Empire. On May 5, Mohandas Gandhi was arrested. Naidu was arrested shortly thereafter and was in jail for several months. She, along with Gandhi, was released on January 31, 1931. Later that year, they were again arrested. Naidu was eventually released due to her poor health and Gandhi was released in 1933. In 1931, she participated in the Round Table Summit in London, along with Gandhiji and Pundit Malaviyaji. In 1942, she was arrested during the "Quit India" protest and stayed in jail for 21 months with Gandhiji. Naidu shared a warm relationship with Mohandas Gandhi, even calling him "Mickey Mouse."

At the Asian Relations Conference of March 1947, Naidu presided over the Steering Committee.

On August 15, 1947, with the independence of India, Naidu became the Governor of Uttar Pradesh, India's first woman governor and she died in office in 1949.

In 1905, the first volume of her collection of poems was published as The Golden Threshold. Two more volumes were published: The Bird of Time (1912) and The Broken Wing in (1917).

Her poetry had beautiful words that could also be sung. Her collection of poems. Later, “The Magic of Sring,”[3] “Silver Tears,”[4] and “The Feather of the Dawn”[5] among others were published.

Naidu said, "When there is oppression, the only self-respecting thing is to rise and say this shall cease today, because my right is justice." Naidu adds, "If you are stronger, you have to help the weaker boy or girl both in play and in the work."[7]

In 1916, Naidu published the first biography of Muhammad Ali Jinnah, Muhammad Jinnah: An Ambassador of Unity.

Naidu's election as first woman leader of the Indian National Congress and as the first Governor of a state pioneered women's entry into Indian politics. Subsequently, India has had a woman Prime Minister and a woman President. Her role in the freedom struggle may have been less important than that of M. K. Gandhi, who in many respects was her mentor but her leadership of the movement during the Mahatmas’ imprisonment represents a far from insignificant contribution. She is remembered, too, for her sense of humor once famously commenting that it "cost a lot to keep Gandhi poor" and was well-known for calling herself a "Governess."[2] Several of her books are still in print. The Hunger Project has an annual essay prize for best journalistic reporting on women in local democracy in her honor.[8] There is a Sarojini Naidu Centre for Women Studies at the Jamia Millia Islamia in Delhi and a Sarojini Naidu Centre for Women's Studies at the Dr. D. Swaminadhan Research Foundation in Hyderabad, both named in her honor. According to Encyclopedia Britannica, she is "judged by many the greatest" of Indian "women poets."[9]

At the age of 17, while still in England, she met Dr. Muthyala Govindarajulu Naidu and fell in love with him. He was from Andhra Pradesh. Her marriage was a very happy one. They were married in Madras in 1898. They had four children: Jayasurya, Padmaja, Randheer, and Leelamani. Despite the fact that Govindarajulu was a non-Brahman, her parents were happy to bless the marriage (rare at this time).

Naidu's brother, Virendranath Chattopadhyaya, was also a noted Indian activist. During World War I Virendranath was instrumental in founding the Berlin Committee and was one of the leading figures of the Hindu German Conspiracy, a plot to ferment an anti-British, pro German revolt in India. He later became committed to Communism, traveling to Soviet Russia where he is believed to have been executed on Joseph Stalin's orders in 1937. Another brother, Harindranath, was an actor.

Retrieved from https://www.newworldencyclopedia.org/p/index.php?title=Sarojini_Naidu&oldid=1092667
Categories:
Hidden category:
This page was last edited on 23 December 2022, at 03:29.
Content is available under Creative Commons Attribution/Share-Alike License; additional terms may apply. See Terms of Use for details.