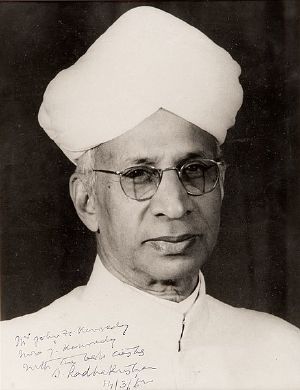 Radhakrishnan was one of the foremost scholars of comparative religion and philosophy in his day. He built a bridge between Eastern and Western thought showing each to be comprehensible within the terms of the other. He introduced Western idealism into Indian philosophy and was the first scholar of importance to provide a comprehensive exegesis of India's religious and philosophical literature to English speaking peoples. His academic appointments included the King George V Chair of Mental and Moral Science at the University of Calcutta and Spalding Professor of Eastern Religions and Ethics at Oxford University.

In India, his birthday is celebrated as Teacher's Day in his honor. Radhakrishnan was an eloquent spokesperson for Indian culture and religion. To a degree, his writing was apologetic, responding to Western criticism of Hinduism as a negative social force, pointing to the caste-system and status of women, for example. He engaged creatively with Western philosophy, demonstrating that Eastern thought deserved equal intellectual respect and complemented Western philosophy. He stood for the unity of the human spirit, encouraged religious harmony and concord. His life represents a bridge between East and West. Influenced by Vivekananda and by Rabindranath Tagore he shared their impulse towards unity and wanted to synthesize different, sometimes apparently contradictory aspects of his own and of other civilizations. His confidence in the human spirit was such that he was convinced that humanity need not remain an object, reacting to external forces but could become a subject. As a subject, humanity is able to model the world so that it reflects the values we choose to affirm, which, for him, were those of freedom, dignity, self-reliance and recognition of the spiritual reality that permeates physical existence. As President of India, he lent credibility to the emerging impetus towards inter-religious co-operation. His 1939 book on M. K. Gandhi helped to bring the Mahatma's ideals to the attention of a wider audience, since Sarvepalli Radhakrishnan was by then already a knight and an Oxford professor.

Sarvepalli Radhakrishnan (Sarvepalli is his family name, and Radhakrishnan is his first name) was born into a middle class Brahmin family at Tiruttani, a town in Tamil Nadu, South India, 64 km to the northwest of Chennai (formerly known as Madras). His mother tongue was Telugu. His early years were spent in Tiruttani, Tiruvallur and Tirupati. His primary education was in Gowdie School, Tiruvallur, and higher school education in P.M. High School, Gajulamandyam, Renigunta. He married Sivakamuamma in 1904 at age 16 in Vellore. They had five daughters and a son, Sarvepalli Gopal.[1] He graduated with a Master's Degree in Arts from the University of Madras.

In 1921, he was appointed to the most important philosophy chair in India, the King George V Chair of Mental and Moral Science at the University of Calcutta. Radhakrishnan represented the University of Calcutta at the Congress of the Universities of the British Empire in June 1926 and the International Congress of Philosophy at Harvard University in September 1926. In 1929, Radhakrishnan was invited to take the post vacated by Principal J. Estlin Carpenter in Manchester College, Oxford (now Harris-Manchester College). This gave him the opportunity to lecture to the students of the University of Oxford on Comparative Religion. He was knighted in 1931 and was known as Sir Sarvepalli Radhakrishnan until India attained independence; thereafter, he was addressed as Dr. Sarvepalli Radhakrishnan. He worked as the Vice-Chancellor of Andhra University from 1931 to 1936. In 1936, Radhakrishnan was named Spalding Professor of Eastern Religions and Ethics at the University of Oxford, and was elected a Fellow of All Souls College, Oxford. After 1946, Radhakrishnan's academic career was cut short when his country needed him to be ambassador to UNESCO and later to Moscow. He was also elected to the Constituent Assembly of India in 1946. 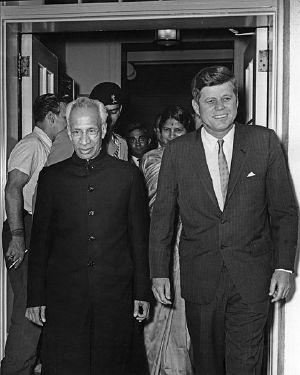 Radhakrishnan subsequently became Vice President of India in 1952. In 1956, his wife, Sivakamuamma, died after being married 51 years. He was elected President (1962-1967) of India. When he became the President of India in 1962, some of his students and friends requested him to allow them to celebrate his birthday, September 5. He replied, "Instead of celebrating my birthday, it would be my proud privilege if September 5th is observed as Teachers' Day." Since then, Teachers' Day has been celebrated in India on this day.

Radhakrishnan argued that Western philosophers, despite all claims to objectivity, were biased by theological influences from their wider culture. In one of his major works he also showed that Indian philosophy, once translated into standard academic language, is worthy of being called philosophy by Western standards. His main contribution to Indian thought, therefore, is that he placed it "on the map," thereby earning Indian philosophy a respect in the West that it had not had before. In his major work, An Idealist View of Life, he made a powerful case for the importance of instinctive thinking as opposed to purely intellectual forms of thought. He is well known for having commented on the Prasthana Trayi of the Gita, the Upanishads and the Brahma Sutra.

He was elected as a Fellow of the British Academy in 1938. He was awarded the Bharat Ratna in 1954 and the Order of Merit in 1963. He received the Peace Prize of the German Book Trade in 1961 and the Templeton Prize in 1975 a few months before his death. The Oxford University instituted the Radhakrishnan Chevening Scholarships and the Radhakrishnan Memorial Award in his memory.

Radhakrishnan is often said to have championed religious pluralism. He did believe that truth could be found in all religion but he did not contend that all religions are the same, or equal per se. He placed religions that venerate the Absolute at the top of a hierarchy of significance. Vedantic Hindusim qualifies since it venerates Brahman, which is a principle, not a person. Below are religions, such as Christianity and popular forms of Hinduism, such as Vaishnavite Hinduism, that venerate God as a person. Lower still are religions that venerate ancestors, or spirits. Other religions and we approach the Supreme alone and also naked. Religions often get in the way of genuine spirituality, cauing "division instead of unity." They can be evaluated depending on their similarity or proximity to Vedanta. However, he also believed that at the deepest level of spiritual experience, all the language and ideas and images we use to talk about the Absolute are left behind. In 1936, he attended and spoke at the First Congress of what became the World Congress of Faiths, where he suggested that if they can dispense with symbols, humans could create a new, purely spiritual religion. He said:

'Fellowship of faiths which implies appreciation of other faiths is no easy indulgence of error and weakness or lazy indifference to the issues involved. It is not the intellectual's taste for moderation or the highbrow's dislike for dogma. It is not the politician's love for compromise or being all things to all men, nor is it simply a negative freedom from antipathies. It is understanding, insight, full trust in the basic reality which feeds all faiths and its power to lead us to the truth. It believes in the deeper religion of the Spirit which will be adequate for all people, vital enough to strike deep roots, powerful to unify each individual in himself and bind us all together by the realization of our common condition and common goal.[2]

In 1961, he presented the opening address at the Center for the Study of World Religions, Harvard.