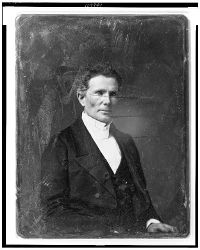 Alexander Duff, D.D. LLD. (April 15, 1806 – Sidmouth February 12, 1878), was a Christian Protestant Presbyterian missionary of Scottish heritage who worked in India. He served as the first overseas missionary of the Church of Scotland to India, arriving in 1830. Duff initiated a missionary method that would be followed by many in the world wide Protestant missions of approaching the higher caste Indians through providing western education. On July 13, 1830, Duff founded the General Assembly's Institution in Calcutta.

In 1843, Duff sided with the Free Church in the Disruption of 1843, relinquishing his school buildings to the Church of Scotland. He proceeded to found a new school, the Free Church Institution. The two institutions he founded later merged to become the Scottish Churches College. Duff co-founded the Calcutta Review, editing it from 1845 to 1849. From 1849 to 1856, Duff returned to Great Britain promoting education in India there and traveling to the United States to receive an honorary L.L.D. from University of the City of New York (today's New York University).

Duff returned to India in 1856 in time to witness the Indian Mutiny of 1857, writing widely circulated accounts of the uprising. He threw himself into the development of the University of Calcutta, refusing a professorship due to declining health. The University of Calcutta honored his work by designating their educational center Duff Hall. From 1864, Duff traveled to South Africa, returning to Scotland to sit as professor of missions at New College, Edinburgh. Until his death in 1878, Duff worked promoting missions to a number of nations as well as performing administrative duties for the Free Church.

Alexander Duff was born in the heart of Scotland, at Auchnahyle, in the parish of Moulin, Perthshire. His parents were James Duff, gardener and farmer at Auchnahagh and Jean Rattray.[1][2] After receiving his initial schooling at a local country school, he studied at the University of St. Andrews. He then accepted an offer made by the foreign mission committee of the Church of Scotland's general assembly to become their first missionary to India, and was ordained in August 1829.

After an adventurous voyage during which he shipwrecked twice, Duff arrived in Calcutta on May 27, 1830. He at once identified himself with a policy which had far-reaching effects. Christian missions in India had been successful only in converting a few low-caste groups from a needy socio-economic background. The upper caste Hindu and Muslim communities had been practically untouched. Duff astutely assessed that he had to approach those affluent communities by other than traditional evangelical methods. He recognized that holding out the prospect of upward mobility, through offering a western education, would open the door to upper caste Hindus and Muslims. Once accomplished, the possibility of teaching the Christian faith became a possibility. Duff fathered the missionary approach through education. [3] The success of his work had the effect of:

Duff's school taught the full range of liberal arts subjects, from the rudiments upwards to a university standard, alongside the Bible. He used the English language as the medium of instruction on the grounds that Indian students would best understand the topics in English. Duff wrote a pamphlet on the question, entitled A New Era of the English Language and Literature in India.[4] A government minute adopted on March 7, 1835, purporting the object of the British government in India in higher education should be the promotion of European science and literature among the natives of India, and that all funds appropriated for purposes of education would be best employed on English education alone.

Within the British Indian community of that era, numerous Orientalists saw value in the traditional learning of India and wished to support and encourage it. They opposed Duff's policy of stringently disregarding native culture and language while assiduously promoting the spread of western education, culture and religion. In 1839, Lord Auckland, the governor-general of India, agreed with them, adopting a policy that constituted a compromise between the two perspectives. 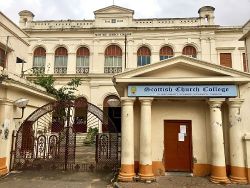 Shortly after setting foot in India in 1830, Duff opened his first school in a house located at upper Chitpur Road in the Jorasanko neighborhood of Calcutta. Feringhi Kamal Bose, an affluent Hindu, made the house available. The school soon expanded into a missionary college, known as the General Assembly's Institution. In 1834, Duff returned to Britain broken in health.[5] During that sojourn, he succeeded in securing the approval of his church for his educational plans and in arousing much interest in the work of missions in India. In 1836, the Calcutta institution was moved to Gorachand Bysack's house in the Garanhata neighborhood. On 23 February 1837, Mr. MacFarlon, the Chief Magistrate of Calcutta, laid the foundation stone for a new building belonging to the mission itself. John Gray designed the building while Capt. John Thomson supervised the construction, both of the British East India Company. The construction of the building was completed in 1839.

In 1840, Duff returned to India. At the Disruption of 1843, Duff sided with the Free Church. He gave up the college buildings, with all their effects, and with unabated resolve set to work to provide a new institution, later known as the Free Church Institution (those two institutions founded by Duff, i.e., the General Assembly's Institution and the Free Church Institution, later merged to form the Scottish Churches College. After the unification of the Church of Scotland in 1929, the institution became known as Scottish Church College). He had the support of Sir James Outram, Sir Henry Lawrence, and the encouragement of seeing a new band of converts, including several young men born of high caste. In 1844, governor-general Viscount Hardinge opened government appointments to all who had studied in institutions similar to Duff's institution. In the same year, Duff co-founded the Calcutta Review, of which he served as editor from 1845 to 1849.

In 1849, Duff returned to Britain. He served as moderator of the Free Church assembly in 1851 and gave evidence before various Indian committees of parliament on matters of education. This led to an important dispatch by Viscount Halifax, president of the Board of Control, to governor-general the Marquess of Dalhousie, authorizing an educational advance in primary and secondary schools, the provision of technical and scientific teaching, and the establishment of schools for girls. In 1854, Duff visited the United States, where University of the City of New York (New York University) gave him the degree of L.L.D.; he already held the D.D. from University of Aberdeen.

In 1856, Duff returned to India, where the mutiny broke out the following year. James Kennedy collected Duff's letters describing the events, publishing them in a volume entitled The Indian Mutiny - its Causes and Results (1858).[6] During that period in India, Duff gave much thought and time to the University of Calcutta, which owes its examination system and the prominence given to physical sciences to his influence. In 1863, Sir Charles Trevelyan offered him the post of vice-chancellor of the University, but his health compelled him to leave India. As a memorial of his work, the university constructed and named the center of the educational buildings of the University of Calcutta Duff Hall.

In 1864, Duff visited South Africa, and on his return became convener of the foreign missions committee of the Free Church. He raised money to endow a missionary chair at New College, Edinburgh, and became first professor. Among other missionary labors of his later years, he helped the Free Church mission on Lake Nyassa, traveled to Syria to inspect a mission at Lebanon, and assisted Lady Aberdeen and Lord Polwarth to establish the Gordon Memorial Mission in Natal. In 1873, a schism threatened the Free Church as a result of negotiations for union with the United Presbyterian Church. The Free Church leaders called Duff to the presiding chair, and guided the church through that crisis. He also took part in forming the alliance of Reformed Churches holding the Presbyterian system.

Alexander Duff died on February 12, 1878. By his will, he devoted his personal property to found a lectureship on foreign missions on the model of the Bampton Lectures.

Retrieved from https://www.newworldencyclopedia.org/p/index.php?title=Alexander_Duff&oldid=1018574
Categories:
Hidden category:
This page was last edited on 28 February 2019, at 16:15.
Content is available under Creative Commons Attribution/Share-Alike License; additional terms may apply. See Terms of Use for details.