Effects of stress on the body

Physiological stimuli or conditions such as a sudden loud noise, lack of air, or the presence of disease can be considered stress. Likewise, psychological conditions such as concern about one's job, one's future, a loved one, or a particular interpersonal relationship can be considered stress. In this later sense, stress is viewed as roughly the opposite of relaxation or serenity.

Stress causes either a physiological and/or psychological response called the general adaptation syndrome—essentially, the three stages of alarm, resistance, and exhaustion— first described in 1936 by Hans Selye in the journal Nature. A response to stress can include the endocrine system and nervous system preparing the body for action.

A normal part of life, stress can lead to a positive response by a person, leading to increased knowledge and personal growth, or it can result in psychological or physiological problems. Prolonged stress, not managed well, can be particularly damaging.

Individuals who deal with stress in inappropriate ways—drugs, alcohol, eating, smoking, promiscuity, lashing out at others, depression, and so forth—can harm their body and actually make the stress or its reoccurrence worse. More appropriate preventive and coping measures include regular exercise, meditation, prayer, relaxation techniques, and lifestyle changes.

Stress and its effects 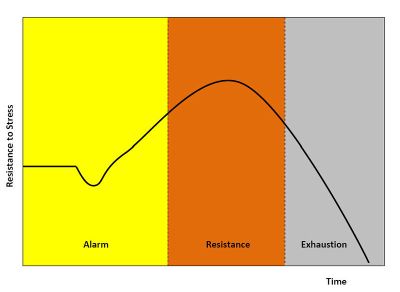 Selye described the general adaptation syndrome as having three stages:

There are two basic types of stress: eustress ("positive stress") and distress ("negative stress"), roughly meaning challenge and overload. In some cases, stress in and of itself is neither positive or negative. It is more the way that a person responds to the event that determines whether it has a positive or negative impact. Sometimes the same stressful event will be positive for one person and negative for another. For example, two skiers who suddenly find themselves on a steep slope may respond very differently. One may enjoy the excitement of the unanticipated challenge, whereas the other one may be in fear and terror that they will be unable to negotiate the terrain. When the word stress is used alone, typically it is referring to distress.

Serenity is defined as a state in which an individual is disposition-free or largely free from the negative effects of stress. In some cultures, it is considered a state that can be cultivated by various practices, such as meditation, relaxation, physical disciplines such as Tai Chi Chuan and Hatha Yoga, and other forms of training.

Stress can directly and indirectly contribute to general or specific disorders of body and mind. Stress can have a major impact on the physical functioning of the human body. Such stress raises the level of adrenaline and corticosterone in the body, which in turn increases the heart rate, respiration, and blood pressure and puts more physical stress on bodily organs. Long-term stress can be a contributing factor in heart disease, high blood pressure, stroke muscle tension, cancer, mental disorders, and other illnesses.

Stress can be very useful in certain situations. For example, fear can be an enormous source of power when someone needs to flee from a dangerous situation or use greater than average physical abilities. Stress can also be the catalyst for someone to change their way of thinking, thus changing old patterns that do not work in their life to new more healthy ones.

Any factor that causes stress is called a stressor. There are two kinds of stressors: processive stressors and systemic stressors.

Processive stressors are elements in the environment (for example, elevated sound levels or intense light) perceived by the organism as potential dangers. These do not cause damage directly, but are processed in the cerebral cortex. The processed information is then sent via the limbic system in the hypothalamus, where they activate the supreme centers of the autonomic nervous system. This results in the fight-or-flight (or sympathetico-adrenal) response. Occupational and financial stressors in humans are an example of a processive stressor (Bauer 2004).

Systemic stressors are those that pose an immediate and serious threat to the organism's homeostasis, such as extreme temperature, water deprivation, pain reception, immune system threats, as well as tissue necrosis, hypotension, and/or hypoxia (Bauer 2004; Hersh 2005). These require less cognitive processing than processive stressors.

Often, both types of stressors occur simultaneously. They are usually accompanied by pain and/or intense emotions.

Individuals can respond very differently to the same stressor. Any given situation can cause eustress in one person and distress in another.

Contributing factors for the diverse responses include differences in physiology and life circumstances, different outlooks on life, as well as different methods of stress management. Methods of coping that work well in childhood situations often become ingrained and habitual, and often follow the child into adulthood. In the adult world, these skills can be quite inappropriate, and stress heightens as the person clings to obsolete behaviors. However, new skills can be learned, and poor coping methods replaced.

Treating or managing stress usually falls into three approaches: A person can (1) reduce or eliminate the stressor, (2) respond to the stress in a different way, or (3) relieve the stress through a variety of techniques.

Most stressors can be responded to in a different way. Whether it is choosing to not react with anger to certain situations, learning to overcome fears, learning to not be so emotionally upset, or setting new priorities, persons usually have some choice in how they respond to stressors.

When it is impossible to avoid a stressor and/or new ways or responding to a stressor are not enough, a person can always schedule time to relieve their stress. A person may schedule activities to relieve stress such as Tai Chi Chuan, yoga, aerobic exercise, massage, listening to music, aroma therapy, biofeedback, and meditation.

For example, when Selye reviewed the physiological changes measured in practitioners of transcendental meditation (TM), he concluded that such changes were the opposite of the body's reaction to stress. The therapeutic effect of TM was most distinct in people whose coping skills were poorly adapted to the stress of daily life.

Persons who manage stress well are often risk-takers who do not react negatively to uncertainty, people who are internally motivated as opposed to being motivated by external factors, and people who take responsibility for creating outcomes they want in life as opposed to hoping that they might occur.

A number of psychological and sociological factors have been consistently demonstrated to act as a moderator against stress in the development of chronic psychological or physical disease (such as depression or hypertension). Among these many factors are optimism or hope, social support, socioeconomic status, and sense of community. 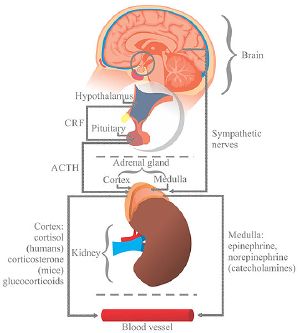 The general neurochemistry of the general adaptation syndrome is now believed to be well understood, although much remains to be discovered about how this system interacts with components in the brain and elsewhere in the body.

The body reacts to stress first by releasing the catecholamine hormones, epinephrine and norepinephrine, and the glucocorticoid hormones, cortisol and cortisone.

The hypothalamic-pituitary-adrenal (HPA) axis is a major part of the neuroendocrine system, involving the interactions of the hypothalamus, the pituitary gland and the adrenal glands. The HPA axis is believed to play a primary role in the body's reactions to stress, by balancing hormone releases from the adrenaline-producing adrenal medulla and from the corticosteroid-producing adrenal cortex.

About the time of Selye's work, the gradual realization dawned that such concepts as anxiety, antagonism, tiredness, frustration, distress, overwork, premenstrual tension, over-focusing, confusion, mourning, and fear could all come together in a general broadening of the meaning of the term stress. The popular use of the term in modern folklore expanded rapidly, spawning an industry of pop psychology, self-help, personal counseling, and sometimes quackery.

The use of the term stress in serious recognized cases such as those of post-traumatic stress disorder and psychosomatic illness has scarcely helped clear analysis of the generalized 'stress' phenomenon. Nonetheless, some varieties of stress from negative life events, or distress, and from positive life events, or eustress, can clearly have a serious physical impact distinct from the troubles of what psychotherapists call the "worried well". Stress responses can activate the sympathetic nervous system and release of stress hormones, including adrenaline/epinephrine and cortisol.

Sympathetic nervous output tends to divert blood flow to the large muscles—the body 'thinks' it has to run away from something or fight something: the so-called flight/fright syndrome of ancient evolutionary heritage—and blood flow is correspondingly less to the bowel and other non-muscle organs. We all recognize the effects: dry mouth, motor agitation, sweating, pallor, enlarged pupils, and insomnia. Our modern lifestyle tends to cause continual sympathetic nervous system activation with very little opportunity for the parasympathetic (also called 'vegetative') nervous system to activate. When this system is active the bowel and other non-muscle organs get good blood-flow, the pupils constrict, the glands all function well and secrete their various compounds. Absence of parasympathetic activation leads to poor digestion and probably also to poor healing and organ function. It is vital to take time out from our modern lifestyles to allow for rest and proper parasympathetic action in our bodies.

Retrieved from https://www.newworldencyclopedia.org/p/index.php?title=Stress_(biology)&oldid=1079478
Categories:
This page was last edited on 23 September 2022, at 16:01.
Content is available under Creative Commons Attribution/Share-Alike License; additional terms may apply. See Terms of Use for details.