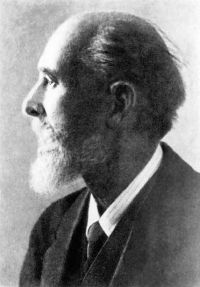 Peter Carl Fabergé (original name Carl Gustavovich Fabergé) (May 30, 1846 – September 24, 1920) was a Russian jeweler, best known for the famous Fabergé eggs he designed for the Russian royal family until he was forced to flee the Bolshevik Revolution of 1917, when communism gained a foothold in Russia. Although he attempted to establish himself in Europe, he never truly recuperated from his forced exile and died in Switzerland.

Faberge considered himself more than a jeweler; he felt his unique creations, especially the eggs representative of Easter, made of precious metals and gemstones, bordered on artistry. Recently, a new generation of Faberges have returned to the more favorable climate of the present day Russian Federation and have opened a store on Moscow's Red Square, bringing full circle the legacy of their progenitor. Although considered extravagant by the old guard of the Soviet Union, the original Faberge eggs are valued not only for their beauty but for their historical documentation of Russian history during the reign of two Tsars—Alexander III and Nicholas II. 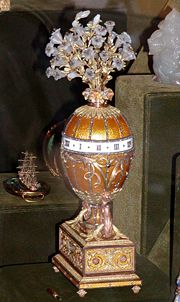 Bouquet of Lilies or Madonna Lily Egg by Fabergé

He was born in St. Petersburg, to the jeweler Gustav Fabergé and his Danish wife Charlotte Jungstedt. His mother was the daughter of a Danish painter, and his father was a jeweler and goldsmith. Gustav Faberge's father's family were originally from La Bouteille, in the Picardy region of North Eastern France, but as Huguenots, they were forced to flee after the revocation of Edict of Nantes by King Louis XIV, increased Catholic persecution of the sect. Initially, the family fled to Germany near Berlin, then in 1800, to the Baltic province of Livonia, then a part of Russia.

Carl Faberge began his education at St. Anne's Gymnasium, the German school in St. Petersburg. When he was eighteen, his father sent him on a trip abroad, where he was apprenticed to a jeweler at the House of Friedman in Frankfurt. In 1864, he returned to St. Petersburg, and joined his father’s business, taking over its management in 1872. His brother, Agathon joined him and the two brothers, known for their gold and silver items, decided to "start something new."[1] They achieved their first renown with honors at the Pan-Russian Exhibition held in Moscow in 1882.

In 1885, the first Faberge Easter egg was presented to Alexander III, who was seeking something beautiful and original to give to his wife, the Tsarina Maria. Its subsequent popularity led the Tsar to commission Faberge to make not only a jeweled, enameled Easter egg every year, but other court accessories such as necklaces, miniatures, figure groups, and animals. In addition Faberge was commissioned to make the annual Easter egg, symbolizing the Resurrection and commemorating the holy day of Easter, the most revered day on the Russian calendar. That same year the House of Fabergé was bestowed with the coveted title Goldsmith by special appointment to the Imperial Crown, beginning a long association with the Russian Tsars.

Tsar Nicholas II, Alexander's heir, ordered two eggs each year, one for his mother and one for his own wife, Alexandra, a practice which continued from 1885 to 1917. After the Bolshevik Revolution the royal family, including their five children, were held captive in Siberia and executed on July 17, 1918. Many eggs were destroyed or confiscated at that time. Only Nicholas' mother, the Dowager Empress Maria Fedorovna, escaped to Europe aided by her nephew Great Britain's King George V. She managed to bring with her the Order of St. George egg, the last Fabergé Imperial Easter egg she received from her son Nicholas. Amidst the intrigue, tragedy and upheaval the tradition of the eggs was temporarily lost until it was revived some years later by the descendants of Carl Faberge.[2]

By the turn of the century, The House of Faberge had grown to over 500 employees with branches in St. Petersburg, Moscow, Odessa, and Kiev. It produced some 150,000 objects including Christmas ornaments, cigarette cases, brooches, photo frames, and boxes between 1882 and 1917. In 1900, Faberge's work represented Russia at the 1900 World’s Fair in Paris. Carl Faberge received international recognition in addition to an appointment as Supplier to the Court of His Imperial Majesty.

In 1917, amidst the chaos of the October Revolution, he sold his shares in the company to his employees and fled Russia. He went first to Finland, with assistance from the British Embassy, and then to Wiesbaden, Germany, making stops in Riga, Berlin, Frankfurt, and Hamburg. Fabergé and his wife moved to the Bellevue Hotel in Lausanne, Switzerland. When he died a few years later, in 1920, he was buried beside his wife Augusta in the Cimetière du Grand Jas in Cannes, France.

Soon after the revolution, the contents of the Romanov palaces were confiscated by the Bolsheviks. Most of the Fabergé eggs, along with masses of Imperial gold, silver, jewels and icons were inventoried, packed in crates and taken to the Kremlin Armory.

There the crates containing the eggs remained unopened and guarded. But Lenin's efforts to preserve Russia's cultural heritage were undermined when Joseph Stalin came to power. Stalin began trading the Russian Imperial legacy for desperately needed Western currency to support his new regime.

The curators at Moscow's Kremlin Armory, at the risk of execution, tried to hide the most valuable pieces. But between 1930 and 1933, fourteen of the Imperial Easter eggs were sold and left the country. According to author Géza von Habsburg: The first items that were sold were taken out by Russian Commissars to Paris and to London. The man who managed to get most of the Fabergé eggs was a man who was well known in the United States, Armand Hammer. A great entrepreneur, president of Occidental Petroleum and personal friend of Lenin, his father was founder of the Communist party in the United States.[3]

The Fabergé Family remained scattered following the Revolution[4] Both Eugène and Alexander settled in Paris, and established Fabergé & Cie, which traded and restored objects made by the House of Fabergé as well as general jewelery. After World War II, they discovered that in the United States, Sam Rubin had established Fabergé Inc. and was manufacturing perfume under the Fabergé name. It was later discovered that he had also registered the Fabergé trademark for jewelery. Unable to afford protracted and expensive litigation, the Fabergé Family settled out of court for $25,000 in 1951, with the stipulation that the Fabergé name was to be used solely in connection with perfume. Sam Rubin sold Fabergé Inc. in 1964 for $26 million. The company passed through various hands until Unilever purchased it in 1989 for $1.55 billion.[4] Soon afterwards Unilever discovered that it could use Fabergé trademarks in connection with jewelry. The company registered the Fabergé name as a trademark across a wide range of merchandise internationally and granted licenses to third parties to make and sell a range of products under the Fabergé cosmetics name.

In 2007, the multinational company Unilever sold its entire global portfolio of trademarks, licenses and associated rights relating to the Fabergé brand to new owner, Cayman Islands-based Fabergé Ltd., which is advised by Pallinghurst Resources LLP, an investment advisory firm based in London and chaired by Brian Gilbertson, the former CEO of BHP-Billiton plc, the world's largest mining company.

Mark Dunhill, the former President of Alfred Dunhill Limited, became Fabergé Limited's CEO on November 1, 2007. Sarah and Tatiana Faberge, the last direct descendants of Carl Fabergé, have been employed by Fabergé Limited to advise on Fabergé style and history.

According to Alexander von Solodkoff:

The Imperial Easter Eggs - exquisite artifacts of jewels and precious metals are Faberge's finest and most famous achievement. Between 1885 and 1916 some 54 were commissioned by the Tsars Alexander and Nicholas. Each, together with the cunningly wrapped 'surprise' which was frequently concealed inside, is a masterpiece of elegance, inventiveness, ingenuity, and craftsmanship.[1]

Forty-four of the Faberge eggs are known to survive today.

After the Bolshevik Revolution the Faberge eggs were scattered throughout the world, bought by royal families of various countries and those wealthy enough to collect them. There were five major collectors in the United States during the 1930s: Matilda Geddings Gray, Lillian Thomas Pratt, Marjorie Merriweather Post, India Early Minshall, and Malcolm S. Forbes. Though some Imperial eggs originally sold at auction for as little as four or five hundred dollars, it took several decades for the eggs to gain recognition as magnificent works of art and to be valued in the millions of dollars.

In 2006, oil and metals tycoon Viktor Vekselberg bought a collection of original eggs from the Forbes family for over $90 million and brought them back to Russia.

On November 27, 2007, The Rothschild Fabergé Egg was auctioned at Christie's (London) for £8.9 million (including commission). The price achieved by the egg set three records: it is the most expensive timepiece, Russian object, and Fabergé egg ever sold, surpassing the $9.6 million sale of the 1913 Winter egg in 2002.[5]