Peter Cooper (February 12, 1791 – April 4, 1883) was an American industrialist, inventor, philanthropist, and candidate for President of the United States. After 150 years, Cooper's legacy of Cooper Union still provides scholarship for those students that excel in the arts, engineering, and architecture.

Cooper contributed significantly to social justice, wrote about good governance, and espoused Christian values—he attended a Unitarian Church. He believed that knowledge would enable humanity to dominate creation, and to subdue it and that the pursuit of knowledge—in the arts as well as the sciences—would elevate humanity.

Cooper was born in New York City, the son of Dutch descendents. He had little formal schooling and worked in the family trade of hatmaking. He then worked as a coachmaker's apprentice, cabinet maker, grocer and was involved in the manufacturing and selling of cloth-shearing machines. During Cooper’s youth, trades were considered more useful than education. The trades Cooper became adept in included: hat-making, brewing and brick making, among other things. 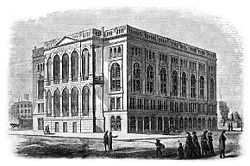 Cooper Union for the Advancement of Science and Art. Original Building

In about 1828, he started a successful glue and isinglass factory, before building the Canton Iron Works near Baltimore in 1830. There he manufactured the first steam powered railroad locomotive made in America, which was called Tom Thumb. The engine ran successfully on the Baltimore and Ohio Railroad on August 28, 1830.

He then erected a rolling mill and an iron mill in New York City, where he was the first to successfully use anthracite coal to puddle iron. In 1845, he moved his machinery to Trenton, New Jersey where he built the largest rolling-mill in the United States for producing railroad iron. There, in 1854, he oversaw the production of the first structural wrought iron beams. 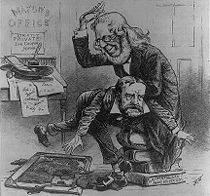 In 1840, he became an alderman in New York City. As a prosperous businessman, he conceived of the idea of having a free institute in New York, similar to the Polytechnic Institute in Paris. He erected a building and endowed art schools, spending between $600,000 and $700,000, for preparing young men and women of the working classes for business. In 1858, he presented the Cooper Union for the Advancement of Science and Art to the City of New York.

In 1854, Cooper was one of five men who met at the house of Cyrus West Field and formed the New York, Newfoundland and London Telegraph Company. He was among those supervising the laying of the first Transatlantic telegraph cable in 1858. He also patented the first gelatin dessert, which later became better known by the brand name Jell-O.

Cooper wrote in his diary about the experience of the Transatlantic telegraph cable:

"After the two ocean cables had been laid successfully, it was found necessary to have a second cable across the Gulf of St. Lawrence. Our delays had been so trying and unfortunate in the past, that none of the stockholders, with the exception of Mr. Field, Mr. Taylor, Mr. Roberts, and myself, would take any interest in the matter. We had to get the money by offering bonds, which we had power to do by charter; and these were offered at fifty cents on the dollar. Mr. Field, Mr. Roberts, Mr. Taylor, and myself were compelled to take up the principal part of the stock at that rate, in order to get the necessary funds. We had to do the business through the Bank of Newfoundland, and the bank would not trust the company, but drew personally on me. I told them to draw on the company, but they continued to draw on me, and I had to pay the drafts or let them go back protested. I was often out ten or twenty thousand dollars in advance, in that way to keep the thing going. After the cable became a success, the stock rose to ninety dollars per share, at which figure we sold out to an English company. That proved to be the means of saving us from loss. The work was finished at last, and I never have regretted it, although it was a terrible time to go through."[1]

Prior to the Civil War, Cooper was active in the anti-slavery movement and promoted the application of Christian concepts to solve social injustice. He was a strong supporter of the Union cause during the American Civil War and an advocate of the government issue of paper money.

Influenced by the writings of Lydia Child, Cooper became involved in the Indian reform movement, organizing the privately funded United States Indian Commission. This organization, whose members included William E. Dodge and Henry Ward Beecher, was dedicated to the protection and elevation of Native Americans in the United States and the elimination of warfare in the western territories. Cooper's efforts led to the formation of the Board of Indian Commissioners, which oversaw Ulysses S. Grant's Peace Policy. Between 1870 and 1875, Cooper sponsored Indian delegations to Washington D.C., New York City, and other Eastern cities. These delegations met with Indian rights advocates and addressed the public on United States Indian policy. Speakers included: Red Cloud, Little Raven and Alfred B. Meacham, and a delegation of Modoc and Klamath Indians.

Cooper was an ardent critic of the gold standard and the debt-based monetary system of bank currency. Throughout the depression from 1873-1878, he said that usury was the foremost political problem of the day. He strongly advocated a credit-based, Government-issued currency of United States Notes. He outlined his ideas in his 1883 book.[2] 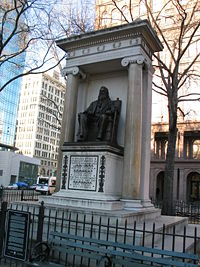 Peter Cooper Monument in front of the Cooper Union

Cooper was encouraged to run in the 1876 presidential election for the Greenback Party without any hope of being elected. His running mate was Samuel Fenton Cary. The campaign cost more than $25,000.

The election was won by Rutherford B. Hayes of the Republican Party. Cooper was surpassed by another unsuccessful candidate: Samuel Jones Tilden of the Democratic Party.

Peter Cooper died on April 4, 1883. He is buried in Green-Wood Cemetery in Brooklyn, NY.

In 1943, a United States Liberty ship named the SS Peter Cooper was launched. It was renamed the SS Samarkand after being loaned to the British. In 1971, the ship was scrapped.

New York's Peter Cooper Village was named in his honor.

Cooper learned finance under Albert Gallatin, who was Secretary of the Treasury from 1801-1814. He was also Vice-President of the New York Board of Currency for a while. As a result, Cooper wrote much about financial topics. One of his more interesting assertions was in his 1883 book Ideas for a Science of Good Government, in which he claimed that the prime cause of the American Revolution was Parliament's outlawing of the Colonial Scrip currency in 1764, which caused an economic depression by outlawing the medium of exchange and created widespread dissatisfaction Cooper writes:

After Franklin had explained…to the British Government as the real cause of prosperity, they immediately passed laws, forbidding the payment of taxes in that money. This produced such great inconvenience and misery to the people, that it was the principal cause of the Revolution. A far greater reason for a general uprising, than the Tea and Stamp Act, was the taking away of the paper money.[3]

In 2006, he was inducted into the National Inventors Hall of Fame.

Retrieved from https://www.newworldencyclopedia.org/p/index.php?title=Peter_Cooper&oldid=1088909
Categories:
This page was last edited on 24 November 2022, at 01:33.
Content is available under Creative Commons Attribution/Share-Alike License; additional terms may apply. See Terms of Use for details.