Henry Ward Beecher (June 24, 1813 – March 8, 1887) was a prominent, theologically liberal American Congregationalist clergyman, social reformer, abolitionist, and speaker in the mid to late nineteenth century. He became one of the most influential public figures of his time. He supported Free Soil political candidates and later, Republicans. On the outbreak of the Civil War his church raised and equipped a volunteer regiment. He edited the religious publications The Independent and The Christian Union during the 1860s and 1870s, and among his many books is Evolution and Religion. In 1874, he was acquitted on an adultery charge after a sensational trial.

Born in Litchfield, Connecticut, he was the son of Lyman Beecher, an abolitionist Congregationalist preacher from Boston, and Roxana Foote. Roxana died when Henry was three. He was the brother of Harriet Beecher Stowe the author of Uncle Tom's Cabin and Catharine Esther Beecher a noted educator. He had two other prominent and activist siblings, a brother, Charles Beecher, and a sister, Isabella Beecher Hooker.

The Beecher children were raised to be examples of the orthodox ministry that Lyman Beecher preached. His family not only prayed at the beginning and end of each day but also sang hymns and prepared for other rigorous church obligations.

Beecher attended Boston Latin School, graduated from Amherst College in 1830 and in 1834 received a degree from Lane Theological Seminary outside Cincinnati, Ohio, which his father then headed. After graduation he became a minister in Lawrenceburg three years later in 1837 he was asked to take over the pastorship of the Second Presbyterian Church in Indianapolis, Indiana. In August of that same year, he married Eunice White Bullard; they had nine children.

In 1847, he was appointed the first minister of the new Plymouth Congregational Church in Brooklyn, New York. That fall the Beecher family moved to Brooklyn.

Beecher's fiery preaching style led to his becoming editor of several religious magazines, and he received large advances for a novel and for a biography of Jesus. 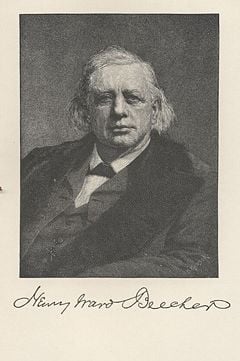 Thousands of worshipers flocked to Beecher's enormous Plymouth Church in Brooklyn. Abraham Lincoln (who said of Beecher that no one in history had "so productive a mind") was in the audience at one point, and Walt Whitman visited. Mark Twain went to see Beecher in the pulpit and described the pastor "sawing his arms in the air, howling sarcasms this way and that, discharging rockets of poetry and exploding mines of eloquence, halting now and then to stamp his foot three times in succession to emphasize a point."[1]

In the highly publicized scandal known as the Beecher-Tilton Affair he was tried on charges that he had committed adultery with a friend's wife, Elizabeth Tilton. In 1870, Tilton had confessed to her husband, Theodore Tilton, that she had had a relationship with Henry Ward Beecher. Both men pressured Tilton to recant her story, which she did, in writing. She subsequently retracted her recantation.

Woodhull published a story in her paper, Woodhull and Claflin's Weekly, exposing the affair of America's most renowned clergyman. The story created a national sensation. As a result, Woodhull was arrested in New York City and imprisoned for sending obscene material through the mail. The Plymouth Church held a board of inquiry and exonerated Beecher, but excommunicated Mr. Tilton in 1873.

Tilton then sued Beecher: the trial began in January, 1875, and ended in July when the jurors deliberated for six days but were unable to reach a verdict. His wife loyally supported him throughout the ordeal.

A second board of inquiry was held at Plymouth Church and this body also exonerated Beecher. Two years later, Elizabeth Tilton once again confessed to the affair and the church excommunicated her. Despite this Beecher continued to be a popular national figure. However, the debacle split his family. While most of his siblings supported him, one of his sisters, the nationally known women's rights leader Isabella Beecher Hooker, openly supported one of his accusers. 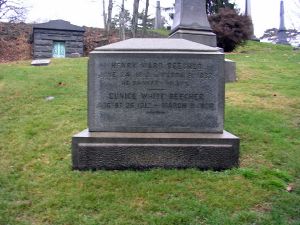 Henry Ward Beecher died of a cerebral hemorrhage in March, 1887. The city of Brooklyn where he lived declared a day of mourning upon, and the New York State Legislature went into recess to honor him. He was buried on March 11, 1887 in Brooklyn's Green-Wood Cemetery.

An advocate of women's suffrage, temperance and Darwin's theory of evolution, and a foe of slavery, Beecher held that Christianity should adapt itself to the changing culture of the times. He was also passionately anti-Catholic and was contemptuous towards Irish-Americans in an age that was anti-Irish Catholic due to the waves of Irish immigrants coming to America because of the potato famine.

He raised funds to buy weapons for those willing to oppose slavery in Kansas and Nebraska, and the rifles bought with this money became known as "Beecher's Bibles." Politically active, he supported first the Free Soil Party and later the Republican Party.

During the American Civil War, his church raised and equipped a volunteer infantry regiment. Early in the war, Beecher pressed Lincoln to emancipate the slaves through a proclamation. The preacher later went on a speaking tour in England to undermine support for the South by explaining the North's war aims. Near the end of the war, when the Stars and Stripes were again raised at Fort Sumter in South Carolina, Beecher was the main speaker.

Retrieved from https://www.newworldencyclopedia.org/p/index.php?title=Henry_Ward_Beecher&oldid=1008334
Categories:
Hidden category:
This page was last edited on 19 December 2017, at 17:42.
Content is available under Creative Commons Attribution/Share-Alike License; additional terms may apply. See Terms of Use for details.