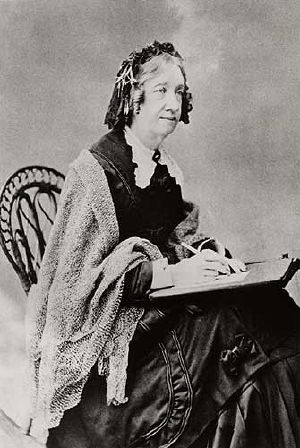 Catharine Esther Beecher (September 6, 1800 – May 12, 1878) was a noted educator and author renowned for her forthright opinions on women’s education. Unlike her sisters, Catherine was neither an abolitionist nor a suffragette. Beecher strongly supported allowing children to simply be children and not forcing adulthood upon them prematurely. She believed that children lacked the experience needed to make important life decisions and that, in order to become healthy self-sufficient adults, they need to be allowed to express themselves freely in an environment suited to children. It was these beliefs that led to her support of the system of kindergartens.

Beecher was born in East Hampton, New York, the oldest of 13 children born to Lyman and Roxanna Foote Beecher. Her father was an outspoken religious leader. Her siblings include her sister Harriet Beecher Stowe, the nineteenth century abolitionist and writer most famous for her groundbreaking novel Uncle Tom's Cabin, and two brothers who were both highly regarded Congregationalist ministers, Henry Ward Beecher and Charles Beecher.

Her father's ministry caused the family to relocate several times. Lyman Beecher served congregations in Connecticut and Massachusetts. She was educated at home until she was 10-years-old, when she was sent to a private school where she was taught the limited curriculum available to young women. The experience left her longing for additional opportunities for education, and she taught herself subjects not commonly offered to women. The family settled in Litchfield, Connecticut in 1810, at this point Beecher began attending Sarah Pierce’s academy for young women.

Beecher's life changed dramatically in 1816 when her mother, Roxana Beecher, died of tuberculosis. Being the oldest daughter she had to assume the motherly responsibilities of the household. She spent her days tending to house, cooking all the meals and caring for her younger siblings. She did find time for herself, she met and became engaged to Alexander Fisher, a Yale professor. Beecher anxiously looked forward to raising her own family. However, her dreams were shattered when her fiance died in a shipwreck in 1923.

Fischer left Beecher a substantial fortune when he was killed. Beecher decided to use her inheritance to establish a school for young women in Hartford, Connecticut with her sister Mary. The school began in 1823 with their sister Harriet as one of the first seven students. Since childhood Beecher had always been disappointed in the education available for girls, she implemented a new, rich curriculum that included rhetoric, logic, natural philosophy, chemistry, history, Latin, and algebra. The Beecher School became the Hartford Female Seminary in 1827. Despite her unique and balanced curriculum, Beecher was unable to secure long lasting funding frustrated she left the seminary in 1831. She traveled with her father, Lyman Beecher, to Cincinnati to begin another academy for young women. The Western Female Institute was established in 1832. Similarly to the seminary, this new institute lost funding after five years.

Refusing to be defeated Beecher decided her next venture should be recruiting and training future teachers. The United States was a growing country and men began leaving the profession to pursue work in the developing fields of business and industry. Beecher recognized women would soon become the majority in the teaching world. She spent the majority of her time in western frontier towns mentoring young girls to join the teaching profession. She founded the Central Committee for Promoting National Education later renamed National Board of Popular Education.

Beecher published her most famous work in 1842, A Treatise on Domestic Economy for the Use of Young Ladies at Home and at School. This book discussed the underestimated importance of women’s roles in society. She wanted to impress upon young women that they had choices, they didn't have to marry and raise families upon becoming a certain age. A single woman could become a teacher allowing her to share her feminine wisdom with society and become more mature and better prepared for her possible future role of wife and mother.

If all females were not only well educated themselves but were prepared to communicate in an easy manner their stores of knowledge to others; if they not only knew how to regulate their own minds, tempers, and habits but how to effect improvements in those around them, the face of society would be speedily changed.[1]

The final decades of her life were devoted to writing and lecturing. She died in Elmira, New York in 1878.

Beecher was a woman who was aware of her vocation at an early age. She came a prestigious background yet was not afforded a similar education to her brothers. She vowed to assist all young women to obtain the education they deserved. She never called herself an abolitionist her chief concern was children and their proper education.

Beecher founded The American Woman’s Educational Association in 1852, an organization focused on furthering educational opportunities for women. She also founded the Western Female Institute in Cincinnati (along with her father Lyman) and The Ladies Society for Promoting Education in the West. She was also instrumental in the establishment of women’s colleges in Burlington, Iowa, Quincy, Illinois, and Milwaukee, Wisconsin.