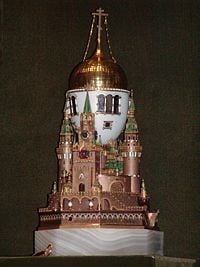 A Fabergé egg is considered to be any one of the sixty-nine[1] jeweled eggs made by Peter Carl Fabergé and his assistants between 1885 and 1917. Fifty of those eggs—known as the Imperial Fabergé Easter eggs—were made and presented to Czars Alexander III and Nicholas II of Russia,[2] initially as gifts for their wives, the Tsarinas. At that time, a tradition was started within the royal Russian family that included making a jeweled egg to commemorate Holy Days and special celebrations.

Each Fabergé egg is custom made of precious metals or hard stones decorated with combinations of enamel and gemstones. Every egg is unique and the designs, at least initially, included a surprise inside.

The name Fabergé Egg has become synonymous with luxury and opulence. Today they are valued not only as masterpieces of decorative art, but the original Imperial eggs are also regarded as part of the legacy and historical record connected to the last days of the Romanov Dynasty. In 1885, under the commission of Czar Alexander III of Russia, Carl Fabergé and his goldsmiths designed and constructed the first Imperial egg. It was presented as an Easter gift for the Tsar's wife Maria Fyodorovna.[3]

On the outside it looked like a simple egg of white enameled gold, but upon opening, it revealed a golden yolk. The yolk itself had a golden hen inside it, which in turn had a tiny crown with a ruby hanging inside, reminiscent of the matryoshka nesting dolls.

Empress Maria was so delighted by this gift that Alexander appointed Fabergé "Court Supplier" and commissioned an Easter gift each year thereafter, stipulating only that it be unique and contain a surprise. His son, Nicholas II of Russia continued the tradition, annually presenting an egg each spring to his wife Alexandra Fyodorovna as well as his then-widowed mother.

From 1885, the eggs were produced on a nearly annual basis. Once an initial design was approved, the work was carried out by an entire team of artisans under the supervision of Peter Carl Fabergé. Among the designers were Michael Perkhin, Henrik Wigström and Erik August Kollin. At the peak of his production Faberge employed hundreds of craftsmen in his St. Petersburg studio, however, it was his own ingenuity and inventiveness that drove the success of his business.

The Imperial eggs soon garnered international fame, as members of royalty in Europe became aware of them. Fabergé went on to make fifteen more (known) eggs for private clients. Among them were a series of twelve Easter eggs commissioned by Alexander Ferdinandovich Kelch, a Siberian gold mine industrialist. These eggs were not as extravagant as the Imperial eggs, and were not as unique in design; they often copied the originals.

Two additional eggs were planned and designed (but never delivered); they were the Constellation and Karelian Birch eggs of 1917. The Constellation Egg was the last Fabergé egg created. Due to the tumultuous events surrounding the Russian Revolution of 1917, the egg was never finished or presented to Tsar Nicholas' wife, the Tsaritsa Alexandra Feodorovna.

At the time of the Bolshevik Revolution only one, the 1916 Order of St. George egg, managed to escape, along with its owner, the Dowager Empress Maria Feodorovna to Europe.[4] The rest remained in Petrograd.

Following the Revolution, the House of Fabergé was nationalized by the Bolsheviks, and the Fabergé family fled to Switzerland, where Peter Carl Fabergé died in 1920. The Romanov palaces were ransacked and their treasures moved by order of Vladimir Lenin to the Kremlin Armoury. In the process of being sequestered away some were destroyed or lost.[5]

In 1927, in a bid to acquire more foreign currency, Joseph Stalin had many of the eggs sold after having them appraised by Agathon Fabergé. Between 1930 and 1933 fourteen Imperial eggs left Russia. Many of the eggs were sold to Armand Hammer, president of Occidental Petroleum and a personal friend of Lenin, whose father was founder of the United States Communist party, and Emanuel Snowman of the London antique dealers Wartski.

Of the sixty-nine known Fabergé eggs, only sixty-one have survived to the present day. The vast majority of them are housed in public museums, with the greatest number of them (thirty) existing in Russia. Of the fifty-four known Imperial eggs, only forty-six have survived.

Locations of the eggs

The largest gathering of Fabergé eggs, after the Kremlin Armoury's, was assembled by Malcolm Forbes, and displayed in New York City. The collection, totaling nine eggs, and including approximately 180 other Faberge objects d'art, was put up for auction at Sotheby's in February 2004 by Forbes' heirs. Before the auction even began the Forbes collection was purchased in its entirety by the oligarch Victor Vekselberg for a sum estimated between $90 and $120 million. The imperial eggs in the collection included the first egg, the Hen Egg and the famed Coronation Egg (featured in the 2004 film Ocean's 12.)[6]

In 2001 the Constellation was found at the Fersman Mineralogical Museum in Moscow, where it is currently on display. The egg is made of dark blue glass and is studded with diamonds. It is engraved with the star constellation of the day of Nicholas II's birth. It rests on a base made of quartz. The egg was supposed to have a silver rim around it, but lacks the original rim, clockwork motion and dial, as well as the larger part of the diamond stars, since it remained unfinished.[7]

The Karelian Birch egg was the second to last Fabergé egg made, before the Constellation. It was considered lost until 2001, when a private collector who had owned it since 1927 sold it to the State Historical Museum in Moscow. With the advent of the Bolshevik Revolution in 1917, the eggs were ultimately scattered throughout the world; some were lost or destroyed; others were later rediscovered and purchased by collectors.

The Karelian egg is made from birch panels set in a gold frame. The departure in design from previous eggs, which were far more ornate and gilded, was due to rising discontent with the monarchy and declining fortunes as a result of World War I. Its surprise was a miniature mechanical elephant, which could be wound with a small jewel-encrusted key.

Of the eight lost Imperial eggs, photographs only exist of two[9]—the 1903 Royal Danish, and the 1909 Alexander III Commemorative eggs.