The Edict of Nantes was issued on April 13, 1598, by King Henry IV of France to grant the Calvinist Protestants of France (also known as Huguenots) substantial rights in a nation still considered essentially Roman Catholic. The main concern was civil unity, and the Edict separated civil from religious unity, treated some Protestants for the first time as more than mere schismatics and heretics, and opened a path for secularism and tolerance. In offering general freedom of conscience to individuals, the edict offered many specific concessions to the Protestants, such as amnesty and the reinstatement of their civil rights, including the right to work in any field including for the State, and to bring grievances directly to the king. It marks the end of eight religious wars that tore apart the population of France during the second half of the sixteenth century.

The Edict aimed primarily to end the long-running, disruptive French Wars of Religion.[1] Additionally, Henry IV had personal reasons for supporting the Edict: prior to assuming the throne in 1589, he had espoused Protestantism, and he remained sympathetic to the Protestant cause following his coronation as King of France. He had converted to Catholicism only in 1593 in order to secure his position as king, supposedly saying "Paris is well worth a Mass." The Edict succeeded in restoring peace and internal unity to France, though it pleased neither party: Catholics rejected the apparent recognition of Protestantism as a permanent element in French society and still hoped to enforce religious uniformity, while Protestants aspired to parity with Catholics. "Toleration in France was a royal notion, and the religious settlement was dependent upon the continued support of the crown."[2]

Henrey IV believed that re-establishing royal authority in France necessitated a peaceful relationship between Protestants and Catholics, based on toleration enforced by the crown. Since royal troops could not be everywhere, Huguenots needed to be granted strictly circumscribed possibilities of self-defense.[3] 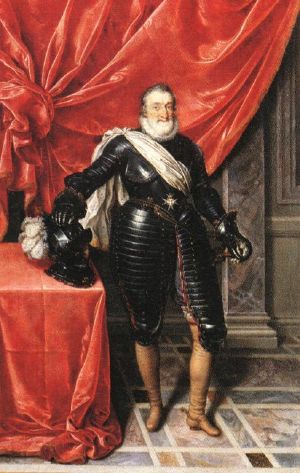 Henry IV of France by Frans Pourbus the younger.

The Edict of Nantes[4] that Henry IV signed comprised four basic texts, including a principal text made up of 92 articles and largely based on unsuccessful peace treaties signed during the recent wars. The Edict also included 56 "particular" (secret) articles dealing with Protestant rights and obligations. For example, the French state guaranteed protection of French Protestants travelling abroad from the Inquisition. "This crucifies me," protested Pope Clement VIII, upon hearing of the Edict. The final two parts consisted of brevets (letters patent), which contained the military clauses and pastoral clauses. These two brevets were withdrawn in 1629, by Louis XIII, following a final religious civil war.

The two letters patent supplementing the Edict[5] granted the Protestants places of safety (places de sureté), which were military strongholds such as La Rochelle, in support of which the king paid 180,000 écus a year, along with a further 150 emergency forts (places de refuge), to be maintained at the Huguenots' own expense. Such an act of toleration was unusual in Western Europe, where standard practice forced subjects to follow the religion of their ruler—the application of the principle of cuius regio, eius religio.

While it granted certain privileges to Protestants, the edict reaffirmed Catholicism as the established religion of France. Protestants gained no exemption from paying the tithe (the King engaged to support the Protestant ministers in part recompense) and had to respect Catholic holidays and restrictions regarding marriage. The authorities limited Protestant freedom of worship to specified geographic areas. The Edict dealt only with Protestant and Catholic coexistence; it made no mention of Jews, or of Muslims, who were offered temporary asylum in France when the Moriscos (Christian converts from Islam) were being expelled from Spain.[6]

The original Act which promulgated the Edict, has disappeared. The Archives Nationales in Paris preserves only the text of a shorter document modified by concessions extracted from the King by the clergy and the Parliment of Paris, which delayed ten months, before finally signing and setting seals to the document in 1599. A copy of the first edict, sent for safekeeping to Protestant Geneva, survives. The provincial parliments resisted in their turn; the most recalcitrant, the parliament of Rouen, did not unreservedly register the Edict until 1609.[7] 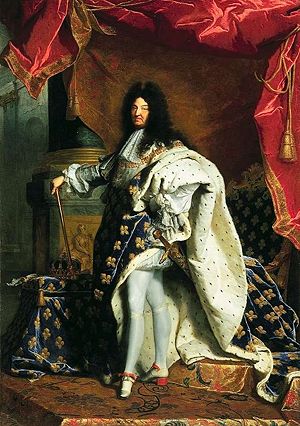 The Edict remained in unaltered effect, registered by the parliaments as "fundamental and irrevocable law," with the exception of the brevets, which had been granted for a period of eight years, and were renewed by Henry in 1606 and in 1611 by Marie de Médecis, who confirmed the Edict within a week of the assassination of Henry, stilling Protestant fears of another St. Bartholomew's Day massacre. The subsidies had been reduced by degrees, as Henry gained more secure control of the nation.[8] By the peace of Montpellier in 1622, concluding a Huguenot revolt in Languedoc, the fortified Protestant towns were reduced to two, La Rochelle and Montauban. The brevets were entirely withdrawn in 1629, by Louis XIII, following the Siege of La Rochelle, in which Cardinal Richelieu blockaded the city for fourteen months.

During the remainder of Louis XIII's reign, and especially during the minority of Louis XIV, the implementation of the Edict varied year by year, voiced in declarations and orders, and in case decisions in the Council, fluctuating according to the tides of domestic politics and the relations of France with powers abroad.[9]

In October 1685, Louis XIV, the grandson of Henry IV, renounced the Edict and declared Protestantism illegal with the Edict of Fontainebleau. This act, commonly called the Revocation of the Edict of Nantes, had very damaging results for France. While the wars of religion did not re-ignite, many Protestants chose to leave France, most moving to Great Britain, Prussia, the Dutch Republic, Switzerland and the new French colonies in North America. Huguenots also settled in South Africa. This exodus deprived France of many of its most skilled and industrious individuals, who would from now on aid France's rivals in Holland and England. The revocation of the Edict of Nantes also further damaged the perception of Louis XIV abroad, making the Protestant nations bordering France even more hostile to his regime. Upon the revocation of the edict, Frederick Wilhelm issued the Edict of Potsdam, which encouraged Protestants to come to Brandenburg.