This is an article about the non-vascular plants. The name Hornwort is also often applied to an aquatic plant Ceratophyllum demersum in the family Ceratophyllaceae.

Hornwort is the common name for any of the bryophytes, or non-vascular land plants, comprising the division Anthocerotophyta. The common name refers to the elongated horn-like structure, which is the short-lived sporophyte phase of the life cycle. The flattened, green plant body of a hornwort is the persistent, photosynthetic gametophyte phase. As an organism that undergoes a life cycle known as alternation of generations, hornworts are characterized by a reproductive cycle consisting of one of two separate, free-living organisms: the gametophyte, which is a multicellular structure that is genetically haploid, and a sporophyte, which is genetically diploid.

As bryophytes, along with mosses and liverworts, hornworts are members of the land plants (embryophytes) that are non-vascular, meaning that they lack or have poorly developed water- and food-conducting strands in their roots (xylem and phloem). They do not have roots, only filamentous rhizoids. Originally, the three groups—mosses (division Bryophyta), hornworts (division Anthocerotophyta), and liverworts (division Marchantiophyta)—were brought together as the three classes or three phyla within the division Bryophyta. However, they now are placed in separate divisions, while grouped together as bryophytes because of their similarity as non-vascular, land plants. Algae, which are aquatic plants, are also non-vascular.

Hornworts may be found worldwide growing primarily in places that are damp or humid. Some species grow in large numbers as tiny weeds in the soil of gardens and cultivated fields. Large tropical and sub-tropical species of Dendroceros may be found growing on the bark of trees.

Hornworts are important components of their ecosystems. They occupy a unique niche, helping to pioneer areas, stabilizing soil, and playing a role in nutrient recycling. They also serve as indicators of pollution. Furthermore, they offer aesthetic value with their intricacy and beauty, and their unique life cycle adds to the wonder of nature for people. Thus, hornworts exhibit bi-level functionality as they perform an important role in the ecosystem and enhance the human experience, while also advancing their own needs for survival and reproduction.

As bryophytes, hornworts have tissues and enclosed reproductive systems, but they reproduce through spores without either flowering or producing seeds. The ecologically persistent, photosynthetic phase of the life cycle is the haploid, gametophyte generation rather than the diploid sporophyte. Bryophyte sporophytes are very short-lived. They are attached to and nutritionally dependent on their gametophytes, and they consist of only an unbranched stalk, or seta, and a single, terminal sporangium (Crandall-Stotler and Stotler 2000; Crandall-Stotler et al. 2005). Bryophytes are typically small, herbaceous plants, growing closely packed in mats or cushions on rocks or soil, or as epiphytes on the trunks of trees.

The plant body of a hornwort—the haploid gametophyte stage—usually grows as a thin rosette or ribbon-like thallus between one and five centimeters in diameter. Each cell of the thallus usually contains just one chloroplast per cell. In most species, this chloroplast is fused with other organelles to form a large pyrenoid that both manufactures and stores food. This particular feature is very unusual in land plants, but is common among algae.

Many hornworts develop internal mucilage-filled cavities when groups of cells break down. These cavities are invaded by photosynthetic cyanobacteria, especially species of Nostoc. Such colonies of bacteria growing inside the thallus give the hornwort a distinctive blue-green color. There may also be small slime pores on the underside of the thallus. These pores superficially resemble the stomata of other plants.

The horn-shaped sporophyte grows from an archegonium embedded deep in the gametophyte. Hornwort sporophytes are unusual in that the sporophyte grows upward from meristemic tissue near its base, instead of from meristemic tissue near its tip as in the common pattern of plant growth. Unlike liverworts (Marchantiophyta), most hornworts have true stomata on the sporophyte as mosses do. The exceptions are the genera Notothylas and Megaceros, which do not have stomata.

When the sporophyte is mature, it has a multicellular outer layer, a central rod-like columella running up the center, and a layer of tissue in between that produces spores and pseudo-elaters. The pseudo-elaters are multi-cellular, unlike the elaters of liverworts. They have helical thickenings that change shape in response to drying out, twisting in ways that help to disperse the spores. Hornwort spores are relatively large for bryophytes, measuring between 30 and 80 µm in diameter or more. The spores are polar (i.e., having two distinctly different sides or ends) usually with a Y-shaped tri-radiate ridge on the proximal surface, and with a distal surface ornamented with bumps or spines.

The life of a hornwort starts from a haploid spore. In most species, there is a single cell inside the spore, and a slender extension of this cell called the germ tube germinates from the proximal side of the spore. The tip of the germ tube divides to form an octant of cells, and the first rhizoid (structure that functions like a root) grows as an extension of the original germ cell. The tip continues to divide new cells, which produces a thalloid protonema. By contrast, species of the family Dendrocerotaceae may begin dividing within the spore, becoming multicellular and even photosynthetic before the spore germinates. In either case, the protonema is a transitory stage in the life of a hornwort. 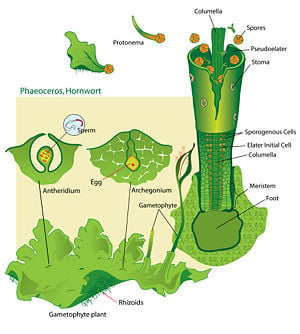 Life cycle of a typical hornwort Phaeoceros. Click on the image to enlarge.

From the protonema grows the adult gametophyte, which is the persistent and independent stage in the life cycle. This stage, which usually grows as a thin rosette or ribbon-like thallus, may be a few centimeters in diameter and several layers of cells in thickness. The gametophyte may be green or yellow-green from the chlorophyll in its cells, or bluish-green when colonies of cyanobacteria grow inside the plant.

When the gametophyte has grown to its adult size, it produces the sex organs of the hornwort. Most plants are monoicous, with both sex organs on the same plant, but some plants (even within the same species) are dioicous, with separate male and female gametophytes. The female organs are known as archegonia (singular archegonium) and the male organs are known as antheridia (singular antheridium). Both kinds of organs develop just below the surface of the plant and are only later exposed by disintegration of the overlying cells.

The biflagellate sperm must swim from the antheridia, or else be splashed to the archegonia. When this happens, the sperm and egg cell fuse to form a zygote, the cell from which the sporophyte stage of the life cycle will develop. Unlike all other bryophytes, the first cell division of the zygote is longitudinal. Further divisions produce three basic regions of the sporophyte.

At the bottom of the sporophyte (closest to the interior of the gametophyte), is a foot. This is a globular group of cells that receives nutrients from the parent gametophyte, on which the sporophyte will spend its entire existence. In the middle of the sporophyte (just above the foot), is a meristem that will continue to divide and produce new cells for the third region. This third region is the capsule. Both the central and surface cells of the capsule are sterile, but between them is a layer of cells that will divide to produce pseudo-elaters and spores. These are released from the capsule when it splits lengthwise from the tip.

Hornworts were traditionally considered a taxon within the Division Bryophyta, along with mosses and liverworts. However, it now appears that this group is paraphyletic, so the hornworts tend to be given their own division, called Anthocerotophyta.

Among land plants, hornworts appear to be one of the oldest surviving lineages; cladistic analysis implies that the group originated prior to the Devonian, around the same time as the mosses and liverworts. There are only about 100 species known, but new species are still being discovered. The number and names of genera are a current matter of investigation, and several competing classification schemes have been published since 1988.

A more recent study of molecular, ultrastructural and morphological data has yielded a new classification of hornworts (Duff et al. 2007), presented below: The hornwort Dendroceros crispus growing on the bark of a tree.