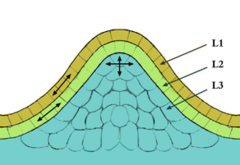 Tunica-Corpus model of the apical meristem (growing tip). The epidermal (L1) and subepidermal (L2) layers form the outer layers called the tunica. The inner L3 layer is called the corpus. Cells in the L1 and L2 layers divide in a sideways fashion which keeps these layers distinct, while the L3 layer divides in a more random fashion.

Meristem is a region of plant tissue consisting of undifferentiated or incompletely differentiated cells (meristematic cells) that are capable of cell division and growth and from which new cells are formed.

Differentiated plant cells generally cannot divide or produce cells of a different type. Therefore, cell division in the meristem is required to provide new cells for expansion and differentiation of tissues and initiation of new organs, providing the basic structure of the plant body. These meristematic cells are analogous in function to stem cells in animals.

Maintenance of the cells requires a balance between two antagonistic processes: organ initiation and stem cell population renewal. They have both the ability to renew themselves through mitotic cell division and the ability to differentiate into a diverse range of specialized cell types.

Cellular differentiation is the process by which a less specialized cell becomes a more specialized cell type. Differentiation occurs numerous times during the development of a multicellular organism as the organism changes from a single zygote to a complex system of tissues and cell types. A cell that is able to differentiate into many cell types is known as pluripotent. These cells are called stem cells in animals and meristematic cells in higher plants.

Meristematic cells are incompletely or not at all differentiated, and are capable of continued cellular division (youthful). Furthermore, the cells are small and protoplasm fills the cell completely. The vacuoles are extremely small. The cytoplasm does not contain differentiated plastids (chloroplasts or chromoplasts), although they are present in rudimentary form (proplastids). Meristematic cells are packed closely together without intercellular cavities. The cell wall is a very thin primary cell wall.

The term “meristem” was first used by Karl Wilhelm von Nägeli (1817-1891) from his book “Beiträge zur Wissenschaftlichen Botanik” in 1858. It is derived from the Greek word “merizein,” meaning to divide in recognition of its inherent function.

At the meristem summit there is a small group of slowly dividing cells that is commonly called the central zone. Cells of this zone have a stem cell function and are essential for meristem maintenance. The proliferation and growth rates at the meristem summit usually differ considerably from those at the periphery.

Apical meristems may differentiate into three kinds of primary meristem:

These meristems are responsible for primary growth, or an increase in length or height.

There are two types of secondary meristems. These are also called the lateral meristems because they surround the established stem of a plant and cause it to grow laterally (that is, larger in diameter). 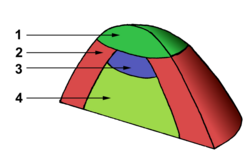 The apical meristem, or growing tip, is a completely undifferentiated meristematic tissue found in the buds and growing tips of roots in plants. Its main function is to begin growth of new cells in young seedlings at the tips of roots and shoots (forming buds, among other structures). Specifically, an active apical meristem lays down a growing root or shoot behind itself, pushing itself forward. Apical meristems are very small, compared to the cylinder-shaped lateral meristems.

Apical meristems are composed of several layers. The number of layers varies according to plant type. In general, the outermost layer is called the tunica while the innermost layers are the corpus. In monocots, the tunica determine the physical characteristics of the leaf edge and margin. In dicots, layer two of the corpus determine the characteristics of the edge of the leaf. The corpus and tunica play a critical part of the plant physical appearance as all plant cells are formed from the meristems. Apical meristems are found in two locations: The root and the stem. Some Arctic plants have a apical meristem in the lower/middle parts of the plant.

The source of all above-ground organs are shoot apical meristems (SAM). Cells at the SAM summit serve as stem cells to the surrounding peripheral region, where they proliferate rapidly and are incorporated into differentiating leaf or flower primordia.

The shoot apical meristem is the site of most of the embryogenesis in flowering plants. Primordia of leaves, sepals, petals, stamens, and ovaries are initiated here at the rate of one every time interval, called a plastochron. It is where the first indications that flower development has been evoked are manifested. One of these indications might be the loss of apical dominance and the release of otherwise dormant cells to develop as axillary shoot meristems—in some species in axils of primordia as close as two or three away from the apical dome. The SAM consists of 4 distinct cell groups:

The four distinct zones mentioned above are maintained by a complex signaling pathway. In Arabidopsis thaliana, three interacting CLAVATA genes are required to regulate the size of the stem cell reservoir in the SAM by controlling the rate of cell division (Fletcher 2002). CLV1 and CLV2 are predicted to form a receptor complex (of the LRR receptor like kinase family) to which CLV3 is a ligand (Clark et al. 1997; Jeong et al. 1999; Fletcher et al. 1999). CLV3 shares some homology with the ESR proteins of maize, with a short 14 amino acid region being conserved between the proteins (Cock and McCormick 2001; Oelkers et al. 2008). Proteins that contain these conserved regions have been grouped into the CLE family of proteins (Cock and McCormick 2001; Oelkers et al. 2008).

CLV1 has been shown to interact with several cytoplasmic proteins that are most likely involved in downstream signaling; for example, the CLV complex has been found to be associated with Rho/Rac small GTPase related proteins (Fletcher 2002). These proteins may act as an intermediate between the CLV complex and a mitogen-activated protein kinase (MAPK) that is often involved in signaling cascades (Valster et al. 2000). KAPP is a kinase-associated protein phosphatase that has been shown to interact with CLV1 (Stone et al. 1998). KAPP is thought to act as a negative regulator of CLV1 by dephosphorylating it (Stone et al. 1998). 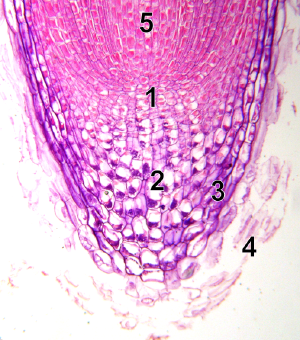 Unlike the SAM, the root apical meristem (RAM) produces cells in two directions. It is covered by the root cap, which protects the apical meristem from the rocks, dirt, and pathogens. Cells are continuously sloughed off the outer surface of the root cap. The center of the RAM is occupied by a quiescent center, which has low mitotic activity. Evidence suggests the quiescent center does function as the zone of initials. Infrequent division of initial cells in the quiescent center is the source of cells for the RAM. These initial cells and tissue patterns become established in the embryo in the case of the primary root and in the new lateral meristems in the case of secondary roots.

In angiosperms, intercalary meristems occur only in monocot (particularly grass) stems at the base of nodes and leaf blades. Horsetails also exhibit intercalary growth. Intercalary meristems are capable of cell division and allow for rapid growth and regrowth of many monocots. Intercalary meristems at the nodes of bamboo allow for rapid stem elongation, while those at the base of most grass leaf blades allow damaged leaves to rapidly regrow. This leaf regrowth in grasses evolved in response to damage by grazing herbivores, but is more familiar to many people in response to lawnmowers.

When plants begin the developmental process known as flowering, the shoot apical meristem is transformed into an inflorescence meristem, which goes on to produce the floral meristem, which produces the familiar sepals, petals, stamens, and carpels of the flower.

Through the years scientists have manipulated floral meristems for economic reasons. An example is the mutant tobacco plant "Maryland Mammoth." In 1936, the department of agriculture of Switzerland performed several scientific tests with this plant. "Maryland Mammoth" is peculiar in this sense that it grows much faster than other tobacco plants.

Apical dominance is the phenomenon where one meristem prevents or inhibits the growth of other meristems. As a result, the plant will have one clearly defined main trunk. For example, in trees the tip of the main trunk bears the dominant meristem. Therefore, the tip of the trunk grows fast and is not shadowed by branches. If the dominant meristem is cut off, one or more branch tips will assume dominance. The branch will start growing faster and the new growth will be vertical. Over the years the branch may begin to look more and more like an extension of the main trunk. Often several branches will exhibit this behavior after the removal of apical meristem, leading to a bushy growth.

Though each plant grows according to a certain set of rules, each new root and shoot meristem can go on growing for as long as it is alive. In many plants, meristematic growth is potentially indeterminate, making the overall shape of the plant not determinate in advance. This is the primary growth. Primary growth leads to lengthening of the plant body and organ formation. All plant organs arise ultimately from cell divisions in the apical meristems, followed by cell expansion and differentiation. Primary growth gives rise to the apical part of many plants.

Under appropriate conditions, each shoot meristem can develop into a complete new plant or clone. Such new plants can be grown from shoot cuttings that contain an apical meristem. Root apical meristems are not readily cloned, however.

This cloning is called asexual reproduction or vegetative reproduction and is widely practiced in horticulture to mass-produce plants of a desirable genotype. This process is also known as mericloning.