Historically, the Caucasus Mountain Range has served as a geographic barrier at the convergence of the continents of Europe and Asia. Because the tectonic plate is geologically stable in this region, it has been hard to determine the exact course of the continental borderline, causing the border to change throughout history. While there continues to be disagreement over where the border lies in relation to the range, there is a general acceptance of assigning the Caucasus to Asia due to the strong Asian influences throughout the region.

The Western Caucasus has been designated a UNESCO World Heritage Site based upon its diversity of geology, ecosystems and species. It is recognized as the "only large mountain area in Europe that has not experienced significant human impact, containing extensive tracts of undisturbed mountain forests unique on the European scale."

The Caucasus Mountains formed ca. 28.49–23.8 million years ago as the result of a tectonic plate collision between the Arabian plate moving northward with respect to the Eurasian plate. The mountain system forms a continuation of the Himalayas, which are being pressed upwards by a similar collision zone with the Eurasian and Indian plates. The entire region is regularly subjected to strong earthquakes from this activity, especially as the fault structure is complex with the Anatolia/Turkey and Iranian Blocks flowing sidewise, which prevents subduction of the advancing plate edge and hence the lack of volcanoes on the Greater Caucasus Mountain Range (although stratovolcanoes such as Mount Elbrus, Mount Kazbek, and others do exist). The Lesser Caucasus Mountains on the other hand, are largely of volcanic origin. The Javakheti Volcanic Plateau in Georgia and the surrounding volcanic ranges which extend well into central Armenia are some of the youngest and the most unstable geological features of the region.

There are large granite, gneiss, petroleum (estimated reserves: Up to 200 billion barrels) and numerous natural gas deposits found in the area.

Mountain systems within the Caucasus range

The Greater and Lesser Caucasus ranges are connected by the Likhi Range (Middle Range), which separates the Kolkhida Lowland from the Kura Depression (Kura Lowland). In the southeast are the Talysh Mountains. The Lesser Caucasus and the Armenian Highland constitute the Transcaucasian Highland. 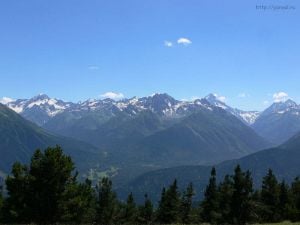 Mountainous landscape of Arkhyz in the Greater Caucasus range.

The Greater Caucasus is the major mountain range of the Caucasus Mountains system. It stretches from west-northwest to east-southeast, between the Taman Peninsula of the Black Sea to the Absheron Peninsula of the Caspian Sea: From the Caucasian Natural Reserve in the vicinity of Sochi on the northeastern shore of the Black Sea and reaching nearly to Baku on the Caspian.

This range is traditionally separated into three parts:

The border of Russia with Georgia and Azerbaijan runs along most of its length. The Georgian Military Road (Darial Gorge), Ossetian Military Road, and Trans-Caucasus Highway traverse this mountain range at altitudes of up to 3,000 meters.

The Western Caucasus has been designated a World Heritage Site under the criteria that "it is the only large mountain area in Europe that has not experienced significant human impact, containing extensive tracts of undisturbed mountain forests unique on the European scale."

The Lesser Caucasus is the second of the two main mountain ranges forming the Caucasus. It runs parallel to the Greater Caucasus, at a distance averaging about 100 km (60 mi) south and limits the Armenian Highland from the north and northeast.

It is connected to the Greater Caucasus by the Likh Range (Suram Range) and separated from it by the Kolkhida Lowland in the west and Kura Depression (by Kura River) in the east.

The borders of Georgia, Armenia, Azerbaijan, and Iran run through the range, although its crest does not usually define the border. 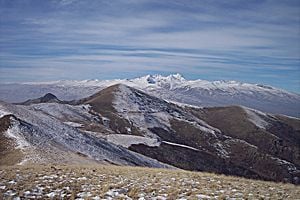 Mt. Aragats, in Armenia is the highest peak of the Lesser Caucasus Mountains

There is no clear agreement on whether the Caucasus Mountains are a part of Europe or Asia. Depending on the varying perspectives, Europe's highest mountain is either Mount Elbrus 5,642 m (18,510.5 ft) or Mont Blanc in the Alps, at the Italian-French border, with a height of 4,810 m (15,780.8 ft).

The Caucasus Mountains are located in the middle of the Eurasian plate between Europe and Asia. Because the plate is geologically stable in this region, it is hard to determine the exact course of the continental borderline. Therefore, throughout history the borderline has changed from one place to another. The ancient Greeks saw the Bosporus and the Caucasus Mountains as the border of Europe. Later this view changed several times for political reasons. In the Migration Period and the Middle Ages, the Bosporus and the river Don divided the two continents.

The border was historically defined by the Swedish military officer and geographer Philip Johan von Strahlenberg, who suggested the border follow the peaks of the Urals, and then the lower Emba and the coast of the Caspian Sea, before passing through the Kuma-Manych Depression, which lies 300 km north of the Caucasus Mountains. In 1730, this course was approved by the Russian Tsar and since that time has been adopted by many scientists. Following this definition, the mountains are a part of Asia and according to this view, the highest European mountain is Mont Blanc.

On the other hand, La Grande Encyclopédie clearly draws the border between Europe and Asia south of both Caucasian mountain ranges. Both Elbrus and Kazbek are here European mountains.

The table below lists some of the highest peaks of the Caucasus. With the exception of Shkhara, the heights are taken from Soviet 1:50,000 mapping. There are higher and more prominent, but nameless, peaks than some of the peaks included below. (The chart reports elevation and prominence in meters.) 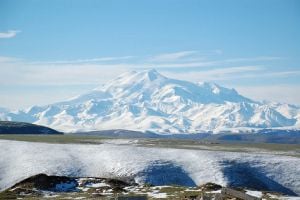 Mount Elbrus, the highest peak in the Caucasus Mountains. 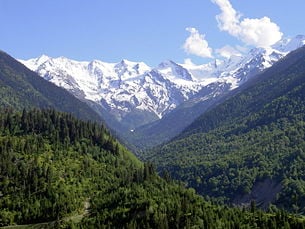 View of the Caucasus Mountains in Svaneti, Georgia

The climate of the Caucasus varies both vertically (according to elevation) and horizontally (by latitude and location). Temperature generally decreases as elevation rises. Average annual temperature in Sukhumi, Abkhazia at sea level is 15 degrees Celsius while on the slopes of Mount Kazbek at an elevation of 3,700 meters, average annual temperature falls to -6.1 degrees Celsius. The northern slopes of the Greater Caucasus Mountain Range are 3 degrees (Celsius) colder than the southern slopes. The highlands of the Lesser Caucasus Mountains in Armenia, Azerbaijan, and Georgia are marked by sharp temperature contrasts between the summer and winter months due to a more continental climate.

The Caucasus Mountains have a varied landscape which mainly changes vertically and according to the distance from large bodies of water. The region contains biomes ranging from subtropical low-land marshes/forests to glaciers (Western and Central Caucasus) as well as highland semideserts/steppes and alpine meadows in the south (mainly Armenia and Azerbaijan). 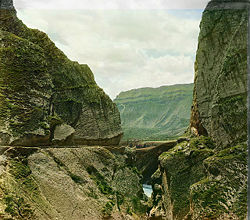 A Gorge in Chechnya, Russia.

The northern and western slopes of the Lesser Caucasus Mountains are characterized both by Colchian and other deciduous forests at lower elevations while mixed and coniferous forests (mainly spruce and fir) dominate at higher elevations. Beech forests are also common at higher elevations. The southern slopes of the Lesser Caucasus Mountains are largely covered by grasslands and steppes up to an elevation of 2,500 meters. The highest areas of the region contain alpine grasslands as well.

Volcanic and other rock formations are common throughout the region. The volcanic zone extends over a large area from southern Georgia into Armenia and southwestern Azerbaijan. Some of the prominent peaks of the region include Mt. Aragats, Didi Abuli, Samsari, and others. The area is characterized by volcanic plateaus, lava flows, volcanic lakes, volcanic cones, and other features. The Lesser Caucasus Mountains lack the type of glaciers/glacial features that are common on the Greater Caucasus Mountain Range.

Retrieved from https://www.newworldencyclopedia.org/p/index.php?title=Caucasus_Mountains&oldid=968763
Categories:
Hidden category:
This page was last edited on 25 April 2013, at 22:28.
Content is available under Creative Commons Attribution/Share-Alike License; additional terms may apply. See Terms of Use for details.