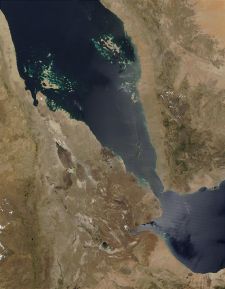 MODIS satellite image of the Afar Depression and surrounding regions of the Red Sea, Gulf of Aden, Arabia, and the Horn of Africa

The Afar Depression (also called the Afar Triangle, the Danakil Depression, or the Denakil Plain) is a geological depression in the Horn of Africa, where it overlaps Eritrea and the Afar Region of Ethiopia, and slightly touches Djibouti and Somalia. Live volcanoes (the "Denakil Alps") separate it from the Red Sea. Nomadic pastoralists, related to the Afar people of Djibouti, are virtually the plain’s only inhabitants.

The Afar Depression is a formidable landscape which includes the Danakil Desert and the lowest point in Africa, Lake Asal, less than 155 meters (510 ft) below sea level. Dallol, Ethiopia is also part of the Depression, one of the hottest places year round anywhere on Earth. The only river that flows into the Depression is the Awash River, which ends in a chain of salt lakes, where its water evaporates as quickly as it is supplied. About 1,200 square kilometers (460 sq mi) of the Afar Depression is covered by salt, and salt mining remains a major source of income for many Afar tribes, who cut the salt into bars and carry it by mule to other parts of Ethiopia and Eritrea.

The Afar Depression is well known as one of the cradles of hominids with the oldest bones discovered in the world having come from this area. The Middle Awash is the site of many fossil hominid discoveries; Gona, site of the world's oldest stone tools; and Hadar, site of "Lucy," the famous fossilized specimen of Australopithecus afarensis.

The Afar Depression results from the presence of a tectonic triple junction (the Afar Triple Junction) where the spreading ridges that are forming the Red Sea and the Gulf of Aden emerge on land and meet the East African Rift. The central meeting place for these three pieces of Earth's crust is around Lake Abbe. The Afar Depression is one of two places on Earth where a mid-ocean ridge can be studied on land, the other being Iceland.

In the Depression, the earth's crust is slowly rifting apart at a rate of 1 to 2 centimeters (0.3–0.8 in) per year along each of the three rifts which form the "legs" of the triple junction. The immediate consequence of this is that there are a continuous sequence of earthquakes, fissures hundreds of meters long and deep appearing in the ground, and the valley floor sinking as much as 100 meters. Between September and October 2005, 163 earthquakes of magnitudes greater than 3.9 and a volcanic eruption occurred within the Afar rift. 2.5 cubic kilometers of molten rock was injected into the plate along a dyke between depths of 2 and 9 km, forcing open an 8 meter wide gap on the surface.[1]

Over millions of years, geologists expect the Red Sea to erode through the highlands surrounding the Afar Depression and flood the valley. In about 10 million years, geologists predict that the whole 6,000 km length of the East African Rift will be submerged, forming a new ocean as large as the Red Sea is now. At that point, Africa will have lost its horn.[2]

The floor of the Afar Depression is composed of lava, mostly basalt. One of Earth's great active volcanoes, Erta Ale, is found here. The Afar Depression is, in the views of some geologists, underlain by a mantle plume, a great upwelling of mantle that melts to yield basalt as it approaches the surface. 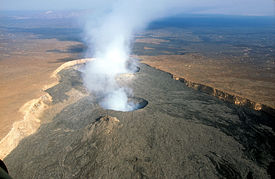 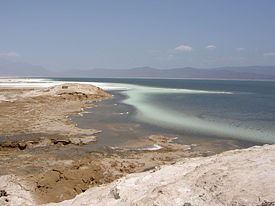 Lake Assal, with the salt pan on the left. 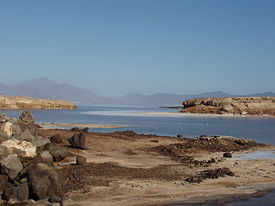 The lowlands of the Afar Depression are dominated by heat and drought. There is no rain for most of the year, and yearly rainfall averages range from 100 to 200 millimeters (4 to 7 in), with less rain falling closer to the coast. The settlement of Dallol in northern Ethiopia holds the record high average temperature for an inhabited location on Earth, where an average annual temperature of 34°C (94°F) was recorded between the years 1960 and 1966. Dallol is also one of the most remote places on Earth. There are no roads; the only regular transport service is provided by camel caravans which travel to the area to collect salt. Nearby is the Dallol volcano, which last exploded in 1926.

The Awash River, flowing northeastward through southern Afar, provides a narrow green belt and enables life for the flora and fauna in the area and for the Afars, the nomadic people living in the Danakil desert. The Awash River, contained completely within the boundaries of Ethiopia, is the only river that flows into the Depression. It is the principal stream of an endorheic drainage basin covering parts of the Amhara, Oromia and Somali Regions, as well as the southern half of the Afar Region.

About 128 kilometers (79 miles) from the Red Sea, the Awash ends in a chain of salt lakes, where its water evaporates as quickly as it is supplied. About 1200 km² (463 sq mi) of the Afar Depression is covered by salt, and salt mining is still a major source of income for many Afar tribes.

The Middle Awash is an archaeological site along the Awash River. A number of Pleistocene and late Miocene hominid remains have been found at the site, along with some of the oldest known Olduwan stone artifacts and patches of fire-baked clay. The Middle Awash contains the site of Hadar, where Australopithecus afarensis, including the famous "Lucy" partial skeleton and the "First Family" were discovered. Not only hominids, but also elephantoids, crocodiles and hippopotamus remains have been found in this region.

Also within the Afar Depression is the Danakil Desert, which lies in northeastern Ethiopia and in southern Eritrea and much of Djibouti. The Danakil's main industry is salt mining, while it is also home to wildlife, including African wild asses.

The desert is the homeland of the Afar people, the majority of whom have remained nomadic pastoralists, raising goats, sheep, and cattle in the desert. During the dry season, most move to and camp on the banks of the Awash River. Camels comprise the most common means of transportation as the Afar nomads move from watering hole to watering hole. With the arrival of the rainy season in November, most relocate to higher ground in order to avoid both flooding and mosquitos.

Lake Assal is a crater lake in central Djibouti, located at the southern border of Tadjoura Region, touching Dikhil Region, some 120 km (75 mi) west of Djibouti city. It lies 155 m (515 ft) below sea level; its shores comprise the lowest point on land in Africa.

Lake Assal is one of the most saline bodies of water on the earth, with a 34.8 percent salt concentration (up to 40 percent at 20 m (66 ft) depth). The sources of the lake are hot springs whose salinity is close to sea water, which are fed by the Gulf of Tadjoura, the eastern extension of the Gulf of Aden, specifically the nearly closed-off bay Ghoubet Kharab, about 10 km southeast of the lake.

The lake area is wild and desert-like, and no fauna or flora can be seen in the syrupy waters of the lake. The high temperature of the water (33-34 °C) favors evaporation, and it is surrounded by a salt pan which extends west and mainly northwest. The salt is mined and transported by caravan to Ethiopia.

Camel caravan on the shores of Lake Assal.

The Afar Depression biome is characterized as desert scrubland. Vegetation is mostly confined to drought-resistant plants such as small trees like species of the dragon tree, shrubs, and grasses.

In the southern part of the plain, in Ethiopia, lies the Mille-Sardo Wildlife Reserve, which was established 1973. The reserve covers 3,385 square miles (8,766 square km).