Squash (plural squash or squashes) is the common name used for four species in the genus Cucurbita of the gourd family Cucurbitaceae: C. pepo, C. maxima, C. mixta, and C. moschata. These plants, which originated in the Americas, are tendril-bearing plants characterized by hairy stems, unisexual flowers, and a fleshy fruit with a leathery rind that is a type of false berry called a pepo. The name squash also is used for the edible fruit of any of these plants, which can vary considerably in shape, color, and size and is consumed as a vegetable.

Although originating in the Americas, squash are now grown in most countries. While squash tend to be quite nutritious, with high levels of vitamins A and C, niacin, riboflavin, and iron, their attraction to humans extends beyond this to more internal and aesthetic values. Their great variety in colors, color patterns, and shapes—from light green or white to deep yellow, orange, and dark green, from solid to striped, and from flattened to cylindrical to crookneck varieties—combined with their special aroma and taste, offers humans a unique visual and culinary experience.

The four species of squash belong to the Cucurbitaceae, a flowering plant family commonly known as gourds or cucurbits and including crops like cucumbers, luffas, melons, and watermelons. The family is predominantly distributed around the tropics, where those with edible fruits were among the earliest cultivated plants in both the Old and New Worlds. The Cucurbitaceae is sometimes known as the gourd family and sometimes as the squash family. 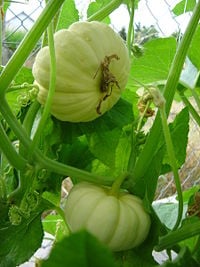 Squashes grow hanging from a network of stalks.

Most of the plants in this Cucurbitaceae family are annual vines, but there are also woody lianas, thorny shrubs, and trees (Dendrosicyos). Many species have large, yellow or white flowers. The stems are hairy and pentangular. Tendrils are present at 90 degrees to the leaf petioles at nodes. (In botany, a tendril is a specialized stem, leaf, or petiole with a threadlike shape that is used by climbing plants for support and attachment, generally by twining around whatever it touches.) Leaves are exstipulate, alternate, simple palmately lobed or palmately compound. The flowers are unisexual, with male and female flowers usually on different plants (dioecious), or less common on the same plant (monoecious). The female flowers have inferior ovaries. The fruit is often a kind of berry called a pepo. The pepo, derived from an inferior ovary, is characteristic of the Cucurbitaceae.

Squashes generally refer to four species of the genus Cucurbita native to the New World, also called marrows depending on variety or the nationality of the speaker. Archaeological evidence suggests that squash may have been first cultivated in Mesoamerica some 8,000 to 10,000 years ago (Roush 1997; Smith 1997), but may have been independently cultivated elsewhere, albeit later (Smith 2006). Squash was one of the "Three Sisters" planted by Native Americans. The Three Sisters were the three main indigenous plants used for agriculture: Maize (corn), beans, and squash. These were usually planted together, with the cornstalk providing support for the climbing beans, and shade for the squash. The squash vines provided ground cover to limit weeds. The beans provided nitrogen fixing for all three crops. 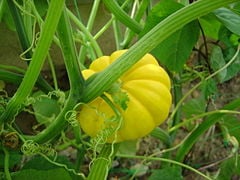 The English word "squash" derives from askutasquash (literally, "a green thing eaten raw"), a word from the Narragansett language. This was documented by Roger Williams, the founder of Rhode Island, in his 1643 publication A Key Into the Language of America. Similar words for squash exist in related languages of the Algonquian family such as Massachusett.

The squash fruit is classified as a pepo by botanists, which is a special type of epigynous berry with a thick outer wall or rind formed from hypanthium tissue fused to the exocarp; the fleshy interior is composed of mesocarp and endocarp. (An epigynous berry, or false berry, is an accessory fruit found in certain plant species with an inferior ovary, distinguishing it from a true berry. In these species other parts of the flower can ripen along with the ovary, forming the false berry.)

There is great variety in the size, shape, and color of squash fruit, with shapes including flattened and cylindrical forms, and squash with straight and crooked necks. Colors may be white, green, yellow, and with stripes or solid colors. 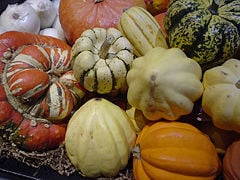 Summer squash is the category that includes those squash harvested during the growing season, while the skin is still tender and the fruit relatively small. They have soft seeds and thin, edible skins, and tender flesh with a high water content (Herbst 2001). Summer squash is very perishable and may last only five days even when refrigerated in a plastic bag (Herbst 2001). They are consumed almost immediately after harvesting and require little or no cooking. Summer varieties include young vegetable marrows such as zucchini (also known as courgette), pattypan, and yellow crookneck).

Winter squash is the category for those squash harvested at maturity, generally the end of summer, cured to further harden the skin, and stored in a cool place for eating later. Winter squash have thick and hard seeds and skin, and flesh that is firmer (Herbst 2001). Winter squash, protected by its hard skin, can be stored much longer and does not require refrigeration, lasting a month or more in a cool dark place depending on the variety (Herbst 2001). They generally require longer cooking time than summer squashes. Winter varieties include butternut, Hubbard, buttercup, ambercup, acorn, spaghetti squash, and pumpkin) (Note: Although the term "winter squash" is used here to differentiate from "summer squash," it is also commonly used as a synonym for Cucurbita maxima.) 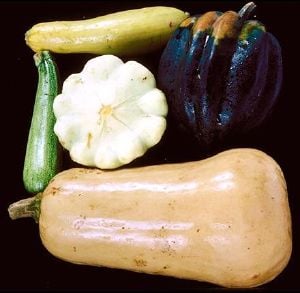 Four species of the genus Cucurbita are called squash or pumpkins rather indiscriminately.

While squashes and pumpkins are notorious for producing hybrids when grown within pollinator range of each other; the different species do not naturally hybridize with each other. 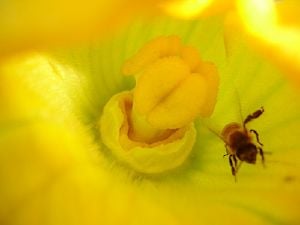 As with all other members of the family, the flowers come in pollen-bearing male form and the ovary-bearing female form, with both forms being present on the plant. Squash has historically been pollinated by the native North American squash bee Peponapis pruinosa, and related species. However, this bee and its relatives have declined, probably due to pesticide sensitivity, and most commercial plantings are pollinated by European honey bees today.

One hive per acre (4,000 m² per hive) is recommended by the United States Department of Agriculture. Gardeners with a shortage of bees often have to hand pollinate. Inadequately pollinated female squash flowers will usually start growing but abort before full development. Many gardeners blame various fungal diseases for the aborted fruit, but the fix proves to be better pollination, not fungicide.

Though considered a vegetable in cooking, botanically speaking, squash is a fruit (being the receptacle for the plant's seeds), and not a vegetable.

Use as an object of art 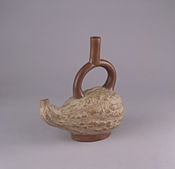 The squash has been an essential crop in the Andes since the pre-Columbian era. The Moche culture from Northern Peru made ceramics from earth, water, and fire. This pottery was a sacred substance, formed in significant shapes and used to represent important themes. Squash are represented frequently in Moche ceramics (Berrin and Larco 1997).