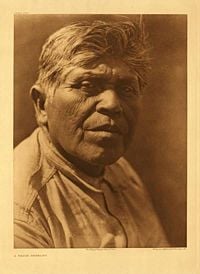 The Serrano are a Native American tribe of Southern California. They refer to themselves as the Yuhaviatam, which means "people of the pines." The Serrano historically populated the San Bernadino Mountains and extended down to the Mojave River region down to the Tejon Creek.

When Europeans arrived they brought great change to this people. The Spanish missionaries forced Christianity, the English language, and a different lifestyle, as well as devastating new diseases. The California Gold Rush brought more settlers who displaced the Serrano and threatened their livelihood. Those who survived left the mountains and settled in the valley, establishing their own reservation.

Today, the Serrano are working to preserve their heritage, their belief in the use of natural resources to provide all their needs. Their traditional culture appreciates each aspect of nature—trees, water, animals, birds, and their habitat. Through their basketmaking, music, and language, they hope to encourage a sustainable and harmonious lifestyle not only for themselves but for all who care to embrace it with them.

The Serrano people originally lived in the Mojave River and San Bernadino Mountains of Southern California. The Spanish explorers and missionaries called them Serrano meaning highlanders, but they refer to themselves as Yuhaviatam, the "People of the Pines."

Members of the Serrano tribe are part of the Shoshonean subset of the Uto-Aztecan group of Native Americans. They were an offshoot of the Takic people that arrived in Southern California around 2,500 years ago. Their neighbors included the Tataviam, the Kitanemuk in the north, and the Cahuilla to the south.

Estimates for the pre-contact populations of most native groups in California have varied substantially. Alfred L. Kroeber (1925) put the combined 1770 population of the Serrano, Kitanemuk, and Tataviam at 3,500 and the Serrano proper at 1,500. Lowell John Bean suggested an aboriginal Serrano population of about 2,500 (Bean and Smith 1978).

After first contact, Spanish soldiers invaded Serrano villages and removed the people, placing them in the missions. The term Mission Indians applied to the Serrano and other tribes originates from the missions established by the Spanish along the coast of California between 1769 and 1823. The Serrano revolted against the missions along with the Cahuilla and Yuma tribes in 1812. In 1834, many Serrano were forcibly relocated to the missions. Many died in the missions as a result of disease. They suffered devastating smallpox outbreaks in both 1840 and 1860.

The California Gold Rush of 1849 brought dramatic changes to the region. The influx of settlers, whose mining, farming, and logging changed the lands, disrupted the traditional lifestyle of indigenous people including the Serrano, and threatened their very survival.

In 1866, militia forces from San Bernardino killed Serrano men, women, and children in a 32-day campaign. Yuhaviatam tribal leader Santos Manuel (from whom the name San Manuel Band of Mission Indians comes) led the remaining Yuhaviatam from the mountains to the safety of the valley floor. Their reservation was established in 1891.

San Bernardino's earliest known inhabitants were the Serrano (Spanish for "people of the mountains") who spent their winters in the valley, and their summers in the cooler mountains. Towns in the area bear the names of their settlements—Yucaipa, Cucamonga, and Muscupiabe.

The Serrano looked to nature to provide the necessities of their lives—shelter, food, clothing, and plants for medicine. They lived in wickiups, circular structures which measured 12 feet (3.7 m) to 14 feet (4.3 m) across, constructed with willow framing and tule thatching.constructed with willow framing and tule thatching. They were built in an area that had been excavated as much as 2 feet (0.61 m). A pit lined with stones was dug in the center to serve as the fireplace.

Their villages consisted of ten to thirty such structures that the Spanish named rancherías. They crafted baskets and vessels with mother-of-pearl inlays which were often traded to the native people in the Santa Barbara region. The men did not wear clothing and the women wore deerskin, otter, and rabbit furs. Traditionally Serrano were divided into two moieties, with exogamous marriage (marriage to a member of the other group). Members of the village would gather for singing, dancing, and telling stories such as their creation myths.

The Serrano that inhabited the San Bernadino mountains would go to the valleys of Apple Valley and Lucerne during the winter and the area in and around Big Bear Lake during the summer. They hunted small game like rabbits utilizing traps along with bows and arrows. They did not hunt the grizzly bears, which they believed were reincarnations of their ancestors' spirits.

Their diet consisted of the game that they caught as well as pinon nuts ground into a dough and made into a flat tortilla like food. They also ate acorns, ground to make a flour and cooked into a type of porridge called Wiich. Other staples were roasted agave, prickly pears, and Yucca blossoms. 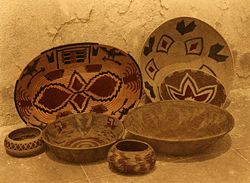 The Serrano have always been skilled craftsmen, experts in basketweaving. Their baskets, made from juncus rushes, deergrass, and yucca fiber, can be woven so tightly that water can be carried in them. They are also durable enough to be used for cooking. Pottery has also been a traditional craft. Serrano baskets and pottery are both imaginative in their decoration.

Singing has also played an important role in Serrano life. They do not use drums but rather rattles made from gourds. These rattles contain seeds which make percussive sounds when shaken.

Serrano traditional narratives include myths, legends, tales, and oral histories. Serrano oral literature is closely linked with the traditions of the Serrano's closest linguistic relatives, the Takic-speaking groups to their south, as well as with the traditions of the Yuman-speaking groups. These relationships are particularly evident in the sharing of the distinctive Southern California Creation Myth.

The Serrano creation story tells how Kruktat, the creator, lay ill and dying in the mountains, tended by the first people. When the creator died the people mourned and their tears turned into pine trees. The nuts from the trees became food for the Serrano. Those who lived at Yuhaviat, an area of pines near Big Bear Lake where the creator died, were called the Yuhaviatam, or the People of the Pines.

The grizzly bear was held in deep reverence, regarded as an ancestor. The Serrano never ate bear meat, nor used their furs. Ceremonies were held to to honor the dead, fiestas with food, gifts, ritual singing and dancing, that lasted for several days. They cremated their dead, rather than burying them, and burned their possessions. A location near Big Bear City contains petroglyphs on the rocks and artifacts indicating its use as a ceremonial ground.

The San Manuel Band of Mission Indians in Highland, California are contemporary Serrano. Many of the residents of the Morongo Reservation, some 30 miles (48 km) away, although predominantly Cahuilla, are also of Serrano descent.

Few people today speak the Serrano language, and few traditional rituals survive. However, believing that the foundation for their future lies in their past, many efforts have been made to revive interest in the traditional culture.

The San Manual Band turned to gaming to create jobs and generate revenue. Beginning with bingo in 1986, the tribe obtained government revenue and expanded the enterprise in 1994, to include a 100,000 square foot casino including a card room and slot machines. Further expansion followed and by 2008, the San Manuel Indian Bingo and Casino employed over 2,500 people. Based on this success, the San Manuel Band of Mission Indians has made great improvements in their community, working to overcome the problems of unemployment, alcohol and drug abuse, and low educational achievement (Marquez 2005).

The San Manuel Band enacted an education ordinance providing tuition and other support for members to pursue their education. Health care has been dramatically improved from the days still recalled by tribal elders when once a month a medical doctor made a stop on their reservation. In the 1970s, a small clinic was established and a larger facility was available on the Morongo Reservation. Today, a comprehensive health care plan is available as well as encouragement for preventive measures, including the building of a fitness facility in the community center on the reservation (Marquez 2005).

Efforts have also been made to preserve traditional culture and language. A spring celebration, Yaamar'a, is held each year. A language program has been instituted to teach the language to young tribal members, and many educational materials have been developed to assist the teaching of tribal history and culture (Edwards 2006). The Cahuilla have shared their traditional bird songs with the Serrano. These songs derive their name from the migration of birds, telling the story of creation, animals seen along the path, and sacred places they pass. Such songs are now sung at social and cultural events. An annual three-day pow-wow is held at California State University San Bernadino in October. This event includes competitions for dancing, drumming, and singing, and is open to all, Serrano, Native Americans of other tribes, and others alike.

Retrieved from https://www.newworldencyclopedia.org/p/index.php?title=Serrano_(people)&oldid=1098037
Categories:
Hidden category:
This page was last edited on 26 January 2023, at 10:04.
Content is available under Creative Commons Attribution/Share-Alike License; additional terms may apply. See Terms of Use for details.