Saint Jean-Baptiste de La Salle (born April 30, 1651 in Reims; died April 7, 1719 in Saint-Yon, Rouen) was a French priest and educational reformer, who dedicated more than 40 years of his life to the education of the children of the poor. He was founder of the Institute of the Brothers of the Christian Schools, an international educational movement, whose order is commonly known as the Christian Brothers.

In the process, he pioneered modern educational practices that eventually became standard throughout France. A strong proponent of reading and universal education, he put an end to the tradition of teaching reading in Latin, using the vernacular language familiar to young learners, among other reforms. He also wrote inspirational meditations on the ministry of teaching (along with catechisms, politeness texts, and other resources for teachers and students), and became the catalyst and resource for many other religious congregations dedicated to education that were founded in the eighteenth and nineteenth centuries.

De La Salle was ordained to the priesthood in 1678, beatified in 1888, and canonized by Pope Leo XIII in 1900. He was proclaimed Patron of Christian Teachers by Pope Pius XII in 1950.

John Baptiste de La Salle was the eldest child of Louis de La Salle and Nicolle de Moet de Brouillet. His parents were very involved in the moral and intellectual development of their child. After due preparation, he was sent to the College des Bons Enfants, where he pursed higher studies and, on July 10, 1669, he received a Master of Arts degree. His father hoped that John Baptist would maintain the family tradition and undertake the profession of law, but young de La Salle insisted that he was called to serve the Church, and accordingly, he received the tonsure on March, 11, 1662, and was solemnly installed as a canon [priest of the metropolitan See of Reims, on January 7, 1667.

He was ordained to the priesthood at the age of 27. Two years later, he received a doctorate in theology. He would later leave his position as canon priest at Reims and found a religious community devoted to teaching, distributing his fortune to the poor during a particularly harsh winter.

During his work as a priest, he increasingly became involved with helping the common people. One way in which this desire to help the common man manifested itself was his involvement with a group of poor and relatively uneducated men, who wished to help with the teaching of poor boys. This involvement began when, in March of 1679, he met Adrien Nyel, a committed educator of the poor who provided them with many services. This man quickly convinced La Salle to help him with his mission. His involvement increased until he eventually became the leader of the project. De La Salle was impressed by the deplorable conditions in which these impoverished people lived. To him, they seemed "far from salvation."

De La Salle became involved in education little by little, without ever consciously setting out to do so. What began as a charitable effort to help Nyel organize a group of marginally competent teachers in La Salle's hometown gradually became his life's work. In his own words, one decision led to another until he found himself doing something that he had never anticipated.

He renounced both his wealth and his position of canon at the local church. He thought that not having these material possessions would make him better able to connect with his students. He soon abandoned his family home and moved in with the teachers. This educational venture led to the founding, in 1680, of a new order, the Institute of the Brothers of the Christian Schools, also known as the De La Salle Christian Brothers, and, especially in the United States, the Christian Brothers. His schools stressed practical skills and religious instruction rather than classical education. La Salle also pioneered teacher training colleges. His books on [piety]] and on teaching methods were widely read.

His new order met with a great deal of resistance from local authorities, as well as from other, more established educational institutions. The Catholic Church initially rejected the creation of a new order, and other schools resented the methods that he used: new forms of teaching, and free education for all.

He gave his institute a distinctive character, that of a teaching body, consecrated to the work of popular education. Thus, he became the author of a system of pedagogy that included the essential principles adopted by later workers in the field of educational reforms.

Another of his methods was teaching in the vernacular. Most schools, especially religious ones, were taught almost entirely in Latin. In making the vernacular the basis of all instruction, de La Salle appealed to the intelligence of the child, prepared the way for the study of national literature, and opened up to the grown man those avenues of real knowledge and delight that had hitherto been closed against the eager multitude. With true scientific insight, he perceived the absurdity of retaining Latin texts to teach the art of reading.

De La Salle stressed that reading is one of the most efficacious means of acquiring knowledge. With due care in the selection of books, children who can read in the vernacular could spread the Christian doctrine in the family circle, and, on evenings, read some useful or instructive books to the assembled household; whereas, if they could read the Latin only, without understanding it, they would be deprived of many valuable benefits resulting from the intelligent reading of a good book.

He embraced all classes, all conditions of society. By making the free schools popular, he grasped the growing needs of society in his own day and for all times. No phase of the educational problem escaped his penetrating vision.

De la Salle also created a new boarding college at Saint-Yon, wherein he inaugurated the system of modern secondary instruction. Saint-Yon became the type of all such colleges, and that of Passy, Paris, became the modern exemplar of similar institutions in France and elsewhere.

Another educational innovation of de La Salles' was the transformation of the concept of Sunday school to the Christian Academy for adults in the parish of Saint-Sulpice, which he founded in 1699. It had a different character, the first of its kind in the history of education. The program of this academy included not only the ordinary branches taught in the other Sunday schools, but it added geometry, architecture, and drawing.

The last years of de La Salle were spent in close retirement at Saint-Yon. There he revised his educational rules before giving them to Brother Barthélemy, the first superior general of the Christian Brothers. During the last days of his life he showed the same spirit of sacrifice that had marked his earlier years. In Holy Week of 1719, he gave unmistakable signs that the end was near. On Holy Thursday, at the request of Brother Barthélemy, he blessed the brothers assembled at his bedside, and gave them his last words of counsel. His final words were: "In all things I adore the will of God in my regard."

According to Saint John Baptist de La Salle, teachers are the "ambassadors of Christ" and "ministers of grace." He believed that teachers have a providential and privileged relationship with their students. 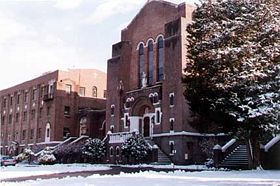 The Unification Theological Seminary in Barrytown, New York, was once a Christian Brothers School.

La Salle was a pedagogical thinker of note and is among the founders of a distinctively modern pedagogy. In 1685, La Salle founded what is generally considered the first normal school—that is, a school whose purpose is to train teachers—in Reims.

The second period of upheaval began in 1904 when France began to enact a series of "secularization laws." These laws essentially expelled most Catholic religious teachers from France and forced the closing of schools. The Christian Brothers left France to continue work overseas, notably in Belgium, Canada, and Spain as well as Argentina, Ecuador, Egypt, Brazil, Panama, Mexico, North Africa, and Australia.

Currently, about 6,000 Christian Brothers and 75,000 lay and religious colleagues worldwide serve as teachers, counselors, and guides to 900,000 students in over 1,000 educational institutions in as many as 84 countries, carrying out the work of the founder into the twenty-first century. The community is headed by a Superior General with the assistance of a General Council.

The network of schools that he created, now known as La Sallian Schools, still exist today, in many countries around the world. The schools are primarily high schools and universities. After prayer; students at these schools still often say, "St. John Baptist de La Salle, pray for us. Live Jesus in our hearts, forever." The lines "St. John Baptist de La Salle" and "live Jesus in our hearts", are said by the prayer leader, and "pray for us," and "forever" are recited by the students.

He was canonized by Pope Leo XIII on May 24, 1900 and his feast is celebrated in the Catholic Church calendar on April 7, and at La Sallian institutions on May 15. He was proclaimed the Patron Saint of Teachers in 1950 by Pope Pius XII.