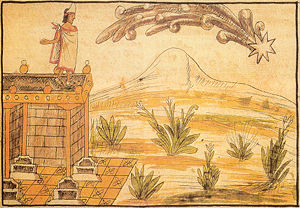 Montezuma atop his tall house facing the Great Spirit

Montezuma was the name of a hero-god in the mythology of certain Indian tribes of the Southwest United States, notably the Tohono O'odham and Pueblo peoples. Montezuma appears as a Noah figure in the culture, in communication with a supreme deity referred to as Great Spirit. Montezuma's legend parallels that of the Judeo-Christian biblical figures.

Legends associated with Montezuma have also been taken to predict the Spanish conquest of the Americas. It is difficult not to speculate that a more interconnected world may have existed at a much earlier period than historians normally accept, given the presence of flood stories in various parts of the world. The similarity with the Biblical Babel narrative, too, and the idea of humanity having had a common language that was lost, is also striking. Montezuma is a somewhat ambiguous figure, neither good nor evil but a mix of both. He is subservient to the Great Spirit. Like humanity, he is a full of hubris, attempting to be what he is not.

In the Tohono O'odham legend, at the beginning of time the Great Spirit finds clay by digging a hole; he then drops the clay into the hole again and out comes Montezuma, who assists him in bringing out all the Indian tribes, with the Apache last of all. According to legend, it is said that all men and animals were speaking a common language in the early days; however a great flood destroyed everyone, with only Montezuma and his friend, Coyote, escaping. Because Coyote had warned him of the flood beforehand, Montezuma had fashioned a boat that he kept prepared on the peak of the Santa Rosa Mountains in Arizona. Coyote likewise made a boat for himself, by gnawing down a giant cane and stopping it with gum.

After the flood had subsided, Montezuma and Coyote meet again atop Monte Rosa, and Montezuma sends Coyote out four times, once in each direction, to find out how far the sea is. He quickly returned from the south and the west, reporting that it was nearby. The journey east took a bit longer, but eventually he found the sea there also. Finally, he journeys northward and never finds water before growing tired.

Meanwhile, the Great Spirit helped by Montezuma, has again repopulated the world with people and animals. Montezuma is entrusted with the governance of mankind, but becoming proud and wicked, he rebels against the Great Spirit, dismisses Coyote, and commands mankind to build a house tall enough to reach Heaven. Before he can succeed at this endeavor, the Great Spirit casts it down with thunderbolts, causing a confusion in the languages of mankind.

Persisting in his wickedness, Montezuma commands all the temples be destroyed; in response, the Great Spirit punishes him by sending a locust to the east to summon the Spanish, who make war on Montezuma and destroy him. This legend was related by chief Con Quien of the Tohono O'odham and published in the Indian Affairs Report of 1865 (131).

In other versions of the legend, Montezuma's control over all the tribes he had brought together caused men to become evil and to hunt and kill, they were warned by the Great Spirit but did not heed the warning and so they were punished with winter, snow, ice and hail. As further punishment, the Great Spirit took away the people's ability to understand the animals and other tribe's language, in response to this punishment, Montezuma told people not to pray to the creator. The Great Spirit wept and was forced to destroy those that opposed him by sending in the Spanish.

Hubert Howe Bancroft, writing later in the nineteenth century (Native Races, vol. 3), speculates that the name of the historical Aztec emperors Moctezuma (more properly Motecuhzoma in Nahuatl) was the ultimate origin of the mythical hero-god's name—the name being "gradually associated in the minds of some of the New Mexican and neighboring tribes, with a vague, mythical, and departed grandeur," until "all the lesser heroes would be gradually absorbed in the greater, and their names forgotten. Their deeds would become his deeds, their fame his fame."

However, other references among the Arizona and New Mexico tribes indicate a belief in "Montezuma" as having been the name of a great king and law-giver of the remote past, who ruled over a vast empire including Mexico, and who is said to be buried inside a particular mountain in Arizona that allegedly bears his image.

Montezuma also figures prominently in the religion of the Pueblo Indians, who held that their god-king Montezuma was variously from Taos Pueblo, Acoma Pueblo, or one of the other pueblos, and was conceived from a beautiful virgin and a pinyon pine nut. Although weak as a youth, he was chosen to be their unlikely leader, and surprised everyone with his miracles, including the ability to produce rain. He taught the people their customs, and how to build the adobe pueblos. One day he kindled a fire that they were never to allow to burn out, then departed for Mexico (in some versions, on the back of an eagle), promising to return some day and save them from the Spanish.

U.S. Attorney W. W. H. Davis, who visited the Laguna Pueblo in 1855, was allowed a rare glimpse at some sort of idol or icon of their god Montezuma, whereof he gave a vivid description in his book El Gringo. According to Davis, this object was round, nine inches tall and in diameter, and made of tanned skin. The cover was painted half red and half green, and on the green side were triangular holes for eyes, round pieces of leather for the mouth and ears, and no nose. He said it was kept wrapped in cloth, and was sprinkled with a white powder.

The Swiss-American ethnographer Adolph Bandelier asserted in the 1890s that these legends had been invented by the Pueblos fifty years earlier solely to impress American explorers, and were not really part of their religion; he cited a document purporting to be a secret plot to 'teach' the natives that they were the descendants of Emperor Montezuma for political purposes, during the Mexican-American War. However, other documents have since come to light showing that the Spanish too were quite aware of Montezuma's renown in the Pueblo region of Arizona long before then—the earliest such recorded reference dating to 1694, when the natives told Jesuit Father Eusebio Francisco Kino that Montezuma had built what is still today known as Montezuma's Castle (Wilson 1999, 16). 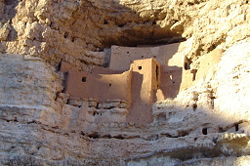 Montezuma's Castle is a five-story stone and mortar dwelling containing 20 rooms that once housed about 50 people. A natural overhang shades the rooms and shelters them from rain. Another part of the cliff wall bears the marks of an even larger dwelling, which has not survived. At first believed to be built by the Aztec emperor, it was later discovered that it was abandoned almost a century before his birth; they are now known to belong to the Sinagua Indian peoples who farmed the surrounding land between the twelfth and fourteenth centuries before abandoning the area.

East of the Rio Grande River there are ruins of a Pueblo believed to be Montezuma's church in which he lit a fire and told the people that it was never to be extinguished or certain death would fall to them. Next to the fire Montezuma planted a tree in an inverted position and said that when the tree fell "pale faced," people would come and release the people from their oppressors.

The Pueblo Indians say that Montezuma's prophecy has been literally fulfilled. Soon after Montezuma returned to the Great Spirit, the enemy, in the form of Spanish conquistadors, came, conquered, and enslaved them. Although they could not shake off the oppressors, still they kept the holy fire burning, and tried to dwell in peace with all men. The Spaniards lived there amongst them until about the middle of the nineteenth century, when the wild Indians of the mountains attacked and desolated Pecos, driving away and murdering its inhabitants. Nevertheless, through their entire capture and enslavement, a faithful few among the Indians managed to keep Montezuma's fire burning as promised, until at last the deliverers with "pale faces poured in from the east," and the tree fell as Montezuma said it would when the American army entered Santa Fe.

Finally, Llewellyn Harris, a Welsh-American Mormon missionary who visited the Zuni in 1878, claimed that they told him they were descended from Montezuma, who was himself descended from white men called "Cambaraga" who came from over the sea three hundred years before the Spanish, and that they still had many Welsh words in their language (such as Madoc). However, these sensational claims have not yet been independently verified.