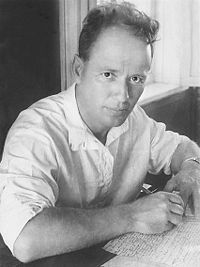 Mikhail Aleksandrovich Sholokhov (Russian: Михаи́л Алекса́ндрович Шо́лохов IPA: [mʲɪxʌˈil əlʲɪˈksandrəvʲɪtɕ ˈʂoləxəf]) (May 24 [O.S. May 11] 1905) - February 21, 1984) was a Soviet/Russian novelist and winner of the 1965 Nobel Prize in Literature. He was the most widely read author in the Soviet Union during the period of Socialist realism. His portrayal of the struggles of the Don Cossacks with the new Bolshevik government was praised for its gripping realism, in the tradition of the great Russian realist authors of the ninteenth century. The novel demonstrates how the Cossacks, although always a violent culture, were nonetheless corrupted by their struggle with the Bolsheviks. This was not a message that the government embraced but Stalin liked the book. Sholokhov would partially "atone" in his sequel, The Virgin Soil, which depicted the period of collectivization and the war on the kulaks, or "rich" peasants.

Mikhail Sholokhov and his wife, 1924

Sholokhov was born in the Kamenskaya region of Russia, in the "land of the Cossacks" - the Kruzhlinin hamlet, part of stanitsa Veshenskaya, the former Region of the Don Cossack Army. His father was a member of the lower middle class, at times a farmer, cattle trader, and miller. Sholokhov's mother came from Ukrainian peasant stock and was the widow of a Cossack. She was illiterate but learned to read and write in order to correspond with her son. Sholokhov attended schools in Kargin, Moscow, Boguchar, and Veshenskaya until 1918, when he joined the side of the revolutionaries in the Russian civil war. He was only 13 years old.

Sholokhov began writing at 17. The Birthmark, Sholokhov's first story, appeared when he was 19. In 1922 Sholokhov moved to Moscow to become a journalist, but he had to support himself through manual labor. He was a stevedore, stonemason, and accountant from 1922 to 1924, but he also intermittently participated in writers' "seminars." His first work to appear in print was the satirical article "A Test" (1922).

In 1924 Sholokhov returned to Veshenskaya and devoted himself entirely to writing. In the same year he married Maria Petrovna Gromoslavskaia; they had two daughters and two sons.

His first book Tales from the Don, a volume of stories about the Cossacks of his native region during World War I and the Russian Civil War, was published in 1926. In the same year Sholokhov began writing And Quiet Flows the Don which took him fourteen years to complete (1926-1940), earning him the Stalin Prize. It became the most-read work of Soviet fiction and was heralded as a powerful example of socialist realism, and won him the 1965 Nobel Prize in Literature. Virgin Soil Upturned, which earned the Lenin Prize, took 28 years to complete. It was composed of two parts: Seeds of Tomorrow (1932) and Harvest on the Don (1960), and reflects life during collectivization in the Don area. The short story "The Fate of a Man" (1957) was made into a popular Russian film and his unfinished novel They Fought for Their Country is about the Great Patriotic War.

His collected works was published in eight volumes between 1956 and 1960.

Sholokhov has been accused, by Alexander Solzhenitsyn among others, of plagiarizing And Quiet Flows the Don. The evidence was largely circumstantial: Sholokhov's age at the time of its composition and, in particular, the gulf in quality between his masterpiece and his other works. To complicate matters, Sholokhov could produce no rough drafts of Don, claiming that they had been destroyed by the Germans during World War II. A 1984 monograph by Geir Kjetsaa and others demonstrated through computer study that Sholokhov was indeed the likely author of Don. And in 1987, several thousand pages of notes and drafts of the work were discovered and authenticated. 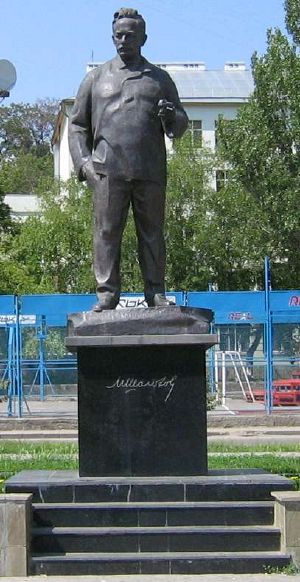 Monument to Mikhail Sholokhov in Rostov-on-Don

Sholokhov joined the CPSU in 1932, and in 1937 he was elected to the Supreme Soviet. In 1959 he accompanied Soviet Premier Nikita Khrushchev on a trip to Europe and the United States. He became a member of the CPSU Central Committee in 1961, Academician of the USSR Academy of Sciences in 1939, and was a member of the USSR Supreme Soviet. He was twice awarded Hero of Socialist Labor, and later became vice president of the Association of Soviet Writers.

And Quiet Flows the Don

And Quiet Flows the Don (1934) is the first part of Shokholov's great Don epic (Tikhii Don / Тихий дон). It originally appeared in serialized form between 1928 and 1940. The English translation of the first half of this monumental work appeared under this title in 1934.

The novel deals with the life of the Cossack peoples living in the Don river valley around the early twentieth century, prior to World War I. The plot revolves around the Melekhov family of Tatarsk, who are descendants of a prominent soldier who, to the horror of many, took a Turkish female captive as a wife and started a family with her. His descendants, who are the protagonists of the story, are therefore often nicknamed "Turks." Nevertheless, they command a high amount of respect among people in Tatarsk. The second eldest son of the house, Gregori Melekhov, is a promising young soldier who falls in love with Aksinia, the wife of a family friend. Their romance and elopement raises a feud between her husband and his family. The outcome of this romance is the focus of the plot as well as the impending World War which draws up the best young Cossack men for what will be one of Russia's bloodiest wars.

An epic novel, it is often compared to War and Peace by Leo Tolstoy. Like the Tolstoy novel, And Quiet Flows the Don covers a panorama of Russian life during a time of crisis and examines it through both political, military, romantic, and civilian lenses. The novel won the Stalin Prize in 1941 and its author won the Nobel Prize in 1965. The novel has been adapted for television screen three times, in 1931 by Ivan Pravov and Olga Preobrazhenskaya, in 1957 by Sergei Gerasimov (starring Elina Bystritskaya) and in 1992-1993 by Sergei Bondarchuk (starring Rupert Everett).