Karl Ritter von Frisch (Note: Ritter is a title, translated approximately as "Knight," not a first or middle name) (November 20, 1886 – June 12, 1982) was an Austrian ethologist and zoologist. His research revolutionized our understanding of the sensory perception of fish and insects. His most distinguished discovery was that honeybees communicate the location of a food source to their hive mates by performing a complex dance, known as the "waggle dance." Frisch received the Nobel Prize in 1973, along with Nikolaas Tinbergen and Konrad Lorenz, for his pioneering work in the field of animal social behavior. Their work recognized that animal behavior, although simpler than that of human beings, nonetheless contains many aspects that are similar and that such research contributes to the understanding of human nature.

Karl von Frisch was born in Vienna, Austria, the son of a university professor Anton von Frisch, and Marie Exner. As a child he showed a great interest in animals, which was encouraged by his family. His uncle, Sigmund Exner, a famous physiologist and an authority on insect vision, influenced and helped young Frisch in his early studies of the vision of honeybees.

In 1905, Frisch enrolled as a student of medicine at the University of Vienna, where his uncle taught human physiology. His uncle noticed Frisch’s love for animals, and encouraged Frisch to take some classes on animal physiology. Frisch participated in several research projects on the position of pigments in the compound eyes of certain beetles, butterflies, and crustaceans. It was in 1908 that Frisch decided to drop the medicine and totally dedicate his study to zoology. He transferred to the Zoological Institute at the University of Munich where he studied under Richard von Hertwig. He received his doctorate in zoology in 1910.

In the following years, Frisch stayed at the University of Munich and continued his research on light perception and color recognition in different animal species. He challenged the traditional assumptions of the scientific community about the color vision of fish and invertebrates. This brought him into disagreement with some distinguished names in academia, most notably Karl von Hess, the director of the Munich Eye Clinic.

With the outbreak of the World War I Frisch was called to the service, but was not accepted due to his poor eyesight. He however volunteered at a Red Cross hospital where he established a bacteriologic laboratory, specializing in rapid diagnosis of diseases such as cholera, dysentery, and typhoid. At the hospital he met a nurse, Margarethe Mohr, whom he married in 1917. They had one son and three daughters.

In 1919, Frisch returned to the University of Munich where he became assistant professor. While there he started his work on the behavior of honeybees, noticing for the first time the peculiar “dance” of scout bees. He was so fascinated with the discovery that he decided to dedicate most of his time to study of this strange behavior. It took him 20 years to fully comprehend the complexity of the bees’ dance.

Frisch received numerous prizes and honors, including the Balzan Foundation Award in 1963 and memberships in the United States National Academy of Sciences and the Royal Society of London. In 1973 scientific community awarded him the highest award in science—the Nobel Prize for medicine and physiology, together with two other animal behaviorists, Konrad Lorenz and Nikolaas Tinbergen.

Karl von Frisch dedicated his doctoral thesis to the study of light perception and color changes in minnows. He discovered that minnows had an area on the forehead that is filled with sensory nerve cells, which he called a "third, very primitive eye." He showed that blind minnows could react to light by changing color in the same way as minnows with sight. Frisch’s discovery contradicted the common belief of his time that fish and all invertebrates were color blind, and with this he stirred serious discussion among scientists. The leader of a group that opposed Frisch’s work was Karl von Hess, the director of the Munich Eye Clinic. His opponents objected Frisch’s theoretical orientation, which was rooted in Darwin’s evolutionary theory, and which held that the survival of most of the animal species depended on the development of their senses. He argued that animals adapt their behavior to better suit environmental conditions, a belief that was under debate in the scientific community at the time.

Frisch also studied auditory perception of fish. Again contrary to the established belief of the times that fish could not hear, Frisch argued that they could, and designed a series of experiments to prove his point. He conditioned fish by pairing the sound of a whistle with the delivery of their food. He discovered that fish responded to the sound even when the food was absent. He showed that fish could hear, and later proved that the auditory acuity and sound-distinguishing ability of fish is more developed and superior to that of humans.

Frisch however became famous for his study of honeybees. He first decided to prove that bees could distinguish colors, and started from his assumption of the adaptive function of the behavior. He argued that the bright colors of flowers developed to attract bees for the purpose of pollination. The logical conclusion would be that the bees could perceive those colors. To prove his point Frisch conditioned bees to respond to the blue-colored objects, which contained sweet water. After removing the sweet water, bees would still come to the blue-colored objects, proving that they could distinguish colors.

Frisch's most distinguished discovery was that of the “wiggle dance” of the scout bee. Through his previous experiments he had noticed that scout bees somehow “communicate” the exact location of food to the other bees. For the purpose of study Frisch constructed a glass honeycomb, so that the bees could be observed from all sides. He noticed that scout bees, after returning from a successful food search, conveyed their finding to the other bees by performing two types of rhythmic movements—circling and wagging. The round circling movement was used to indicate relatively close sources of food, while the more complex form indicates food sources at greater distances. The latter became known as the bees’ “waggle dance.”

In 1949, Frisch proved that bees can perceive polarized light, which helps them to navigate through space. They use the sun as their main compass, and in the absence of the sun they memorize patterns of polarization of the sky at different times of the day. They could also memorize the location of certain landmarks in nature.

In his A Biologist Remembers (1967) Frisch wrote about his life’s work:

The layman may wonder why a biologist is content to devote 50 years of his life to the study of bees and minnows without ever branching out into research on, say, elephants, or at any rate the lice of elephants or the fleas of moles. The answer to any such question must be that every single species of the animal kingdom challenges us with all, or nearly all, the mysteries of life.

The "waggle dance" is the name given to a particular figure-eight dance of the honeybee. By performing this dance, successful foragers can communicate with their hive mates information about the direction and distance to patches of flowers yielding nectar or pollen, or both, and to water sources. Thus the waggle dance is a mechanism whereby successful foragers can recruit other bees in their colony to good locations for collecting various resources. 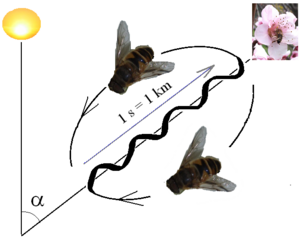 The angle from the sun indicates direction. The duration of the waggle part of the dance signifies the distance.

The dance consists of a number (as many as 100) of circuits, each of which consists of two phases: the waggle phase and the return phase. When a scout bee returns from a rich, new food source it enters the hive and immediately crawls onto one of the vertical combs. Here, amidst a massed throng of other bees, it begins to dance. This involves running through a small figure-eight pattern: a waggle run (waggle phase) followed by a turn to the right to circle back to the starting point (return phase), another waggle run, followed by a turn and circle to the left, and so on in a regular alternation between right and left turns after waggle runs. The waggle phase of the dance is the most striking and informative part of the signaling bee's performance.

The direction and duration of waggle runs are closely correlated with the direction and distance of the patch of flowers being advertised by the dancing bee. Flowers located directly in line with the sun are represented by waggle runs in an upward direction on the vertical combs, and any angle to the right or left of the sun is coded by a corresponding angle to the right or left of the upward direction. The distance between hive and food source is encoded in the duration of the waggle runs. The farther the target, the longer the waggle phase, with a rate of increase of about 75 milliseconds per 100 meters.

Amazingly, waggle dancing bees that have been in the hive for an extended time period adjust the angles of their dances to accommodate the changing direction of the sun. Therefore bees that follow the waggle run of the dance are still correctly led to the food source even though its angle relative to the sun has changed.

Frisch studied the senses of bees, showing their sensitivity to ultraviolet and polarized light, and identified their mechanisms of communication. In the center of his work was the study of the sensory perceptions of the honeybee and the way they communicate the location and direction of food sources through a special "dance." He was the first to translate the meaning of the “waggle dance.” His theory was disputed by other scientists and greeted with skepticism at the time. Later, however, it was found to be an accurate analysis.

Frisch received, together with Konrad Lorenz and Nikolaas Tinbergen, the Nobel Prize for his lifework in 1973. It was the first time that the scientific community so widely acknowledged the significance of the study of animal behavior in relation to human social behavior.

Retrieved from https://www.newworldencyclopedia.org/p/index.php?title=Karl_von_Frisch&oldid=1080985
Categories:
Hidden category:
This page was last edited on 5 October 2022, at 07:22.
Content is available under Creative Commons Attribution/Share-Alike License; additional terms may apply. See Terms of Use for details.