Ha Long Bay (Vietnamese: Vịnh Hạ Long) situates in Quảng Ninh province in northeastern Vietnam, from E106°56' to E107°37' and from N20°43' to N21°09'. The bay stretches from Yên Hưng district, past Hạ Long city, Cẩm Phả town to Vân Đồn district, bordered on the south and southeast by the Gulf of Tonkin, on the north by China and on the west and southwest by Cát Bà island. The bay has a 120 kilometer long coastline and covers approximately 1,553 square kilometers with 1969 islets. UNESCO designated Ha Long Bay a World Heritage site in 1994 and extended in 2000.[1] The area designated by UNESCO as the World Natural Heritage Site includes 434 km² with 775 islets, the zone defined by Đầu Gỗ island on the west, Ba Hầm lake on the south and Cống Tây island on the east. The protected area extends from the Cái Dăm petrol store to Quang Hanh commune, Cẩm Phả town and the surrounding giants zone. The bay features thousands of limestone karsts and isles in various sizes and shapes.

Vietnam's origin myth points to Halong Bay as the place where Vietnam became. The myth represents dragons as the founders of the peninsula empire, which intervened to save the region, on the behest of the gods, from invading Chinese forces. The myth reveals several things. First, the relationship of Vietnam with China. As with other smaller kingdoms in Southeast Asia, great distances from the power centers of China on the coast in the north, Vietnam could successfully resist China's armies. Second, the origin myth of the dragon reveals the Vietnamese people's confidence that the gods have granted Vietnam a special protection and blessing. Third, the natural beauty and uniqueness of Halong Bay is revealed through the dragon origin myth. The myth portrays the creation of 1600 islands, shaped in unique forms out of limestone, as the result of the dragons spitting jewels and jade into the sea. Halong Bay has been nominated as one of the eight wonders of the world.

In 1962, Vietnam Ministry of Culture, Sport and Tourism declared Halong Bay a National Renowned Landscape Vestige site.[2] UNESCO listed the bay as a World's Natural Heritage at the 18th meeting of the Committee of the World Heritages of UNESCO (in Phuket, Thailand on December 17, 1994), citing its exceptional aesthetic nature, as an outstanding natural site. On December 2, 2000 at the 24th meeting of Committee of the World Heritages in Cairns, Australia, UNESCO designated Halong bay a World Heritage Site for its outstanding geological and geomorphological value according to the criteria of that Convention.[3] The New Open World Foundation nominated Halong bay as one of the World's Eight Natural Wonders, the decision scheduled for August 8, 2008.[4]

Local legend relates that when the Vietnamese fought invading Chinese armies, the gods sent a family of dragons to help defend the land.[5] That family of dragons began spitting out jewels and jade. Those jewels turned into the islands and islets dotting the bay, linking together to form a great wall against the invaders. The people kept their land safe and formed what later became the country of Vietnam. After that, dragons decided to live in Ha Long Bay. The place where Mother Dragon flew down became Hạ Long, the place where the dragon children attended upon their mother received the name Bái Tử Long island (Bái: attend upon; Tử: children; Long: dragon), and the place where the dragon children wriggled their tails violently became known as Bạch Long Vỹ island (Bạch: white- color of the foam made when Children Dragon wriggle; Long: dragon, Vỹ: tail).

Mê Cung and Thiên Long archaeological sites in Hạ Long and Bái Tử Long provide a look into Halong Bay's prehistoric period. Mounds of the remains of mountain shellfishes (Cyclophorus) and spring shellfishes (Melania), some fresh water mollusk and some rudimentary labor tools have been found in the site. The Soi Nhụ tribe inhabited the region before 5000 B.C.E. They lived primarily by catching shellfish and fish, collecting fruits and digging for bulbs and roots. Their way of life compares to other tribes in Vietnam during that period, including the Hoà Bình and Bắc Sơn. The Cái Bèo tribe (5000- 3000 B.C.E.), located in Hạ Long and Cát Bà island, developed fishing techniques that including using boats.

Halong Bay has been the setting for battles against invading navies. In the labyrinth of channels in Bach Dang river near the islands, the Vietnamese army stopped the Chinese from landing on three occasions. In 1288, General Tran Hung Dao stopped Mongol ships from sailing up the Bach Dang River by placing steel-tipped wooden stakes at high tide, sinking the Mongol fleet.[6] During the Vietnam War, the United States navy heavily mined many of the channels between the islands, some still pose a threat to shipping.[7]

System of isles and caves 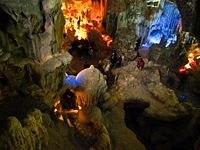 Some 1600 limestone islands and inlets, covered by jungle vegetation, populate Halong bay. The effect of some many tightly packed, richly vegetated, limestone islands is remarkable. The islands, for the most part, are uninhabitable, the limestone terrain making living too difficult. Enormous caves exist on some the the islands, giving the sense of being hollow.[8] Hang Đầu Gỗ (Wooden stakes Cave) stands as the largest grotto in the Halong area.

In the late nineteenth century, French named the cave Grotte des Merveilles. Abundant stalactites and stalagmites furnish the three gigantic chambers. Tuan Chau and Cat Ba, the two largest islands in the Bay, have year-round residents, along with hotels and beaches. Many of the smaller islands, suitable only for short stays, have idyllic beaches.[9]

Floating villages, adapting to the inhospitable limestone islands, have taken root on some islands. They fish the bay for 200 species of fish and 450 different kinds of mollusks.[10] Islands often receive their names from the images their forms suggest, for example: Voi Islet (elephant), Ga Choi Islet (fighting cock), and Mai Nha Islet (roof). 1000 islands have received names. Although the islands, for the most part, have proven impossible for humans to live year round, birds and animals inhabit them, including bantams, antelopes, monkeys, and iguanas.[9] 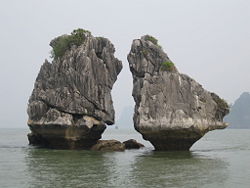 Retrieved from https://www.newworldencyclopedia.org/p/index.php?title=Ha_Long_Bay&oldid=1097478
Categories:
Hidden category:
This page was last edited on 24 January 2023, at 13:21.
Content is available under Creative Commons Attribution/Share-Alike License; additional terms may apply. See Terms of Use for details.