Phong Nha-Ke Bang (Vietnamese: Vườn quốc gia Phong Nha-Kẻ Bàng) is one of the world's largest karst regions with 300 caves and grottoes. They extend about 70 kilometers (43 mi) with the world's longest underground river, as well as the largest caverns and passageways ever discovered.[1] The government of Vietnam declared Phong Nha-Ke Bang a national park in 2001 to protect the cave and grotto system as well as the ecosystem of the limestone forest there. Some of the evergreen trees are dated at 500 to 600 years old. Among the hundreds of types of flora, thirty six endangered species thrive. Fauna abounds throughout the park as well, including twenty three endangered species and sixty six receiving special protection from the Vietnamese government.

The region is also important as an archeological site. Neolithic artifacts have been found from Vietnam's prehistoric period as well as excellent samples of hieroglyphic script of the Cham tribe. It is thought by some archeologists that the Bi Ky grotto may have housed a Champa mosque during the ninth through eleventh centuries. Champa inscriptions from early Vietnamese history have been carved on steles and altars. Champa-style ceramics as well have been discovered there. UNESCO declared Phong Nha-Ke Bang a World Heritage Site in 2003.[2]

Phong Nha-Ke Bang is located in the Bố Trạch and Minh Hóa districts of central Quang Binh Province, in north-central Vietnam, about 500 kilometers south of the nation's capital, Hanoi. The park borders the Hin Namno Nature Reserve in the province of Khammouan, Laos by the west, forty two kilometers east of South China Sea. Phong Nha-Ke Bang National Park is located in a limestone zone of 200,000 hectare in Vietnamese territory and borders another limestone zone of 200,000 hectares of Hin Namno in Laotian territory. The core zone of the national park covers 85,754 hectares and a buffer zone of 195,400 ha.[1] 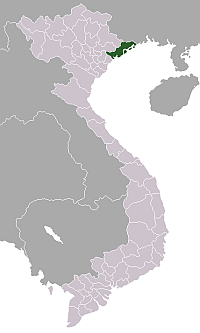 Champa inscriptions carved on steles and altars in the cave give evidence that people had inhabited the cave long before Vietnam annexed the area in the Nam Tien southward expansion. In 1550, Dương Văn An became the first Vietnamese man to write about Phong Nha cave. Phong Nha cave has been depicted in nine urns in the Citadel of the Nguyen Dynasty in Huế.[1] In 1824, king Minh Mang conferred the title "Diệu ứng chi thần" (Han Tu: 妙應之神) on Phong Nha cave. Nguyen kings bestowed the title "Thần Hiển Linh" (Han Tu: 神顯靈).

In the late nineteenth century, Léopold Michel Cadière, a French Catholic priest, conducted an expedition to explore Phong Nha cave, in which he discovered Champa scripts. He proclaimed Phong Nha cave "the number one cave of Indochina."[3] In July 1924, an English expeditionist, Barton, declared Phong Nha cave second to neither of famous caves of Padirac (France), or Cuevas del Drach (Spain) in respect to beauty.[4]

In 1935, a local inhabitant accidentally discovered a beautiful cave one kilometer from Phong Nha cave mouth, at a depth of 200 meters. The cave received the name Tien Son cave (lit.: Fairy-tale cave), or Dry cave because of the lack of an underground river. In 1937, the Bureau of Tourism of French Resident Superior (in Huế) issued a brochure to promote tourism in Quang Binh, introducing Phong Nha Cave in the brochure. Before 1990, Vietnamese and foreign groups conducted several explorations. From 1990 the number of discovery and research expeditions increased dramatically, leading to a drafting of documents recommending the site as a UNESCO for World Natural Heritage designation.

The Vietnamese government officially declared the Phong Nha Nature Reserve on August 9, 1986, designating an area of 5,000 ha, later extending that to 41,132 ha by 1991. On December 12, 2001, the Vietnamese Prime Minister announced upgrading the nature reserve to a national park to protect the biodiversity of the park, especially rare species of fauna and flora native to the region. The park covers a total area of 857.54 square kilometers divided into three zones, a "strictly protected zone" (648.94 km²), an "ecological recovery zone" (174.49 km²), and an "administrative service zone" (34.11 km²). 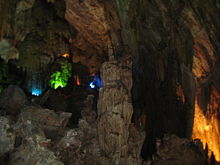 The Phong Nha–Ke Bang karst has evolved since the Paleozoic (some 400 million years ago), the oldest major karst area in Asia. Massive tectonic changes, comprising a series of rock types that inter-bed in complex ways, have occurred. As many as seven different major levels of karst development have occurred as a result of tectonic uplift and changing sea levels, making the karst landscape of the park extremely complex with high a geodiversity and many geomorphic features. Like much of Vietnam, the limestones of Phong Nha have inter-bedded with a number of other rocks. Investigations point to sulfurous solution and hydrothermal action playing an important role in shaping the broad-scale landscape and the caves. 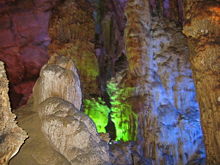 Spectacular stalagmite in a cave in the Phong Nha Ke Bang National Park. 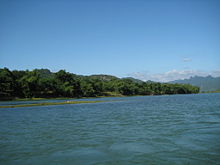 Besides the grotto and cave systems, Phong Nha has the longest underground river in the world. The Son and Chay are the main rivers in the national park. Most of caves have been shaped by Son and Chay Rivers. The Son River flows into the mouth of the Phong Nha cave and continues underground. Called the Nam Aki River, it emerges 20 kilometers to the south near Pu-Pha-Dam Mountain. Ten spectacular streams, springs and waterfalls exist in Phong Nha-Ke Bang area, namely: Gió waterfall, Madame Loan waterfall, Mọc stream erupting from a limestone mount range, and Trạ Ang stream.[5] 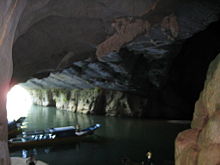 Phong Nha-Ke Bang covers 300 different grottoes and caves. Phong Nha cave has been evaluated as the top cave in the world due to its four records: the longest underground river, the highest and longest cave, broadest and most beautiful fine sand beaches inside the caves, the most spectacular stalagmites and stalactites.[6] According to the assessment of UNESCO, "The karst formation of Phong Nha-Ke Bang National Park has evolved since the Paleozoic (some 400 million years ago) and so is the oldest major karst area in Asia"[7] and "Phong Nha displays an impressive amount of evidence of earth’s history. It is a site of very great importance for increasing our understanding of the geologic, geomorphic and geo-chronological history of the region."[7]

The Phong Nha cave inspired the name for the Park. Famous rock formations have been given names such as the "Lion," the "Fairy Caves," the "Royal Court," and the "Buddha." The cave measures 7729 meters long, contains fourteen grottoes, with a 13,969 meter long underground river. Scientists have surveyed 44.5 kilometers of grottoes in the cave so far, but visitors may explore only a distance of 1500 meters.[1] The main Phong Nha cave includes fourteen chambers, connected by an underwater river that runs for 1.5 kilometers. Secondary corridors branch off in several directions. The Outer Cave and some of the Inner Caves have roofs that tower between twenty five and forty meters above the water level. Notable caves and grottoes include Phong Nha Cave system, Vom Cave systems, the Tien Son Cave, and Thien Duong Cave.

Biodiversity in the park 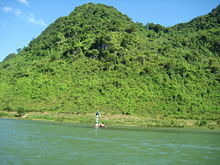 Hopea sp., Sumbaviopsis albicans, Garcinia fragraeoides, Burretionendron hsienmu, Chukrasia tabularis, Photinia aroboreum, and Dysospyros saletti constitute the most common tree species in the park. Seedlings can only grow in holes and cracks in the limestone where soil has accumulated, so in general regeneration after disturbance proceeds slowly. evergreen tree species with scattered deciduous trees such as Dipterocarpus kerri, Anogeissus acuminate, Pometia pinnata, and Lagerstroemia calyculata dominate the forest.

The dominant plant families include the Lauraceae, Fagacaeae, Theaceae and Rosaceae, with some scattered gymnosperms such as Podocarpus imbricatus, Podocarpus neriifolius, and Nageia fleuryi.[8] A 5000-ha forest of Calocedrus macrolepis on limestone (Calocedrus rupestris) mounts with about 2,500 trees, 600 per hectare exists, constituting the largest forest with this tree in Vietnam. Most of the trees have been dated at 500 to 600 years old. 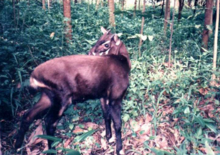 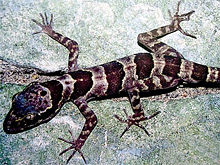 The forest serves as home to ninety eight families, 256 genera and 381 species of vertebrates. Sixty-six animal species have been listed in Vietnam's Red Data Book and twenty three other species in the World Red Book of Endangered Species. In 2005, a group of Vietnamese biologists, together with biologists working for the park, Cologne Zoo in Germany and the Saint Petersburg Wild Zoology Institute in Russia discovered a new species of gecko (Lygosoma boehmeiwas).[9]

The Gaur, and one specie of eel, have been discovered in the park.[1] Scientists discovered ten species never seen before in Vietnam.[10] The Park hosts significant populations of primates, with ten species and sub-species. Those include the globally vulnerable Pig-tailed Macaque, Assamese Macaque, Stump-tailed Macaque and White-cheeked Crested Gibbon (Nomascus leucogenys and Nomascus leucogenys siki). The Park hosts the largest population of Francois' Langur in Vietnam, including two different forms of the specie. A population of Hatinh Langur and Black Langur, the largest population of those species in the world and the only population represented in a protected area, inhabit the park.

Neolithic axe heads and similar artifacts found in some of the caves give evidence of the first human habitation in the area. An ancient hieroglyphic script of the Cham ethnic minority had been found in Phong Nha-Ke Bang .[1] In 1995, the Archeological Institute of Vietnam noted Phong Nha cave as an extremely important archeological site, suggesting that the Bi Ky grotto may have sheltered a Champa mosque from the ninth to eleventh century. Inside Phong Nha cave, many Champa style ceramics with lotus-shaped ruby-colored, and slight pink mouth earthenware vases have been found.[12]

In early twentieth century, cave explorers and researchers from France and the UK discovered several ancient Champa and Vietnamese relics, such as altars, steles, hieroglyphic script, sculptures, stone statues, Buddha statues, and Chinese artifacts. King Ham Nghi built a base for the Vietnamese resistance against the French colonialism during the late nineteenth century.[1] During the Vietnam War, the caves served as an impregnable major base of the North Vietnamese Army.[12]

The Park Management Board includes 115 people serving as zoologists, botanists, silviculturists, and socio-economists. The management staff lacks the authority to fine violators and lacks equipment like helicopters and sufficient funds, hamstringing their attempts to efficiently deal with natural and human threats to the park.[1] The government has created an eighteen hectare semi-wild zone, surrounded by electrical wire fence, for the primate species. The preserve had been sponsored by Zoologische Gesellschaft Frankfurt (Germany) to provide a sanctuary for ten species of primates, including Trachypithecus francoisi hatinhensis, red-shanked douc langur or Pygathrix nemaeus nemaeus).[13]

Two villages, Arem and Ma Coong, exist in the core zone of the Phong Nha-Ke Bang National Park. The buffer zone has a population of 52,001, mainly Kinh people and other minority groups of Chut and Van Kieu. Many of the villagers living in the buffer zone exploit the forest for a livelihood. The increase of visitors to the park has increased water pollution & rubbish pollution. Hunting by locals has been a significant threat to the wildlife, especially the wild pig, binturong, rare eels like Anguilla marmorota and Anguilla bicolo, and primates.[14]

Locals cutting of rare wood such as Go Mun wood (Diospyros spp.) and Go Hue wood (Dalbergia rimosa) has harmed the forests. During the construction of roads, blasts and construction work have kept several primates away from their regular habitat.[15] Limestone in Phong Nha-Ke Bang area has been exploited for commercial purposes by local inhabitants. The provincial government approved a 3600MW coal-fueled thermoelectric plant in Vĩnh Sơn village, Quảng Đông commune, Quang Trach district, forty kilometers northeast of the national park. The project has many environmentalists deeply concerned.[16]