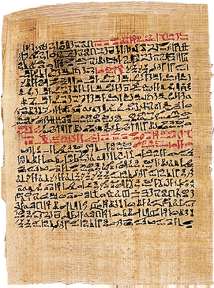 Ebers Papyrus treatment for cancer: recounting a "tumor against the god Xenus," it recommends "do thou nothing there against".

Ebers Papyrus is a preserved medical document from ancient Egypt, traced to about 1550 B.C.E. Longer and more complete than the Edwin Smith Papyrus, and about as old (the Edwin Smith Papyrus is dated to about 1600 B.C.E.), it is a collection of diverse medical texts that offers the most complete record of Egyptian medicine. It has been called the most important medical papyrus yet recovered (WNI 2008).

Ailments addressed range from crocodile bites to toenail pains. Included are sections on intestinal disease, diabetes mellitus, arthritis, gynecology, burns, fractures, contraception, hookworm, and dentistry. The circulatory system is described surprisingly accurately, including the role of the heart and the existence of blood vessels, and there also is a short section on psychiatry, dealing with a condition that would be similar to depression. It even deals with how to rid a house of pests. The Ebers Papyrus offers numerous remedies and magical formulas for the various ailments (WNI 2008).

The Ebers Papyrus shows an early quest for a systematic approach to health and restoring of the natural harmony to the human body. It recognized an interplay of physical and spiritual forces in human health, although the understanding of illness and the science remained at a rudimentary level.

The Ebers Papyrus was purchased at Luxor (Thebes) in the 1870s by Georg Ebers and is now in the library of the University of Leipzig, Germany.

The Ebers Papyrus measures about 20.23 meters in length and 30 centimeters in height (WNI 2008) and comprises 110 pages (Demand 2000). It is much longer than other extant medical papyri from ancient Egypt. The Edwin Smith Papyrus comprises 17 pages (377 lines) on the recto and five pages (92 lines) on the verso (Demand 2000). (Recto refers to the right-hand page and verso to the left-hand page.)

The Ebers Papyrus is dated to about 1552 B.C.E. (WHI 2008), 1534 B.C.E. (Demand 2000), or 1536 (Carpenter et al. 1998), based on the passage on the verso referring to the ninth year of the reign of Amenhotep I (Demand 2000). However, there is a portion of the papyrus (paragraph 856a) that suggests a considerable earlier origin—a reference to the Lower Egypt Den that would place an origin nearer to the First Dynasty (about 3000 B.C.E.) (Demand 2000). For this reason, some believe it to be a copy of ancient books of the reputed father of medicine, alchemy, and pharmacy, Thoth (3000 B.C.E.). At any rate, the Ebers Papyrus is one of the two oldest preserved general medical documents anywhere. Another important medical papyrus is the Brugsch Papyrus (around 1300 B.C.E.). The Kahun Gynecological Papyrus—a more specific text dealing mainly with reproductive organs, such as birth, conception, and testing for pregnancy—has been dated to 1825 B.C.E. (Demand 2000).

The Ebers Papyrus is really a somewhat haphazard collection of diverse medical texts, which is organized by paragraphs arranged into blocks addressing particular medical ailments (Demand 2000).

The Ebers Papyrus preserves the most voluminous record of ancient Egyptian medicine known.

The scroll contains some 700 magical formulas and remedies to cure afflictions (WNI 2008). It contains many incantations meant to turn away disease-causing demons and there is also evidence of a long tradition of empirical practice and observation.

The papyrus contains a "treatise on the heart." It notes that the heart is the center of the blood supply, with vessels attached for every member of the body. The Egyptians seem to have known little about the kidneys and made the heart the meeting point of a number of vessels, which carried all the fluids of the body—blood, tears, urine, and sperm.

Mental disorders are detailed in a chapter of the papyrus called the Book of Hearts. Disorders such as depression and dementia are covered. The descriptions of these disorders suggest that Egyptians conceived of mental and physical diseases in much the same way. 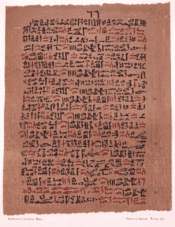 Ebers Papyrus treatment for asthma: a mixture of herbs heated on a brick so that the sufferer could inhale their fumes.

Examples of remedies in the Ebers Papyrus include:

Asthma
A mixture of herbs heated on a brick so that the sufferer could inhale their fumes.
Belly
"For the evacuation of the belly: Cow's milk 1; grains 1; honey 1; mash, sift, cook; take in four portions."
Bowels
"To remedy the bowels: Melilot, 1; dates, 1; cook in oil; anoint sick part."
Cancer
Recounting a "tumor against the god Xenus, "it recommends "do thou nothing there against."
Clothing
Clothing may be protected from mice and rats by applying cat's fat.
Death
Half an onion and the froth of beer was considered "a delightful remedy against death."

Modern history of the papyrus

Like the Edwin Smith Papyrus (or Edwin Smith Surgical Papyrus), the Ebers Papyrus was purchased by Edwin Smith in 1862. Edwin Smith was an American living in Cairo, Egypt, and he has been described as a dealer of antiquities, an adventurer, and a money lender (Demand 2000). It was purchased in Luxor, a city in Upper (southern) Egypt.

Whereas the source of the Edwin Smith Papyrus is known, Mustafa Agha, it is unclear from whom Edwin Smith purchased the Ebers Papyrus. It has been claimed to have been discovered between the legs of a mummy in the Assassif district of the Theban necropolis (Demand 2000).

The collection of Edwin Smith maintained the papyrus until at least 1869, as evidence by its appearance in an advertisement in the catalog of an antiquities dealer, with the ad referencing "a large medical papyrus in the possession of Edwin Smith, an American farmer of Luxor" (Breasted 1930; Demand 2000).

In 1872, the papyrus was purchased by the German Egyptologist and novelist Georg Ebers (born in Berlin, 1837), after whom it is named. He was shown the papyrus wrapped in old mummy clothes and it appeared to be in a perfect state of preservation. In 1875, Ebers published a two-volume, color photographic facsimile of the entire text, with a hieroglyphic-Latin dictionary by Ludwig Stern, as well as an introduction (Carpenter et al. 1998). However, it was not translated until 1890, by H. Joachim in German. English translations were done in the twentieth century. Ebers retired from his chair of Egyptology at Leipzig on a pension and the papyrus remains in the University of Leipzig library.