Doha (Arabic: الدوحة, transliteration: Ad-Dawḥah or Ad-Dōḥah) is the capital, largest city, and the economic center of Qatar. Its metropolitan area is home to more than 80 percent of Qatar’s population, and is characterized by modern, award-winning architecture that often fuses the modern with the traditional. Many buildings incorporate architectural elements resembling desert forts and towers or have distinctively Islamic decorative styles executed with modern materials.

Education has been a major focus of the Qatari government for many years. This focus led to the development of organizations such as the Qatar Foundation, which operates Education City. Located in the outskirts of Doha, Education City covers 14 million square meters (3,460 acres) and houses educational facilities from elementary school to research level. It is home to branch campuses of some of the world's leading universities.

Doha's demographics are unique in that the majority of residents are expatriates, with Qatari nationals forming a minority. Its citizens are comprised of peoples from various South Asian, Middle Eastern, North American, and European countries. The city's atmosphere is comfortably tolerant, with the native population living side by side with newcomers who have been attracted by economic and education opportunity. Qatar is a nation whose customs draw on its nomadic past and traditions that are centuries old. However, Doha's population is urban and coastal and its daily life is thoroughly modern. It has succeeded in blending different cultures and its citizens enjoy a peaceful and pleasant lifestyle.

The name "Doha" came from the Arabic ad-dawha, or the big tree, a reference to a prominent tree that is believed to have stood at the site where the original fishing village arose.

The capital of Qatar, Doha is located on the central east coast of the peninsula on a sweeping, if shallow, bay, about three miles (five km) from east to west. It is the major administrative, commercial, and population center of the country.

Its climate is very hot, with temperatures averaging over 104°F (40°C) from May to September, although during cool winter nights the temperature sometimes drops below 45°F (7°C). Humidity is variable. Dewpoints can reach above 25°C in the summer, when the city averages almost no precipitation, and less than an inch (25 mm) during other months.[1] Rainfall is scarce (average 70 mm per year), falling on isolated days mostly between October to March. Qatar has limited natural fresh water resources and has increasing dependence on large-scale desalination plants. 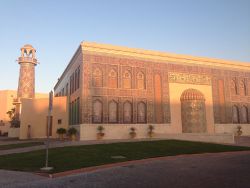 A mosque in Doha. 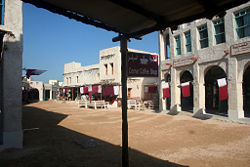 Oyster Pearl on the Corniche.

Qatar has been inhabited for millennia, and was part of the Persian Empire and Persian Gulf trade route connecting Mesopotamia and the Indus Valley, although the arid climate fostered only short-term settlements by nomadic tribes. Clans such as the Al Khalifa and the House of Saud (which would later ascend thrones of Bahrain and Saudi Arabia, respectively) swept through the Arabian Peninsula and camped on the coasts within small fishing and pearling villages. In the 1760s, members of the Al-Khalifa of the Utub tribe migrated from Kuwait and central Arabia and established a pearling and commercial base at Zubarah in the north of Qatar.

A small village located in the northwest of the area that was to become Doha, possibly founded by Sudanese refugees from Abu Dhabi, and used as a port for Persian Gulf pirates, was named Al-Bida in 1850.

During the nineteenth century, when the British sought out Qatar and the Persian Gulf to help their colonial interests in India, the Al Khalifa clan reigned over the northern Qatari peninsula from the nearby island of Bahrain. In 1867, during a war between Qatar and Bahrain, in which Abu Dhabi was assisting Bahrain, Doha was severely damaged.

In 1868, at the request of Qatari nobles, the British negotiated the termination of the Al Khalifa claim to Qatar, except for the payment of tribute. The British installed Muḥammad ibn Thani Al Thani, the shiekh of Doha, as the ruler of Qatar. Piracy was reduced.

The tribute ended with the occupation of Qatar by the Ottoman Turks in 1872, when the Al Khalifa family moved to Bahrain. In 1882, al Rayyan built the Al Wajbah fortress in southwestern Doha. The following year, Sheikh Qassim led a Qatari army to victory against the Ottomans.

Qatar became a British protectorate in 1916, and Doha was made capital. In 1917, Sheikh Abdulla Bin Qassim Al-Thani built the Al Kout fortress in the center of the city.

During the early twentieth century, much of Qatar's economy depended on fishing and pearling, and Doha had about 350 pearling boats. But after the introduction of the Japanese cultured pearls in the 1930s, the entire region suffered a depression and Qatar plunged into poverty.

Oil was discovered there in the late 1930s, but the exploitation was halted until after the Second World War (1939-1945), leading to economic transformation of Qatar. Prosperity enabled modernization of the nation. Doha's slums were cleared, and replaced with modern commercial and residential buildings. In 1969, the Government House opened.

In September 1971, Qatar became independent, with Doha the capital. In 1973, the University of Qatar opened, and in 1975, the Qatar National Museum opened in what was originally the ruler's palace. The Al Jazeera Arabic satellite television news channel began broadcasting in 1996, with headquarters and broadcast center in Doha. 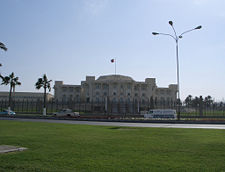 Qatar is an emirate in which the hereditary chief of state is the emir, and the head of government is the prime minister. A unicameral advisory council, or Majlis al-Shura, comprises 35 appointed members. No legislative elections have been held since 1970. Twenty-nine members are elected to the Central Municipal Council, which has limited consultative powers concerning municipal services. The first municipal council election was held in March 1999, followed by elections in April 2007.

Ruled by the al-Thani family since the mid-1800s, Qatar transformed itself from a poor British protectorate noted for pearling into an independent state with significant oil and natural gas revenues. Qatar was, in 2007, in the midst of an economic boom supported by its expanding production of natural gas and oil. Economic policy was focused on development of Qatar's non-associated natural gas reserves and increasing private and foreign investment in non-energy sectors. These enabled Qatar to attain a per capita income estimated at $80,900 in 2007—the highest in the world.

Much of Qatar's oil and natural gas wealth is visible in Doha, which is the economic center of the nation. Doha is home to the headquarters of the country's largest oil and gas companies, including Qatar Petroleum, Qatargas and RasGas. Doha was developing rapidly in 2008—mostly the result of Sheikh Hamad bin Khalifa's modernization program.

People who are not Qatari citizens are permitted to buy land in several areas of Doha, including the West Bay Lagoon, the Qatar Pearl, and the new Lusail City. Ownership by foreigners in Qatar entitles them to a renewable residency permit, which allows them to live and work in Qatar.

An increase in the city's population, of more than 60,000 between 2004 and 2006, has sent real estate prices skyrocketing. The Lusail City project, under construction north of Doha, will eventually house 200,000 people. Doha had over 50 towers under construction in 2008, the largest being the Dubai Towers, while 39 new hotels are joining Qatar's booming tourism market, adding about 9,000 new rooms by 2009.

With the main mode of transport being the car, Doha has an excellent road network for private cars and taxis. There is an extensive bus system, but there was no metro system operating in 2008.

The Doha International Airport is the hub of Qatar Airways, while the New Doha International Airport, under construction east of the current airport, was expected to have a capacity of 50 million passengers upon completion in 2015. The Doha Port is located just off the Doha Corniche. Its central location brings traffic and pollution problems, so a new port is planned.

An evening view of the Doha Corniche.

The demographics of Doha are unusual in that the majority of residents are expatriates, with Qatari nationals forming a minority. Most expatriates are from South Asian countries, mainly India, Pakistan, and Bangladesh, with large numbers from the Levant Arab countries, Egypt, North Africa, and East Asia, and others from the United States, Canada, France, South Africa, United Kingdom, and Norway. Forty percent of Qatar's population was Arab in 2004, 18 percent Indian, 18 percent Pakistani, ten percent Iranian, and others made up 14 percent.

Arabic is the official language, while English is commonly used as a second language.

Even though the official religion is Islam, the Emir allocated land in 2006 and 2007 to build churches. In March 2008, the first Catholic Church was opened, although Christian symbols were not displayed. Five other churches were under construction. Muslims made up 77.5 percent of Qatar's population in 2004, Christians 8.5 percent, and others 14 percent.

Education has been a focus of the Qatari government. In addition to Qatar University, established in 1973, the government has solicited other universities to establish campuses in Doha, most notably at Education City. These include: Virginia Commonwealth University, Cornell University, Texas A&M University, Carnegie Mellon University, Georgetown University School of Foreign Service, Northwestern University, College of the North Atlantic, CHN University, University of Calgary, and Qatar Leadership Academy.

Doha is also home to many international schools established for its expatriate communities, such as Qatar Academy, Qatar International School, the American School of Doha, Doha College, DeBakey High School for Health Professions, the Qatar Canadian School, and the MES Indian School. 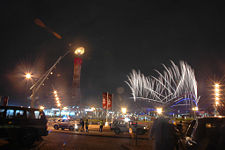 View of the Sports City during the 2006 Asian Games Opening Ceremony.

Doha has a number of sports stadiums, many of which were renovated for the 15th Asian Games, held in December 2006, for which Doha spent $2.8 billion in preparation. Doha also hosted the 3rd West Asian Games in December 2005, is expected to host the 2011 Asian Indoor Games, and will also host the finals for the 2011 AFC Asian Cup. Qatar is aiming to be the region's sports capital.

ASPIRE Academy, launched in 2004, is a sports academy which aims to create world-class athletes. It is situated in the Sports City Complex, which also includes the Khalifa International Stadium, the Hamad Aquatic Centre and the Aspire Tower. The MotoGP motorcycling grand prix of Doha is held annually at Losail International Circuit, located just north of the city.

Under construction is the Wall Stadium, which would become the world's largest underground stadium, dwarfing the Fjellhallen ice-hockey arena in Norway, and would be the main venue for the 2011 Asian Cup. Doha submitted a bid for the 2016 Summer Olympics. On June 4, 2008, the city was eliminated from the shortlist for the 2016 Olympics.

Doha is the capital, the largest city, and the economic center of Qatar. Much of Qatar's oil and natural gas wealth is visible there, and Qatar’s per capita GDP was estimated at $80,900 in 2007—the highest in the world. The city's wealth attracts talented people from around the world. An increase in the city's population, of more than 60,000 between 2004 and 2006, has sent real estate prices skyrocketing. Doha is known as the location of the first World Trade Organization negotiations, is home to Education City, an area devoted to research and education, and held the world's largest 2006 Asian Games. Qatar is aiming to become the region's sports capital. Large-scale desalination plants provide a model to all coastal cities challenged to provide sufficient potable water. The Qatar National Fishing Company, using modern motorized craft, is headquartered at the port, where a modern shrimp packing plant has been built.