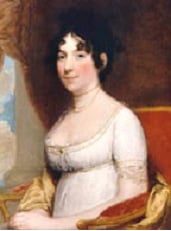 Dorothea "Dolley" Payne Todd Madison (May 20, 1768 – July 12, 1849), was the wife of President James Madison, who served from 1809 until 1817. She also occasionally acted as what is now described as First Lady of the United States during the administration of Thomas Jefferson—fulfilling the ceremonial functions more usually associated with the President's wife, since Jefferson was a widower. Dolley Madison was especially noted for her graciousness and charm as hostess during her husband's presidency. She was also her husband's confidante and adviser.

She was born in New Garden, a Quaker community in what is today Guilford County, North Carolina, on May 20, 1768, a daughter of John Payne, farmer and starch manufacturer, and his wife, Mary Coles. When Dolly Payne was fifteen years old, her parents sold their plantation, freed their slaves, and moved north. Dolley's father did not believe in slavery and used the money made from selling the plantation to set up a business. The Paynes moved Dolley and her seven siblings, Walter, William Temple, Isaac, Lucy, Anna, Mary and John settled in Philadelphia. This move coincides with a significant event in United States history, as 1783 marked the end of the Revolutionary War.

Dolley adjusted well to city life. Her father had set up an office and shop in the front room of their home and was working in the starch business. Dolley soon became a very beautiful woman, and was considered to be the greatest beauty of her era. However, she remained a modest person who did not take her physical attributes for granted.

On January 7, 1790, in Philadelphia, she married John Todd, Jr., a lawyer who was instrumental in keeping her father out of bankruptcy when his business soured and who found Mary Payne a position as the manager of a boarding house. The couple had two sons, John Payne and William Temple.

Tragedy struck many in Philadelphia in August of 1793. Yellow fever swept through the city and it was the worst epidemic to strike any American city at that time. A great number of people died, including Dolley's husband and second infant son. Although she also became ill, she eventually recovered after a long, slow fight. She then found herself a widow who had to care for her remaining son, Payne.

Dolley's lively outlook on life helped manage her grief through this tragedy. She again started to live life to its fullest. She attended several social gatherings in Philadelphia, which was then the capital of the United States. It was at one of these gatherings Aaron Burr introduced Dolley to Representative James Madison of Virginia, known as being one of the drafters of the United States Constitution. Even though James Madison of Virginia was 17 years her senior, and Episcopalian in background, they were married. The marriage, though childless, was notably happy; "our hearts understand each other," she assured him. Madison was notably patient with Dolley's surviving son, Payne, who at times was a difficult and troubled child.

Dolley felt right at home in the District of Columbia society. Before long she was asked by Thomas Jefferson, a widower, to serve as his hostess at White House social functions. Her gracious and outgoing personality served to rejuvenate the often stiff atmosphere of the Jefferson administration. The first eight years Dolley was in Washington, her influence ignited the position she would assume after James was elected president in 1808.

Once Dolley Madison became first lady in 1809, her status as the central figure of Washington society was confirmed. Dolley's vivacious manner and expansive memory for names and her ability to make everyone feel at home in the White House combined to attract many guests. Her lavish dinner parties were noted for the surprise delicacies served. On one notable evening a dessert known as a French concoction at the time, creme d'glace was served. Dolley had stunned the guests at state dinner guests with the first ever serving of ice cream.

She began holding Wednesday evening "drawing rooms" (receptions) that became immensely popular with politicians, diplomats, and the well heeled citizenry. Not only was Dolley renowned for her charming wit, but her grasp on political conditions and understanding of current events were significant. She proved an asset to James's political career in two ways: her outgoing demeanor complimented his reserved and stone faced disposition and her political insights often influenced his decision-making. Undoubtedly, Dolley was one of the reasons James won re-election in 1812.

The sweetness of the victory was short-lived. Despite the War of 1812 with the Great Britain, Dolley Madison continued entertaining at the White House until war virtually reached her doorstep. The dinner table was set for 40 guests the day she evacuated the White House. She and a few servants had remained, packing up valuable documents, silver, and other important state items. With limited space on only two wagons, she made choices about what to take and what to leave. Among the items that could not be left behind was the full-length portrait of George Washington by artist Gilbert Stuart. Purchased by the federal government for $800, the portrait was as much a symbol of the republic as any other object. Once the painting was safely on its way, Dolly Madison left the White House. Residents flooded the roads out of town. Even the soldiers assigned to protect the White House had fled before Mrs. Madison. The destruction was about to begin.

Much of Washington, D.C. was burned by British troops on the night of August 24-25, 1814, in retaliation for burning Upper Canada's Parliament Buildings in the Battle of York (present day Toronto). Most historical accounts reveal that they took pleasure in setting fire to the structure that represented a former colony and upstart nation.

Although Dolley Madison fled the White House only hours earlier, taking with her state papers, and what she considered irreplaceable, she had left the table set expecting to serve dinner to 40 military and cabinet officers accompanied by her husband. Instead, the British troops consumed the meal. They looted what remained in the house and then set fire to it. The house that had been the site of many happy occasions was ruined. For perhaps the first time in her life, Dolley Madison was distraught when she first returned to view the destruction.

All that remained were the scorched sandstone walls. The White House was left gutted. Only the exterior walls remained. A legend emerged that during the rebuilding of the structure white paint was applied to mask the burn damage it had suffered, giving the building its namesake hue. This is unfounded as the building had been painted white since its construction in 1798. Of the numerous spoils taken from the White House when it was ransacked by British troops, only two have been recovered, the painting of George Washington Dolley Madison rescued, and a jewelry box returned to President Franklin Delano Roosevelt in 1939 by a Canadian man who said his grandfather had taken it. Most of the spoils were lost when a convoy of British ships led by HMS Fantome sank en route to Halifax, Nova Scotia off South Shore (Nova Scotia) during a storm on the night of November 24, 1814. 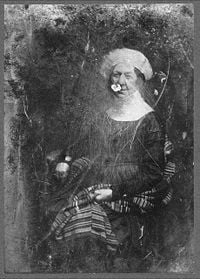 The only surviving photograph of Dolley Madison. Probably taken in 1846.

Although the Madison's would never live in the White House again, they were committed to the reconstruction of the house and to the resurrection of it as a symbol of the republic.

With the conclusion of his second term in 1817, James and Dolley retired to Montpelier his tobacco plantation in Virginia, which was not far from Jefferson's Monticello. He engaged in extensive correspondence on political affairs and served on the Board of Visitors of the University of Virginia for 17 years. Life on the plantation proved vibrant as Dolley continued to entertain guests as before. However, the prodigality of her son John, with whom both she and James were always too lenient, brought them financial problems. On June 28, 1836, James Madison died at the age of 85. Though childless, their 42-year marriage had been a remarkably blissful and happy one. Unfortunately, John Payne Todd's spending habits soon reduced his mother almost to poverty. This forced Dolley to sell both James's Continental Papers and Montpelier to pay the creditors. In 1837, Dolley returned to Washington and resumed her former status in the social life there. Dolley frequented numerous social and political events and was beloved by all. On July 12, 1849, Dolley Madison died in Washington at age 81. She was buried in the Congressional Cemetery with all the Washington dignitaries attending. Later her remains were moved to Montpelier next to her husband's.

Retrieved from https://www.newworldencyclopedia.org/p/index.php?title=Dolley_Madison&oldid=1007275
Categories:
Hidden category:
This page was last edited on 16 October 2017, at 19:39.
Content is available under Creative Commons Attribution/Share-Alike License; additional terms may apply. See Terms of Use for details.