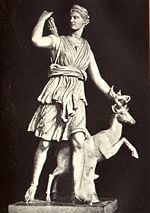 The Diana of Versailles

In Roman mythology, Diana was the goddess of the hunt, mythologically similar to the Greek goddess Artemis. The daughter of Jupiter and Latona, Diana was born with her twin brother Apollo on the island of Delos.

A goddess of both chastity and fertility, and also of the moon, Diana's cult became popular throughout the ancient Roman empire, both among the nobility and the lower classes. She was the patron of slaves, who could find sanctuary in her temples, and of women seeking to conceive healthy children. Eternally young and beautiful, she was known to possess a quick temper and fiercely defended her virginity.

Often portrayed with bow and arrow and accompanied either by a deer or hounds, Diana was the goddess of both wild and domestic animals. Her temple in Ephesus was one of the wonders of the world.

In later centuries, Diana figured in European myths of the female Wild Hunt. During the Renaissance, she became a popular figure in art, poetry, and drama. More recently, her early role as a strong female deity has been examined in academic discussions of the history of religions, and she has inspired a branch of the neo-pagan religion. She is an archetype of the competent, free-spirited, independent female. 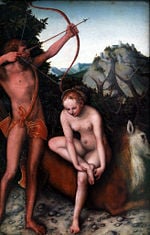 Diana and Apollo by Lucas Cranach

Although Diana may have once been a local forest deity in ancient Italy with a mythic origin of her own, she inherited the legendary birth story of her Greek counterpart, Artemis. Thus, when Jupiter's wife Juno discovered that Latona was pregnant and that Jupiter was the father, she banned Latona from giving birth on the mainland, any island, or any land under the sun. Latona finally discovered the barren, floating island of Delos, which was neither mainland nor a real island, and gave birth there to the twin gods Diana and Apollo.

Latona brought forth Diana, the elder twin, without struggle or pain and then labored for nine nights and nine days for Apollo. (Other versions of the story speak of one day and place of Diana's birth at Ortygia.) Diana, having been born first, assisted with the birth of Apollo, accounting for her connection to childbirth and midwifery, despite her eternal status as a virginal youth.

Goddess of many facets 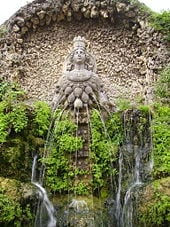 Diana huntress, by Houdon at the Louvre

Diana was the hunting goddess, associated with wild animals and woodlands. She later became a moon goddess, supplanting Luna; and the moon was an emblem of chastity. Oak groves were especially sacred to her. She was praised in poetry for her strength, athletic grace, purity, distinct beauty, and hunting skill.

Etymologically, "Diana" means simply "the Goddess," parallel to the name of Greek goddess Dione, although the two are not related mythologically. Despite her virginity, she was a goddess of fertility, worshiped especially by women seeking seeking conception and healthy birth. She was also the guardian of young children. Diana was regarded with great reverence by lower-class citizens and slaves, and runaway slaves could receive asylum in her temples. Diana was also a goddess of domestic animals.

Diana made up a trinity with two other Roman deities who, at the same time, manifested aspects of her own character and attributes: Egeria the water nymph, who was her servant and assistant midwife; and Virbius, the woodland god.

In paintings, bas-reliefs and statues, Diana is sometimes portrayed as accompanied by a deer, such as in the Diana of Versailles, as the patroness of hunting. The deer is also connected to the myth of Acteon (or Actaeon), who saw Diana bathing naked and gazed at her beauty in fascination (or in another version, attempted to rape her), whereupon Diana transformed him into a stag and set his own hunting dogs to kill him. In another myth, Diana accidentally killed Orion after Apollo became alarmed at a possible romance between his sister and the giant, and tricked Diana into a target shooting test, in which the far distant target was actually the head of Orion. Grieving at what she had done, Diana made Orion into a constellation in the sky with his hunting dogs, Canis Major and Canis Minor close by. 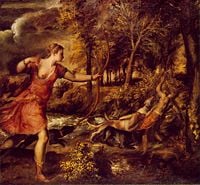 Diana defends her honor against Acteon

Diana's cult in Italy seems to have originated in the town of Aricia near Rome, where her priest, the Rex Nemorensis ("the king of the grove") remained, by the shores of Lake Nemi. There her simple, open-air temple was held in common by the several Latin tribes. Legend holds that a new priest could replace his predecessor by slaying him, and that men indeed battled to the death for this honor.

In Roman tradition, Diana was worshiped at a festival on August 13, the date upon which King Servius Tullius dedicated her shrine on the Aventine Hill in Rome in the mid-sixth century B.C.E. Being placed on the Aventine, and thus outside of Rome's sacred boundaries, meant that Diana's cult essentially remained a "foreign" one at this time, like that of Bacchus (Dionysus). Despite her popularity, Diana remained in this position and was never officially transferred to Rome as was the case with some other deities.

Some Roman patrons ordered marble replicas of the Anatolian version of "Diana of Ephesus," as the goddess of domestic animals. However, Diana was usually depicted by the Romans in her Greek guise, the goddess of the hunt.

Worship of Diana is also mentioned in the Bible. In Acts of the Apostles, Ephesian metalsmiths who felt threatened by Saint Paul’s preaching of Christianity, jealously rioted in Diana's defense, shouting “Great is Diana of the Ephesians!” (Acts 19:28). Her temple at Ephesus was one of the Seven Wonders of the World and was ultimately destroyed by a Christian mob led by Saint John Chrysostom in the early fifth century. 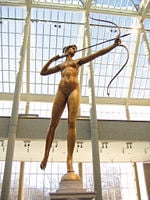 Diana, often posed as bathing as well as in her traditional guises, became a popular subject in Renaissance art. She and Apollo were sometimes pictured as a kind of pagan version of Adam and Eve. Since the Renaissance, the mythic Diana has often been expressed in the visual and dramatic arts, including the opera L'arbore di Diana. In the sixteenth century, Diana's image figured prominently at the Château de Fontainebleau, in deference to Diane de Poitiers, mistress of two French kings. At Versailles, she was incorporated into the Olympian iconography with which Louis XIV, the Apollo-like "Sun King," surrounded himself.

Diana's worship may be related in Early Modern Europe to the cult of the Scottish goddess Nicevenn (aka Dame Habond, Perchta, Herodiana). She has also been connected to myths of a female Wild Hunt. Female members of the sect known as the Benandanti ("Good Walkers"), in their struggles against evil witches during the sixteenth and seventeenth centuries, believed that they left their bodies during the night and communed with Diana or a similar goddess in defeating witchcraft.

In Italy, the religion of Stregheria embraced Diana as Queen of the (good) Witches, who were wise women and healers. According to Stregheria myths, Diana was the Mother Goddess who created the world out of her own being, having in herself the seeds of all creation yet to come.

Both the Romanian word for "fairy," zânǎ and the Asturian word for "water nymph," xana, may be related to the name of Diana.

There are also references to Diana in popular literature. In Shakespeare's play, Romeo and Juliet, with its theme of the tension between chastity and romance, contains many references to Diana. Diana is also a character in the 1876 Leo Delibe ballet Sylvia. The plot deals with one of Diana's nymphs who is sworn to chastity, featuring Diana's assault on Sylvia's affections for the shepherd Amyntas. 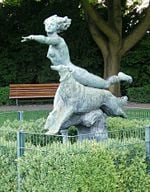 Diana remains an important figure in contemporary thought. Feminist writers sometimes portray Diana as having originated in a mother goddess worshiped in prehistoric times when societies were organized along matriarchal lines. A branch of neo-paganism known as Dianic Wicca is named for her, characterized by an exclusive focus on the feminine aspect of the Divine.

In Jean Cocteau's 1946 film La Belle et la Bête it is Diana's power which has transformed and imprisoned the beast. In comic book lore, the character of Wonder Woman is a descendant of the gods, whose alter ego is named Diana Prince. In a broader sense, Diana has been seen as the archetype of the free-spirited, independent female and warrior-maiden characters that have become ubiquitous in contemporary popular literature, film, and video games.

Retrieved from https://www.newworldencyclopedia.org/p/index.php?title=Diana_(mythology)&oldid=972698
Categories:
Hidden category:
This page was last edited on 16 August 2013, at 15:38.
Content is available under Creative Commons Attribution/Share-Alike License; additional terms may apply. See Terms of Use for details.