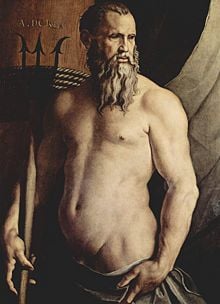 Neptune (Latin: Neptūnus) was the god of the sea in Roman mythology. He is most identifiable as a tall, white-bearded figure carrying a trident, a three pronged fisherman's spear. Fittingly, he is often pictured with fish, as well as with horses, another animal with which he is closely linked since he was also thought to oversee the sport of horse-racing. These horses drew the chariot in which he was said to travel over the sea. Like many of the figures of Roman mythology, Neptune was appropriated from the Greek tradition, and became analogous (but not identical) to Poseidon, the Greek god of the sea.

The worship of Neptune, as the Roman version of Poseidon, is another example of cross-cultural assimilation in the ancient world where a great deal of dialogue and syncretism among different civilizations took place—not merely strife and warfare.

The theonym neptune seems to have derived from the Proto-Indo-European base *(e)nebh- meaning "moist", which forms the base for the Latin nebula, referring to "fog, mist, cloud."[1] Originally Neptune was a god of the ancient Italians, who did not identify him as a sea god, as they recognized no god of the sort. Rather, Neptune was said to rule exclusively over fresh water. Neptune is one of the earliest Roman gods to have been identified with a Greek deity. His connection with Poseidon was officially sanctioned in 399 B.C.E. when the sibylline books ordered a ceremonial meal (or lectisternium) in his honor to win his good favor, as well as that of a limited number of other Greek figures such as Apollo and Hercules.

It was once thought that the Roman conception of Neptune owed a great deal to the Etruscan god Nethuns, who held jurisdiction over wells and later on all bodies of water in that mythological system. However, more recent linguistic research has suggested this is not the case, as Neptune was already worshipped by Latins and Italians before the Etruscans had developed Nethuns; thus, it is more likely that Nethuns was influenced by Neptune.[2]

Neptune was a son of Ops, the earth mother, and Saturn, the prevailing sky god who ruled over the rest of the Roman pantheon. Fearing that his children would one day usurp him, Neptune was swallowed by his father immediately after his birth, as were the rest of his brothers and sisters. He was eventually saved by his mother, who tricked Saturn by offering him a large stone wrapped in swaddling clothes in place of her sixth child, Jupiter. Saturn was forced to vomit up Neptune and the rest of his siblings in the process of ridding the stone from his digestive system. In alternative versions, Neptune was thrown into the sea by his father as soon as he was born. Either way, Neptune went on to play a key role in assisting Jupiter in usurping Saturn and the rest of the Titans. After Saturn's defeat, the three brothers Jupiter, Pluto and Neptune divided up the universe among themselves, assuming jurisdiction over the sky, the underworld and the sea, respectively.

Neptune was commonly characterized in myth as a violent, ill-tempered character. In this way, he represents the tempestuous nature of the ocean waters, and, like the sea, often displays a destructive nature. His imperious character even lead to designs upon Jupiter's position as king of the gods; at one point he attempted to overthrow Jupiter with the help of Juno and Minerva, although he ending up failing in his task.

Much like Poseidon in the Greek tradition, Neptune was also viewed by the Romans as a particularly lascivious character, entertaining innumerable conquests of goddesses, nymphs and mortal women. Even when his attempts were not successful, Neptune was not hesitant to take the female he was pursuing by force. This included his sister Ceres, the goddess of plants, who hid from Poseidon's persistent advances by taking the form of a mare. Neptune promptly assumed the form of a horse himself and proceeded to rape her. This encounter resulted in the birth of a daughter as well as a black mare. All in all, Neptune's numerous extramarital affairs bore him many sons and daughters, including notable figures such as Atlas, Orion and the Pegasus. His own wife, the relatively obscure Salacia (who may have been the goddess of the salt water in ancient Italy) by most accounts bore Neptune three children, including Triton, the merman, who wielded a trident much like that of his father.

Neptune was originally a minor god in the Roman pantheon, responsible for fresh water and irrigation, in opposition to Oceanus, god of the enormous river which was believed in classical antiquity to circle the world. However, Neptune's status among the other gods was bolstered significantly once he came to be identified with the Greek god Poseidon in 399 B.C.E. From this point on, Neptune held jurisdiction over the sea and all things related to it. Although in earlier times it was the god Fortunus who was thanked for naval victories, Neptune had supplanted him in this role by at least the first century B.C.E. when Sextus Pompeius dubbed himself "son of Neptune." Like Poseidon, Neptune was also worshipped by the Romans as a horse god, under the name Neptune Equester, patron of horse-racing.

On the whole, Neptune was not elevated in cult status to the extent of his Greek counterpart. Nonetheless, there were two temples dedicated to him in Rome. The first, built in 25 B.C.E., stood near the Circus Flaminius, the Roman racetrack, and contained a famous sculpture of a marine group by Scopas. Its location is no doubt influenced by Neptune's function as a patron of horses. The second, the Basilica Neptuni, was built on the Campus Martius and dedicated by Agrippa in honor of the naval victory of Actium. Neptune also had a sanctuary located between the Palatine and Aventine Hills where a stream once flowed. Generally, Neptune received much patronage from seafarers, who prayed to him in hopes that he would ensure their voyages were safe.

Neptunalia, a civic festival that celebrated control of the catchments of water and drainage, was dedicated to Neptune. The festival was held quite fittingly on July 23, during the peak of the summer when drought was an imminent possibility. Little is known about the nature of the festival, other than the fact that people constructed tents or huts from the branches of trees, which they most likely used for feasting and drinking. Also, during this day committees of citizens could vote on civil or criminal matters.

While the characteristics and functions of Neptune were borrowed almost entirely from Poseidon, the former god is perhaps the most readily alluded to in the Western world. Not only has Neptune been related to all things involving the water, but he as also become a synonym for the sea or the ocean itself, as in colloquial phrases such as that which refers to "Neptune's mighty roar."[3] More generally, Neptune has become the archetype for the consummate seafarer. This motif has been explored in a plethora of artistic depictions, including Agnolo Bronzino's rendition of Genoese admiral Andrea Doria (see picture above).

The name of the god was also given to eighth planet from the sun shortly after its discovery in 1846, not so much because of its particular properties, but due to the trend to name heavenly bodies after figures from classical antiquity.

Retrieved from https://www.newworldencyclopedia.org/p/index.php?title=Neptune_(mythology)&oldid=1087009
Categories:
Hidden category:
This page was last edited on 11 November 2022, at 16:21.
Content is available under Creative Commons Attribution/Share-Alike License; additional terms may apply. See Terms of Use for details.